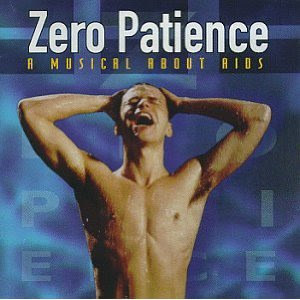 This is a great song from a strange, little-known semi-musical film called Zero Patience. It has many catchy South African mbaqanga-styled touches that make it live and breathe beyond this film and its seemingly dated concerns. It’s an awkward video, as can be seen here. But it’s a great tune that should have become much better known – for the right reasons – and one that stands up well today, some two decades later.

The catchy music is by Glenn Schellenberg, who acquired his PhD in Psychology at Cornell the same year as this film was made and went into academia. At last report, he is a full professor of Psychology at the University of Toronto. His research focuses on music learning and music cognition.

Zero Patience is a 1993 Canadian musical film written and directed by John Greyson (Urinal, Queer as Folk). The film examines and refutes the urban legend of the alleged introduction of HIV to North America by a single individual, Gaëtan Dugas. Dugas, better known as Patient Zero, was tagged in the popular imagination with the blame in large measure because of Randy Shilts's history of the early days of the AIDS epidemic, And the Band Played On. The film tells its story against the backdrop of a romance between a time-displaced Sir Richard Francis Burton and the ghost of "Zero" (the character is not identified by Dugas' name).

Victorian adventurer and sexologist Sir Richard Francis Burton (John Robinson), following an "unfortunate encounter" with the Fountain of Youth in 1892, is 170 years old and living in Toronto, Canada. Burton, now living and working as the chief taxonomist at a Museum of Natural History, is searching for a centerpiece display for an exhibit in his Hall of Contagion. He comes up with the idea of featuring AIDS and the Patient Zero hypothesis. Accepting the popular belief that Zero introduced the virus to North America, Burton sets out to collect video footage from those who knew Zero to support the hypothesis. When Zero's doctor (Brenda Kamino), mother (Charlotte Boisjoli) and former airline colleague Mary (Dianne Heatherington), who is now with ACT UP, all refuse to demonize Zero, Burton manipulates the footage to make it appear as if they do and includes doctored photographs of Zero showing signs of Kaposi's sarcoma. He presents this preliminary version to the press.

The ghost of Zero (Normand Fauteux) materializes at a local gay bathhouse. No one can see or hear him, until Zero runs into Burton while Burton is spying on Zero's friend George and realizes that Burton can, although Zero does not show up on Burton's video camera. The two strike a deal; Zero agrees to help Burton with his Patient Zero exhibit if Burton finds a way to make Zero appear.

The two return to the museum where Burton makes a ridiculous attempt to seduce Zero to ensure his participation. Rejecting his advances, Zero examines some of the other exhibits (including displays on Typhoid Mary and the Tuskegee syphilis study) before finding an African green monkey, another suspected early AIDS vector. The monkey (Marla Lukofsky) angrily denounces Zero for scapegoating her just as he has been scapegoated. Zero turns to Burton and they make love.

Under pressure from his director and the exhibit's drug manufacturer sponsor, Burton steals Zero's medical records in hopes of discovering new information. Zero and Burton examine an old blood sample of Zero's under a microscope and discover Miss HIV (Michael Callen), who points out that the original study that was used to label Patient Zero as the first person to bring HIV to North America did not prove any such thing, but instead helped prove that HIV was sexually transmitted, leading to the development of safer sex practices. Under this interpretation, Zero could be lauded as a hero for his candor in participating in that original study. As Burton ponders this, an unknown fluid squirts from the eye pieces of the microscope, drenching Zero and making him appear on video. He joyously declares his innocence on tape but the effect only lasts five minutes before he fades away again. Zero angrily accuses Burton of not caring for him at all and only wanting to use him for the exhibit, then storms out.

Burton fails to complete the revised Patient Zero exhibit before its scheduled opening date. The museum curator substitutes the original presentation instead over Burton's protests, leading to a renewed rush of press scapegoating Zero. The night after the exhibit opens, Mary and other ACT UP members break into the Hall of Contagion and trash the exhibit. Zero returns and Burton explains that he tried to stop the exhibit. Zero forgives Burton but says he wants to disappear again completely. Zero merges with his disfigured video image and, smoking a cigarette inside the video, sets off the fire alarm. The sprinklers destroy the video player and Zero vanishes.

A major subplot involves George (Richardo Keens-Douglas), a French teacher and former intimate of Zero's. George is losing his sight to cytomegalovirus and is taking a drug that is manufactured by a company that, as a member of ACT UP, George is protesting. George struggles through the film to resolve his conflicted feelings over this, his guilt over abandoning Zero during the final days of his illness and his fear that the same thing will happen to him.

Zero Patience won a number of prestigious Canadian film awards. The film has been the subject of critical attention in both film theory and queer theory and is considered part of the New Queer Cinema movement.
Posted by Douglas Payne at 11:43 PM