“I Need Love” by Capricorn 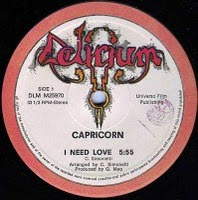 Today's disco discovery: Finally, here is one of the great tracks from the early 80s, when the great keyboardist/composer and former Goblin founder, Claudio Simonetti, was in his disco prime. Simonetti left Goblin after crafting some distinctive work with the group in Dario Argento’s Profondo Rosso/Deep Red (1975), Suspiria (1977) and Zombi (the European version of George Romero’s Dawn of the Dead) to pursue an interest in disco that led to much great Eurodisco by Easy Going, Vivien Vee, Kasso, Capricorn and others.

“I Need Love” from 1982 came pretty much at the end of Claudio Simonetti’s disco vacation. Giving up on his dancefloor vocation, the composer returned to film permanently in 1984 and, like his father, Enrico, went onto to some notable work for Italy’s preeminent genre filmmakers: Lamberto Bava, Umberto Lenzi, Sergio Martino, Ruggero Deodato and, of course, Dario Argento.

The song - which probably features the sexy Simonetti himself on spooky vocals - was originally featured on a Delirium 12-inch record, with a 5:55 extended vocal mix on side one and a same-time instrumental version of the song on side two. A six minute and 13 second instrumental version of “I Need Love” popped up on the 2004 Irma CD compilation I-Robots: Italo Electro Disco Underground Classics but the vocal version has, to my knowledge, criminally escaped notice on any legitimate CD collection. (Seems some adventurous soul could have jazzed this up nicely too.)

Both versions of the song can be downloaded here.
Posted by Douglas Payne at 1:14 AM