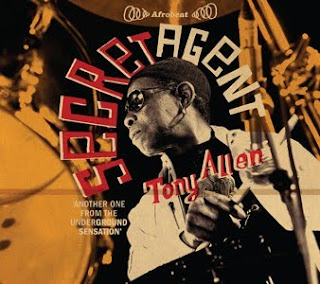 Tony Allen—best known for his work as drummer and musical director for Fela Anikulapo Kuti, one of Africa’s most influential artists—launches his latest attack of infectious Afrobeat groove music with his World Circuit / Nonesuch release of Secret Agent. Following its European release in 2009, Secret Agent, The Guardian proclaimed, “There is no question that Tony Allen is a genius, one of the greatest percussionists in the history of popular music,” while Observer Music Monthly said, “If you’re wondering why Afrobeat is hip, start here.”

Secret Agent is probably Allen’s best work since his brilliant and groundbreaking Black Voices (Comet, 1999). There is a lot of great music here, although there are a lot more vocals here than usual and a lot more lyrics in English than usual too. But the tracks are pure Afrobeat, with the huge horn parts, great funk lines and Allen’s original and patented rhythms. It’s hard to believe this guy came up on Gene Krupa and Art Blakey. But he takes what they did into a whole new direction that’s like nobody else in the world.

Together with Fela Kuti, with whom he played for 15 years, Allen co-created Afrobeat—the hard-driving, horns-rich, funk-infused, politically insurrectionary style that became such a dominant force in African music and is now one of Africa’s most popular styles among international listeners.

Allen produced Secret Agent, which was recorded with his touring band of musicians from Nigeria, Cameroon, Martinique and France. The music is four-square in the Afrobeat tradition—rhythmic tenor guitar, funky keyboards, call-and-response vocals, and full-throated horns—with a few twists (including keyboard player and arranger Fixi’s accordion on some tracks). Allen’s playing, meanwhile, draws on four different styles—highlife, soul/funk, jazz, and traditional Nigerian drumming. At Afrobeat’s heart is the beat, even more prominent now than it was in Fela Kuti’s legendary Afrika ‘70 band.

Secret Agent is Allen’s first release since he became a founding member of The Good, The Bad, and The Queen (alongside Damon Albarn, Paul Simenon, and Simon Tong). This association has helped encourage a recent upsurge of interest in Afrobeat. Over the years, Allen has appeared on dozens of albums, and his continued relevance—fans of hip-hop, funk, and jazz clamor for his recordings—speaks to the staying power of the Afrobeat music that he helped create in the 1960s.

A beautiful piece of African music that will appeal to jazz listeners as well as funk devotees.
Posted by Douglas Payne at 1:03 AM

BlueHost is definitely one of the best web-hosting provider for any hosting services you need.