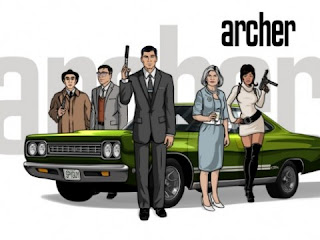 Mallory and Sterling – whose middle name is Mallory, by the way – are joined in each episode by Cheryl/Carol/Cristal (Judy Greer), a secretary who keeps changing her name to suit her sexual appetites, which apparently involve being strangled; comptroller Cyril Figgis (Chris Parnell) who clings to girlfriend Lana tighter than Saran Wrap; and Pam (Amber Nash), the heavy-set lesbian HR director who actually maintains a blog – with video! – revealing all of the ISIS personnel’s dirty laundry.

Created by Adam Reed and Matt Thompason, the demented brains behind Frisky Dingo, Sealab 2021 and Space Ghost Coast to Coast, this irreverent animated series is one of the most original – and funny – shows television has had in the last few years.

In only ten episodes, Archer has managed to capture a lot of cult attention and with good reason. It grabs the viewer – especially those adults who appreciate Monty Python-like potty humor – from the very first episode (“Mole Hunt”) and proceeds to get better as it goes on.

By the fifth episode, “Honeypot,” where Archer has to seduce a gay operative to recover an incriminating sex video of his mother, it’s funny just thinking about Archer. The quick wit, the witty quips and the almost unbelievable offend-anyone-for-any-reason humor is just laugh out-loud funny.

The enemy caricatures, especially the recurring KGB leader Maj. Nikolai Jackov (Peter Newman), who may be Sterling’s father, and ISIS competitor ODIN’s leader Len Drexler (Jeffrey Tambor), make Archer imminently engaging. With all the Bonds, Bournes, spy knock-offs and parodies out there, Archer has enough material to warrant a long, inspiring run (for those with long memories, Archer’s terrific retro opening strongly recalls the great opening titles of the Robert Wagner spy spoof of the sixties, It Takes A Thief). Here’s hoping that happens.

While the initial ten episodes which aired on FX Network earlier this year have not yet appeared on Blue Ray or DVD, all ten episodes are available to view on Hulu, Netflix and IMdB or to purchase through iTunes and Amazon.com.
Posted by Douglas Payne at 10:03 PM

There's a chance you're eligible for a complimentary $1,000 Amazon Gift Card.