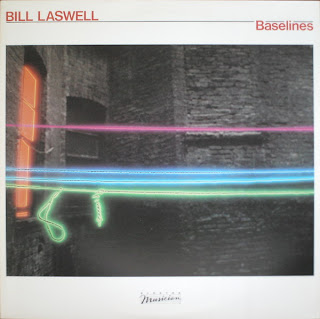 Just in case you forgot, Bill Laswell is one of the funkiest-ever bass players. No matter whether he’s playing jazz, pop, death metal, avant garde, ambient dub, whatever, this man can create a bass line that envelopes you to no end and makes you forget there’s even a name or a genre to the music you’re experiencing.

From very early in his multi-faceted career come these two funk-jazz classics which appear on his very first solo album Baselines (originally issued in the US in 1983 on the Elektra Musician label).

“Work Song” is a genuine classic. Aside from Laswell’s intoxicating lines on a number of different basses – which, taken together, has that unique something that Parliament’s “Flash Light” first suggested several years before – “Work Song” features Laswell’s fellow Materialist Michael Beinhorn on synthesizer and tapes, Ralph Carney (who I knew then as part of the great Waitresses aggregate) on baritone sax, George Lewis on trombone, the remarkable Phillip Wilson on drums and Daniel Ponce on congas. Beinhorn, Wilson and Ponce, of course, did many recordings with Laswell during this time. But “Work Song” ranks as one of their best.

“Upright Man” is another classic, recalling some of the better-known work of David Byrne and Brian Eno’s earlier My Life In The Bush of Ghosts. It features Michael Beinhorn on synthesizer and tapes , frequent Material collaborator Martin Bisi on drums and Daniel Ponce again on congas. “Upright Man” is a total downtown groover that suggests what would have happened if Chic, or at least Nile Rodgers and Bernard Edwards, had ever taken their groove into a progressive art-rock direction.

Baselines is a rewarding album that has even more exciting performances. It’s been issued by a few label on CD and should be easy enough to find on iTunes.
Posted by Douglas Payne at 12:59 AM