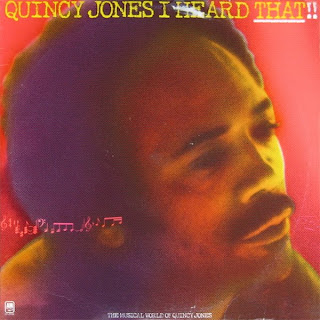 Here’s a great funk track from one of Quincy Jones’s least known albums, 1976’s I Heard That! Coming several years after the great composer, arranger, producer and svengali “resigned” from scoring films in 1972 and several years before he started working with Michael Jackson, I Heard That! began life as a monumental “evolution of black music” concept.

Somewhere along the way, either Q gave up or A&M got restless (it had been two years since his previous album, Mellow Madness, which was something of a hit in its day) and the double album that was finally issued featured two sides of new material and two sides of previously-recorded material – side three is called “Award Winning Side” ("Summer in the City," "Is It Love That We're Missin," "Body Heat" and "If I Ever Lose This Heaven") and side four is called “Grammy Winning Side” ("Killer Joe," the brilliant, but edited "Gula Matari" and "Walking in Space" from his CTI albums - also "Theme from 'The Anderson Tapes'"). The two sides of new material are hardly earth-shaking and certainly unlike anything evolutionary. But the new music, recorded in LA during three sessions in May 1976, contains much worthy material, including this lyrical little funk gem.

My guess is that all three of the keyboardists solo here plus Louis Johnson is (probably) featured on bass and Jerome Richardson solos briefly on flute at the end. It’s a melodic jam piece that really allows the various players, many of whom are plugged in, just go for it, and rather nicely too.

I would have also liked to post the album’s title track, a brief Quincy Jones/Dave Grusin funk collaboration featuring Grusin on ARP synthesizer with guitarists David T. Walker and Carol Kaye, bassist Chuck Rainey, drummer Paul Humphrey and Richard Tee on clavinet, Snooky Young on trumpet and Q’s brief-lived vocal group The Wattsline (Charles May, Sherwood Sledge, David Fridgen, Rodney Armstrong and Mortonette Jenkins), but it hasn't made it onto YouTube yet.
Posted by Douglas Payne at 10:48 PM

Do you need free Google+ Circles?
Did you know you can get these ON AUTO-PILOT AND TOTALLY FREE by registering on Like 4 Like?