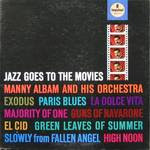 You couldn’t help being impressed listening to arranger Manny Albam (1922-2001) and many were, including Gerry Mulligan, Stan Getz, Coleman Hawkins, Joe Lovano, Dizzy Gillespie, and even Leonard Bernstein. The trouble is that not too many people have heard of Manny Albam, much less heard or even remember Manny Albam.

Sadly, while Manny Albam was a busy and active arranger in the 50s and 60s, he released very few albums under his own name. Even though all of Albam’s albums are studded with some of the greatest names in jazz and are speckled with some of the nicest orchestral jazz writing ever heard, sadly none of these records became enough of a hit to warrant much historical attention except to completists of certain players.

Fortunately, the tide has shifted recently with a number of Albam’s albums of the fifties seeing the light of day on CD, courtesy of the Spanish Fresh Sound label. Even if it’s only because ownership of the music has shifted into the “public domain,” there is something comforting about knowing this music is finally receiving the loving attention it so richly deserves.

Albam got his start as a baritone saxophonist in the orchestras of George Auld, Lee Castle, Herbie Fields and Les Elgart in the forties, eventually graduating to Charlie Parker’s notorious – and beautiful – “with strings” album in 1947. Soon the saxophonist took up arranging and worked with the bands of Charlie Barnet, Buddy DeFranco, Charlie Spivak and Stan Kenton. Albam showed a special predilection for vocalists, working with Ruth Price, Ella Fitzgerald and Jackie Paris. 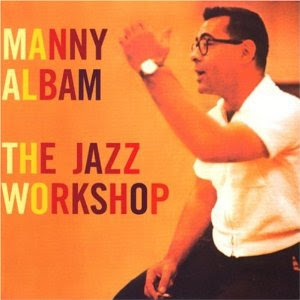 In addition to launching a fairly active career of all-star dates for the RCA label as a leader and in-house arranger, this record set Albam on to even higher profile gigs with Gene Krupa, Johnny Mathis, Coleman Hawkins, Woody Herman, Terry Gibbs and Candido.

By the early 1960s, the world’s best jazz musicians were plying their trade in New York City. The majority of the great jazz labels were doing all their recording in New York, where the musicians gigged (for TV and Broadway), played all the famous clubs (Birdland, the Village Vanguard) and got paying sessions recording a myriad of jazz, pop, easy listening and (sometime) classical records. All the great arrangers were there too. And by 1962, Manny Albam was one of the veterans.

Impluse! Records, launched earlier the previous year by Creed Taylor who had already left the label to head up the legendary Verve Records, which had been recently sold by Norman Granz to MGM, offered Albam a one-shot deal (Impulse! didn’t do multi-record deals in its early days) to record an album of movie themes. The jazz-does-Broadway fad was quickly dying out – mostly because they were running out of memorable musicals to cover – and with MGM’s purchase of Verve, it was assumed that jazz for that label would help promote the film company’s movies…so jazz-goes-to-the-movies seemed like the logical next step.

Manny Albam was the man for the job. He assembled an utterly amazing, seemingly godlike cast of New York session superstars including Johnny Coles, Joe Newman, Clark Terry, Bob Brookmeyer, Urbie Green, Phil Woods, Gene Quill, Oliver Nelson, Jim Hall, George Duviver, Eddie Costa and George Devens to tackle some of the film “hits” of the day (while the films may have been “hits,” it’s a stretch to say that many of the film themes heard here were ever hits).

Spurred on, perhaps, by Eddie Harris’s surprise (and well-done) hit cover of Ernest Gold’s “Exodus,” Albam’s program opens with this unusually jazz-worthy theme, a crossing of 12/8 and 4/4 lines that predate the odd time signatures Don Ellis later proffered with his orchestra. Albam’s arrangement is a little more militaristic than Harris’s, but in a way that would not sound unfamiliar to the spy-jazz lovers of Mancini’s Peter Gunn, especially mid-way into things when Albam breaks the band into an all-out rocking full-tilt swing of great orchestral writing. Johnny Coles on trumpet, Phil Woods on alto sax and Eddie Costa on vibes all take exhilarating solos.

The only other “jazz” oriented theme here is Duke Ellington’s tremendous yet too-little known “Paris Blues” – whose original soundtrack recording from May of the previous year also included future film composer Oliver Nelson, who is heard here too (Nelson himself covered the tune later that year for his own album Full Nelson). Ruddered by Bob Brookmeyer’s sensual trombone, there is some fine “noodling” (Albam’s word), again, from Costa, Coles and Woods.

The remainder of the program is decidedly odd for a jazz setting. But Albam makes it work extraordinarily well. His horn parts are sublime, well-crafted and always swing with a pleasurable ease that the players take to like children to sweets.

It’s Albam’s arrangements – most striking on the seemingly un-jazzy “Exodus,” “Majority of One,” “The Guns of Navarone” – and the tremendously high level of section playing and economical improvisation that make Jazz Goes to the Movies so worthwhile. It’s a too-brief achievement (totaling only half an hour of music) that never made much of a wave in the ocean of orchestral jazz of the period and, subsequently, has yet to find life in the CD generation but is worth tracking down for the high-grade of orchestral jazz it presents.

Albam went onto to work with Curtis Fuller, Coleman Hawkins, Zoot Sims and Oscar Peterson before becoming “musical supervisor” for Sonny Lester’s Solid State Records, which issued his follow up to Jazz Goes to the Movies, Brass on Fire (1966) and, his pièce de résitance, the even grander and more remarkable The Soul of the City (1966 – issued in full on the 1998 LRC CD titledSketches of Jazz: Music From The Book of Life, with 8 of the 12 tracks from Brass on Fire).

Manny Albam’s name sort of disappeared from records after this as he became much more engaged in education, though he continued actively arranging records for Solid State in the 1960s and Lester’s Groove Merchant label in the 1970s. Late in his career, he staged a comeback of sorts arranging for a variety of jazzers like Hank Jones, Bud Shank, Joe Lovano (Celebrating Sinatra) and The Danish Radio Big Band and such vocalists as Eileen Farrell and Nancy Marano.

Jazz Goes to the Movies is a winner.
Posted by Douglas Payne at 11:00 PM

Did you know you can shorten your urls with Shortest and make money for every click on your shortened urls.