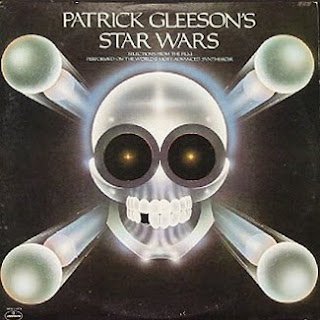 In 1977, synthesizer progenitor Patrick Gleeson released one of the countless tributes to John Williams’ ground-breaking Star Wars score on the Mercury label. But of all the many covers this score and its main theme received at the time and since, there are few that are as artistically successful and creatively pleasurable as this particularly entrancing endeavor.

Whereas so many others tried to make something commercial out of Star Wars - Meco, of course – and others tried to make the music something it wasn’t (jazz, for example, as Don Ellis attempted), and others still just reproduced the music as is, Gleeson recognizes Star Wars for the contemporary classic it was and how it provided the perfect sketchpad for his particularly colorful electronic palette.

Gleeson clearly admires and respects George Lucas as a mythmaker and one of the great all-time storytellers, John Williams as a composer of timeless, classical stature and Star Wars as one of the great products of Twentieth Century music. There’s no disco beats or R2D2 Moog nonsense here, although the Moog synthesizer obviously figures largely throughout. Gleeson takes this stuff seriously and delivers serious music too.

Tony Maygarden writes that Patrick Gleeson began experimenting with electronic music in the mid-'60s at the Mills College Tape Music Center using a Buchla synth and other devices. Upon hearing Walter Carlos' Switched-On Bach in 1968, he left his job in academics, bought a Moog synthesizer, and started Different Fur studios in San Francisco.

In 1971 Gleeson began playing with jazz great Herbie Hancock, and his Arp 2600 synth playing can be heard on Hancock's Crossings and Sextant [he is also part of other such Mwandishi band albums as Eddie Henderson’s Realizations, Julian Priester’s Love, Love and Bennie Maupin’s excellent Slow Traffic to the Right and Moonscapes, both of which were also produced by Gleeson too]. He toured with Hancock's band during this period. Gleeson has worked with many other jazz musicians, including Lenny White, Freddie Hubbard, Charles Earland, Joe Henderson and others. He last toured with Stomu Yamashta's band in 1977.

In 1976 he released his first solo album of synthesized music, Beyond the Sun - An Electronic Portrait of Holst's "The Planets" . The album is dedicated to "Robert Moog and W. Carlos." Walter Carlos also contributed the liner notes: "...Gleeson's grasp of color -- orchestral, textural, infinitely elastic shades of subtle grays and contrasts between families of timbre -- is simply stunning." A beautiful sounding recording, Beyond the Sun was nominated for a "best engineered recording-classical" Grammy in 1976.

Recorded at Different Fur, San Francisco in July 1977, Patrick Gleeson’s Star Wars is hard to classify. It’s equal parts jazz, rock and classical yet it sounds nothing like any of these three genres. It’s a mix that works quite nicely, though. There are plenty of superlative players on board here, transcending any mimicry far above plagiarism or disco copycatism. Other than Gleeson – on any number of keyboards – listeners here can witness Tower of Power’s Lenny Picket (sic) on the electronic lyricon and “E-mu,” Ronnie Beck, Billy Cobham, James Levi and (Headhunter) Harvey Mason on drums, a string section and arrangements by Gleeson, Charles Mims (Patrice Rushen) and Andy Narrel (sic – presumably the same guy now known as a steel drummer).

Much of the music is familiar, from the main theme (which Gleeson’s liner notes indicates shares a hip funk bass line that is very 1977 with a late 50s bass line to commemorate Luke Skywalker’s “throwback to the science fiction hero of the fifties”) to the well-known and oft-parodied “Star Wars Cantina Music” (which, in Gleeson’s hands, has a surprising flair for the big-band jazz Williams’ theme honors so nicely). Both of these performances, as expected, wound up as the 45-rpm single release from this album.

The superbly melodic “Princess Leia’s Theme” (also covered memorably by David Matthews on his excellent 1977 CTI album Dune) sounds like it could have come directly from Miroslav Vitous’ wonderful and hugely underrated 1976 album Magical Shepherd (which featured Herbie Hancock playing most of the keyboards Gleeson plays here), but is nowhere near as profoundly “out there” as Vitous’ album must seem to many. Gleeson offers up a tremendously tuneful performance of an exceptionally memorable Williams tune that probably deserved to find life – in this version or some other format – as a pop radio staple.

Gleeson shows an especial talent for art rock classicism in “The Tatooine Desert” (suggesting similar ideas put forth by Rick Wakeman, Keith Emerson and others) and “Droids” and caps things off with the surprisingly funky “Ben Kenobi’s Theme,” boasting a terrifically supple string arrangement that suggests (of all people!) Henry Mancini. My copy of the record ends with a synthesizer lick from “Ben Kenobi’s Theme” engraved into the vinyl groove which keeps on playing and playing unless your turntable has an automatic tone arm (the funny thing about this is I picked up my copy of the album recently at a new coffee/art/record shop in Cleveland called Loop!).

The album’s highlight is the transfixing “Death Star,” a worthy sample and one of the greatest examples of keyboard jazz-rock ever heard. Gleeson constructs an electronic concerto here, delivered with an orchestral precision that never ever feels forced, phony or fatigued. Gleeson weaves a string orchestra and voices into his exciting arrangement that takes the otherwise well-known theme light years away from its video-game familiarity.

Patrick Gleeson’s “Death Star” is a grand moment and only one of the best reasons to search for Patrick Gleeson’s Star Wars. There is a galaxy of other good reasons too. This record, "Patrick Gleeson's stunning and surreal interpretation of the music from the film" (the album jacket's hyperbole is actually right on the money this time), deserves to be much, much, much better known.
Posted by Douglas Payne at 12:18 AM

OMFG!!! I didn't hallucinate that leadout loop at the end of Side Two (Always.. always... always...)

I have been looking for that record for years. I found a lot of Gleeeson's other stuff: Rainbow Delta and so on. Nice catch!

Start following our signals right now & make up to 270% per day.