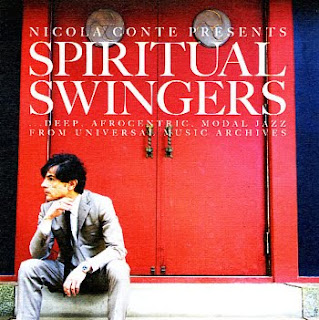 Compilations such as this are almost always disappointments. For me, there are far too many vocalists present. But Nicola Conte, whose most recent albums have swarmed in too many vocalisms, has assembled a rather terrific set of “spiritual swingers” here from the European-owned Universal Music catalog.

I’m not sure that all of the tracks presented here would qualify as many other people’s definition of “spiritual swingers,” including mine. But the music, as presented, is a remarkably coherent and surprisingly enjoyable set none the less.

You have to wonder if Conte knows what he’s talking about when he says that “many boppers turned their heads to discover consciously their African roots” – especially as so many of the artists present here are white or black artists appropriating white pop material. It doesn’t matter. Spiritual is as Spiritual does. One man’s floor is another man’s ceiling and so on.

This is a GREAT compilation…hitting on some lesser known and lesser compiled treats that sound absolutely stunning as a set. Even the vocal pieces have a great spiritual quality to them that are less about vocal acrobatics and more about musical qualities.

Maybe that was the idea. And it helps me understand musical philosophies that don’t necessarily accord with my own. This one works particularly well:

5. Baltimore Oriole / Lorez Alexandria (from For Members Only Argo, 1963)

11. Senor Blues / Anita O'Day with the Gary McFarland Orchestra (from All The Sad Young Men, Verve, 1961)

As Dusty Groove says: Spirit, swing, and a whole lot more -- a mighty collection of music all hand-picked by the legendary Nicola Conte! There's a deeply soulful groove to the whole thing -- and a touch of the exotic as well -- and the package really reminds us a lot of the great Gilles Peterson Universal collections that were out a few years back -- full of deep tones and rich colors, and proof that when you've got the right guy at the helm, a collection of older jazz tracks can be way more than just the sum of its parts!

Listen here.
Posted by Douglas Payne at 12:25 AM