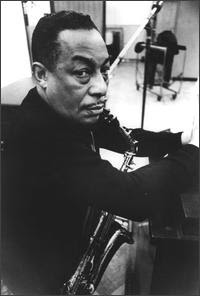 During the sixties, while actively touring, recording and serving as one of the star soloists in the relentlessly restless Duke Ellington Orchestra, the great alto saxophonist Johnny Hodges (1906-70) maintained a pretty active social life as a leader himself. Hodges often appeared on the Verve label and most frequently in the company of organist Wild Bill Davis (1918-95).

There was an influx of new talent coming into jazz during this period and many of the Johnny Hodges records of the sixties capitalized on this fact, to almost no fanfare then and far too little remembrance today.

Of course, a great deal of Duke Ellington’s music – and Billy Strayhorn’s too – can be heard here and superbly appreciated in a vastly different environment than Ellington often provided for the saxophonist.

Johnny Hodges had one of the most beautiful and distinctive sounds in all of jazz – a wail of love that was like one of the aural world’s most unique voices: sad and unyielding but powerfully uplifting all the same. Ellington himself wrote plenty of features for the alto saxophonist throughout Hodges’s long tenure with the orchestra, including “Jeep’s Blues,” “Hodge Podge” and, of course, “Isfahan.”

Wild Bill Davis proved to be an amiable and most remarkable foil for the saxophonist. Davis himself joined the Ellington orchestra from 1969 to 1971 and can be heard on some of Hodges’s last recordings with Ellington, namely on the exceptional New Orleans Suite (Atlantic, 1970).

The Spanish label Lone Hill Jazz has picked up many of Johnny Hodges’s records, especially those many forgotten releases of the 1960s, reissuing on CD a great number of wonderful performances that amount to something of a definitive study of the alto saxophonist during the period. The quality of the recordings is quite good and, in most likelihood, the releases are quite legitimate.

However you look at it, it’s great to have so much of Johnny Hodges’s formidable recordings available on CD. All of these recordings are wonderful to witness and a very highly recommended part of Ellingtonian musical lore. (Please note: the listings below correspond to tracks issued on the original LPs. None of the CDs detailed here contain any of the unissued tracks from the original recording sessions.) 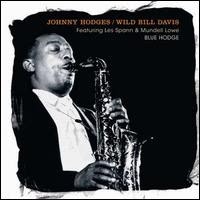 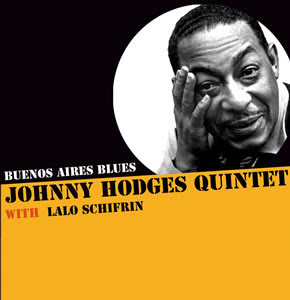 Buenos Aires Blues - Johnny Hodges Quintet with Lalo Schifrin: Combines the 1973 album Previously Unreleased Recordings (Verve V6-8834), a March 1963 recording that was not issued for some reason at the time, featuring the piano and arrangements of Lalo Schifrin, and the entire 1962 album The Eleventh Hour (Verve V6-8492), an August 1962 recording featuring Johnny Hodges paired with a string orchestra arranged and conducted by Oliver Nelson. On the 1963 recording, Hodges and Schifrin are accompanied by Barry Galbraith on guitar, George Duvivier on bass and Dave Bailey on drums (two Schifrin originals are here too: “Dreary Days” and “B.A. Blues”). The 1962 recording features Hodges and Oliver Nelson’s orchestra accompanied by Bernie Leighton on piano and organ, George Duvivier on bass, Osie Johnson on drums. Tracks: 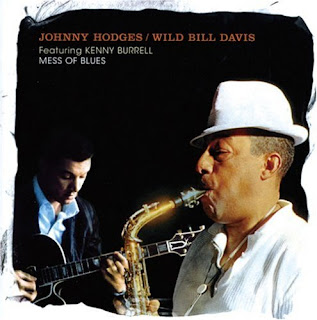 Mess Of Blues - Johnny Hodges/Wild Bill Davis Featuring Kenny Burrell: Combines the entire September 1963 recording Mess of Blues (Verve V6-8570) with Johnny Hodges on alto sax, Wild Bill Davis on organ, Kenny Burrell on guitar and Ed Shaunessey or Osie Johnson on drums with the three May 1963 Burrell tracks from Blue Rabbit (Verve V6-8599 – the remainder of this LP’s titles are included on the CD Blue Hodge above) featuring Hodges, Davis and Burrell as well as Jack Lesberg or Wendell Marshall on bass and Bobby Durham on drums and the entire January 1966 recording of Stride Right with Hodges and Burrell and Earl Hines on organ and piano, Richard Davis on bass and Joe Marshall on drums. Tracks: 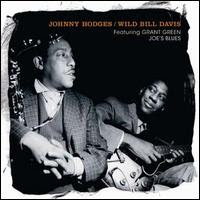 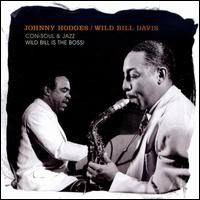 Con Soul & Jazz – Wild Bill Is The Boss! - Johnny Hodges/Wild Bill Davis: Combines the entire January 1965 recording of Con Soul & Sax (RCA LPM-3393) with Wild Bill Davis on organ, Johnny Hodges on alto sax, Dickie Thompson and Mundell Lowe on guitar, Milt Hinton or George Duvivier on bass and Osie Johnson on drums with the entire Wild Bill Davis & Johnny Hodges In Atlantic City (RCA LPM-3706) –which has been issued as a domestic CD – with Davis and Hodges accompanied by Lawrence Brown on trombone, Bob Brown on tenor sax and flute, Dickie Thompson on guitar and Bobby Durham on drums and the entire Blue Pyramid (Verve V6-8635) recorded on three occasions between November 1965 and January 1966 (in between the sessions which yielded the underrated session with Lawrence Welk, of all people!) with Hodges accompanied by Larry Young on organ (!), Bill Sacher on guitar, Bob Bushnell on bass and Joe Marshall on drums on one track and Lawrence Brown on trombone, Jimmy Hamilton on clarinet, Wild Bill Davis on organ, Billy Butler on guitar, Bob Bushnell on bass and Herbie Lovelle, Johnny Hodges, Jr. or Joe Marshall on drums. Also included on this double-disc CD are five of the nine tracks of the 1966 Johnny Hodges album Blue Notes (Verve V6-8680 – without Wild Bill Davis – the remainder of this LP’s tracks are issued on the CD Blue Hodge above) and the only four tracks of Johnny Hodges’s almost unknown 1963 album Sandy’s Gone (Verve V6-8561), arranged by Claus Ogerman, that feature Wild Bill Davis (“Sandy's Gone,” “Candy's Theme,” “The Caretakers Theme” and “Again”). Tracks: 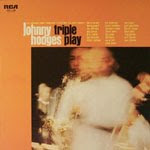 For more information - and many more Johnny Hodges recordings from the 1940s and 1950s - visit Fresh Sound Records, which also features the Lone Hill Jazz set by Billy Strayhorn and Johnny Hodges, The Stanley Dance Sessions, a compilation of the 1959 Strayhorn septet album Cue For Saxophone (with Hodges listed as "Cue Porter") and the 1961 Verve album Johnny Hodges, Soloist/Billy Strayhorn and The Orchestra.
Posted by Douglas Payne at 1:32 AM