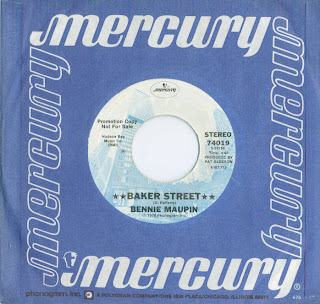 A real treat is this little-known 1978 45-only release of reed player Bennie Maupin’s cover of Gerry Rafferty’s hit “Baker Street.” Rafferty’s excessively popular song, which made saxophonist Raphael Ravenscroft one of the only saxophonists pop listeners of the day could name for about three months, dominated pop radio during the summer of 1978 and made it to #2 on Billboard’s Hot 100 and #4 on the Billboard Adult Contemporary chart.

The song, originally heard on Rafferty’s United Artists album City to City, his first solo album after the weird dissolution of Stealer’s Wheel (“Stuck in the Middle”), appears in its original form on countless 70s compilations and was also covered by such jazzers as Jon Faddis (Good and Plenty) and Maynard Ferguson (Carnival) – curiously, both trumpeters.

Recorded during the original hit single’s success in July 1978, Bennie Maupin’s cover was probably rush-released after his 1978 Mercury album Moonscapes was finished. To my knowledge, the song has never appeared anywhere on LP or CD. The Mercury single is backed with an edited version of the LP’s opening track “Nightwatch.”

Like Maupin’s two Mercury albums from 1977 and 1978, “Baker Street” is produced by Pat Gleeson, who likely performed some, if not all, of the keyboards heard here. The arrangement is decidedly funkier than the melancholy original and definitely in the Headhunters groove, which should have assured this song of far more airplay and cult appeal than it ever got.

Maupin, who is not known to cover pop tunes elsewhere, plays a variety of reeds on the piece (mostly background flutes), but plays Ravenscroft’s iconic sax lead and Rafferty’s vocal line on the soprano sax – a unique contrast to the original. No musicians are credited here but there is a great likelihood that the Headhunters groove is probably performed by fellow Headhunters Blackbird McKnight on the rock-ish guitar, Paul Jackson on the incredibly supple electric bass and Mike Clark or possibly Harvey Mason on drums and maybe even Bill Summers on percussion.

Maupin briefly solos but at slightly more than four minutes, the song just doesn’t feel like enough as is. It’s a shame this never caught on. It’s definitely worth tracking down.
Posted by Douglas Payne at 11:46 PM

Unknown said...
This comment has been removed by the author.
1:37 AM