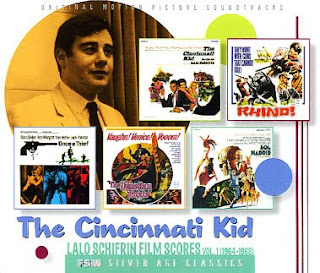 Much of the music included on this magnificent recording has never been available on vinyl or CD and while most of the work ranks as some of Schifrin’s earliest in American film, it also stands as some of the composer’s most enjoyable and memorable music in the medium.

Lalo Schifrin is one of the most distinguished composers of the Silver Age—and still going strong today. He may have been the most influential, however, when he broke into movies and television in the 1960s—his unique synthesis of jazz, symphonic, pop and avant garde styles was invigorating. For the first time, FSM presents an extended collection of Schifrin’s 1960s theatrical film scores, comprised of a quintet of M-G-M original soundtracks and related album recordings.

Rhino! (1964) was Schifrin’s first Hollywood score, written for an African safari adventure starring Robert Culp, Harry Guardino and Shirley Eaton. Schifrin was recommended by MGM Records (where he was a recording artist) as being the film studio’s answer for Henry Mancini on Hatari!—a tall order, but one Schifrin pulled off with a vibrant and exciting symphonic score, featuring exotic African instrumentation and several memorable themes and musical set pieces. Unfortunately, space limitations (among other things) prevented this set’s inclusion of the ultra-rare 45-rpm release of “Theme from Rhino!” b/w “Rhino Romp” that was issued by MGM in 1964 and Schifrin’s recording of “The ‘7 Faces of Dr. Lao’ Theme” recorded at the same February 1964 session and issued on a different, yet equally rare 45-rpm single.

Once a Thief (1965), Schifrin’s second feature score at M-G-M, is a corker of a jazz soundtrack for Ralph Nelson’s film noir starring Alain Delon, Jack Palance and Ann-Margret. Schifrin’s score, at turns dynamic and poetic, was heralded by jazz critics as one of the rare, authentic uses of the idiom in a Hollywood movie. The album includes both the original soundtrack (never before released) and Schifrin’s 1965 Creed Taylor-produced LP for Verve Records, Once a Thief and Other Themes (also including selections from The Man From U.N.C.L.E. and Joy House, and a few non-soundtrack pieces).

Disc three features what is probably Schifrin’s best-known score for M-G-M, The Cincinnati Kid (1965), the Norman Jewison film starring Steve McQueen as an up-and-coming gambler in 1930s New Orleans. Schifrin wrote a bluesy score centering on a theme for harmonica, sung (with lyrics by Dorcas Cochran) over the end titles by Ray Charles. The album features both the MGM Records album (a hybrid of original soundtrack and re-recorded selections) and the complete original soundtrack as recorded for the film, including many alternates and unused cues. Schifrin himself recorded the soundtrack album in 2002 for his own Aleph label (I was fortunate enough to do the notes for that set) and the composer insisted upon including Ray Charles’ original recording of the main theme from 1965 in this set of new recordings because Charles’ performance was “truly irreplaceable.”

Discs four and five feature two late-1960s films in which M-G-M tried to build feature careers for the stars from The Man From U.N.C.L.E., Robert Vaughn (in 1967’s The Venetian Affair) and David McCallum (in 1968’s Sol Madrid), by casting them (separately) in unrelated stories of international espionage. Schifrin’s scores to both films are excellent: pulsating, moody Cold War intrigue for The Venetian Affair (featuring cymbalom), and diverse, often Latin-flavored pop and jazz for Sol Madrid (alongside more traditional scoring).

While lyrics were written by Norman Gimbel for Sol Madrid’s main theme in a song called “Nice To Know,” there is no evidence that such a song was ever recorded and, subsequently nothing to that effect is included here.

Disc five concludes with an assortment of bonus tracks from Schifrin’s M-G-M work of the period, including themes from TV projects Medical Center (Schifrin’s first of two released versions of the theme), the extraordinarily rare and never-before released themes from Schifrin’s early 70s TV specials The Mask of Sheba and Earth II and a very rare recording called “The Haunting,” a very strange 45-only song released by MGM Records in 1963 that is alleged to be “inspired by the MGM Picture The Haunting” (a great film, yes, but this music could hardly be said to be a successful component or like-minded inspiration).

The entire five-CD set, save for a few tracks, is in excellent stereo sound, remastered from the original 35mm three-track scoring masters (for the original soundtracks) or ¼” two-track album masters (for the record albums). The excellent liner notes are by Schifrin authority Jon Burlingame. The amazingly comprehensive track-by-track commentary can be found at Film Score Monthly’s web site.

Amazing…and essential.
Posted by Douglas Payne at 2:19 AM