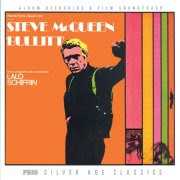 Bullitt is not only one of Lalo Schifrin’s finest film scores but one of the finest and most memorable soundtrack albums of the 1960s. Period. But, oddly, there is very little “score” for a film overflowing with such outstanding music.

The film stars Steve McQueen as San Francisco police detective Frank Bullitt, caught up with protecting a Chicago mobster from vengeful Mafia hit-men while dealing with an ambitious, sleazy politician portrayed by Robert Vaughn. With its riveting story, realistic settings, taut screenplay and quasi-documentary cinematography, it brought a new depth to McQueen’s portrayal of tough characters (this one on the right side of the law).

An essential part of the film’s success was its economical, nervous jazz score; the Argentinean-born, classically trained Schifrin was then at the height of the fame generated by his iconic Mission: Impossible television theme. The film is judiciously spotted, with relatively little “action” music (the famous car chase is unscored) but several atmospheric and evocative source cues. Schifrin himself described it as “very simple” and “completely based on the blues.”

Shortly after recording the film soundtrack, Schifrin led a separate recording for a Warner Bros. album featuring jazz greats Bud Shank (flute), Ray Brown (bass), Howard Roberts (guitar) and Larry Bunker (drums). The 1969 LP has been issued several times on CD (once in Japan and once in Europe) and Schifrin himself re-recorded the music with the renowned WDR Big Band in 2000 for his own Aleph label.

But it wasn’t until late 2009 when the film’s original soundtrack album was first issued in the US, combined with the film’s never-before issued score. Film Score Monthly (FSM) issued the truly definitive edition of the music to Bullitt, combining all 12 tracks from the original album (beautifully re-mastered from the original 1" eight-track master tape) with all 19 of the film score’s original cues – including the magnificent version of the main title theme as heard in the film, which ranks, along with Dirty Harry, among the very best Schifrin ever conceived (and which, prior to this release, could only be properly appreciated on Schifrin’s 1990 re-recording heard on the masterful Hitchock Master Of Mayhem).

While some score passages and cues are virtually identical to the record album, many of the film soundtrack’s softer, moodier cues were not chosen for the LP—or had certain passages rewritten. And some were dropped from the film itself, so have never been heard before. Several tracks, such as the acid rock-ish “Hotel Daniels,” the big-band swing of “Room 26” and the reflective samba of “The Aftermath of Love,” are particularly attractive revelations, even for those familiar with the film, that are superior to their album counterparts.

Unfortunately, space did not allow for the inclusion of a vocal version of the Bullitt theme called “The Great Divide” sung by Joanie Sommers and only issued on an extremely rare Japanese-only 45-rpm record. But the good folks at Film Score Monthly have done an otherwise typically beautiful job assembling and presenting this essential and finally-available music. Most highly recommended.
Posted by Douglas Payne at 4:33 PM

Thanks Doug for this informative article on the Bullitt soundtrack.
As I only curently have the vinyl LP I have just ordered the Film Score Monthly CD.