Dexter Gordon "One Flight Up" 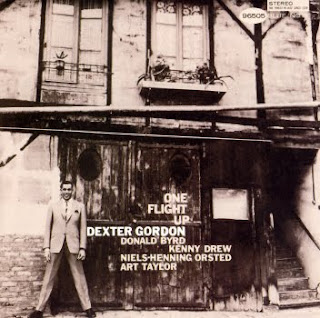 This remarkable disc, thankfully captured at Rudy Van Gelder’s Englewood Cliffs, New Jersey, studio on June 2, 1964, during one of tenor sax great Dexter Gordon’s “flights” back to the United States, is among one of the great milestones of early sixties jazz.

Dexter Gordon (1923-90) was one of bop’s greatest and first tenor saxists. He recorded prolifically throughout the fifties before chucking all of the racial (and other) problems of the United States for Europe in the early sixties.

Gordon lived in Copenhagen for many years, finding favor among many European audiences – and discovering a bevy of new musicians to ply his straight-ahead trade with (particularly NHOP) – before gathering film fame, rather beautifully, as ex-pat Dale Turner in Bertrand Tavenier’s sumptuous 1986 film ‘Round Midnight.

Gordon had already begun recording for Blue Note in 1961 when he moved across the pond. But he recorded a number of fine albums for the label (Doin’ Alright, Dexter Calling…, the classic Go, A Swingin’ Affair, the latterly-issued Clubhouse and Getting’ Around) between 1961 and 1965. Most all of these have much merit to them and should be easy to find on CD.

But, wonderful as most of ‘em are, none compare to the brilliant joy of One Flight Up. The centerpiece is trumpeter and participant Donald Byrd’s phenomenal composition “Tanya.” This magically magisterial piece, first shared with me many years ago by my great friend and University of Dayton scholar John P. McCombe, haunts me to this day.

It’s hard not to be swept up into the modal alchemy that Gordon, Byrd (the only currently surviving member of this group) and rhythm mates Kenny Drew (1928-93, who also left the U.S. in 1961 to move to Copenhagen, on piano), Niels-Henning Ørsted Pedersen (1946-2005, a.k.a. NHOP, whose name is rather bungled on the LP’s front cover) and the superior Art Taylor (1929-95, another American émigré to Europe, on drums) conjure here. At an unbelievably justifiable 18 minutes (and occupying the full first side of the original record), every one plays and solos with considerable authority and every minute is worth every second.

Kenny Drew’s great (but not “Tanya” great) “Coppin’ The Haven,” Gordon’s spunky “Kong Neptune” and the standard “Darn That Dream” round out the program that’s just perfect in every way. Jazz was meant to be captured exactly like this.

I recently replaced my 1989 CD release copy of Dexter Godron’s One Flight Up with the 2004 RVG edition and I am quite glad to have done so. All of those old Blue Note CDs don’t sound nearly as spectacular as these RVG editions (which kind of pisses me off – since this is another way the majors get us to buy albums we like over and over again).

This miraculous album deserves to be heard with the love and care RVG gave it in the first place. Thanks, Johnnie-o. I would never have known about this album – or Dexter Gordon, for that matter – without you.

And this is a great one.
Posted by Douglas Payne at 11:16 PM

Anonymous said...
This comment has been removed by the author.
4:08 PM

...wasn't this actually recorded in Paris, though?
I do think so. Also, this is my favorite Dexter version of "Darn That Dream" (although, now that I think of it, the one on "Swiss Nights" is also a contender).
Thank you.

Dex spent most of the 50's in jail on drug charges before expatriating to Paris. This album was actually recorded at CBS Paris under the direction of Jacques Lubin in 1964, who had also recorded Our Man in Paris with Dex the year before. This was not done in the states.