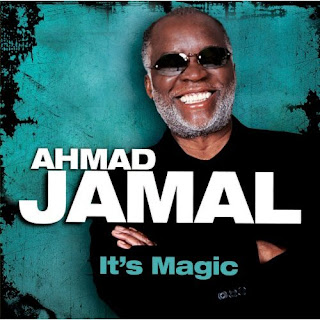 In the autumn of his years, the great pianist Ahmad Jamal has delivered a stunning legacy of momentous recordings – mostly, as late, as part of the French Birdology series of releases that have been distributed variously through the American labels Atlantic, Verve and Dreyfus Jazz.

This, in no way, negates the pianist’s huge and wonderful catalog on Argo/Cadet, Impulse, 20th Century (more on that later), Motown and Atlantic, during the 1960s, 1970s and 1980s. But, shockingly, so few of these albums are even available to be remembered or considered to be the classics that they so obviously deserve to be.

So, one must appreciate what one can get. There have been quite a number of these latter-day releases – many bearing titles like The Essence - but none have been nearly as successful and relentlessly enjoyable as 2008’s It’s Magic.

(The pianist, who turns 80 in July, releases his newest album this week, A Quiet Time. While I know nothing of what’s to come, I can only hope it’s as wonderful as the disc under scrutiny here.)

It’s Magic really is quite magical. Paired with long-time trio mates James Cammack on bass and the great Idris Muhammad on drums, this disc – like so many of Jamal’s Birdology discs – adds a guest to spruce things up, as it were.

Here, it is the great percussionist Manolo Badrena, formerly of Weather Report as well as a former sideman to jazzers Art Blakey, Carla Bley and Steve Khan as well as more pop-oriented concerns as Talking Heads, Blondie and Rolling Stones. The mix is, surprisingly and most perfectly ideal – especially for Ahmad Jamal.

Highlights are plentiful and include “Dynamo” (featuring a few stabs at “Eleanor Rigby”), “Back to the Island” (quoting from Jamal’s own hugely famous take on “Poinciana”), “Wild Is The Wind” (previously recorded by the pianist on 1968’s The Bright, The Blue and The Beautiful and Live In Paris 92) – coupled with “Sing,” “Arabesque” (which Jamal first played with bassist James Cammack on 1987’s wonderful Crystal) and the all-new tunes “Papillon” and “Fitnah.”

Throughout, Jamal is magisterial. The phenomenal Idris Muhammad on drums, long an aide de camp to Ahmad Jamal, brings his New Orleans heritage to the fore on the remarkably motivated “Dynamo,” “Wild Is The Wind/Sing” and “Papillon.” And that’s just when he’s most forthright. When he lays back, he’s still a presence to be reckoned with.

Manolo Badrena’s percussive additions really greatly aid “Swahililand” (which Jamal first performed on 1974’s Jamal Plays Jamal, then later reconvened for 1987’s Crystal and with Cammack and Muhammad for 2004’s After Fajr) and Jamal’s Rollins-esque “Back To The Island.”

Even the quieter material Jamal presents here (“Papillon,” “It’s Magic”) contains none of the florid over statements he has been known to employ of late – stuff which Miles Davis, long Jamal’s champion, would not have condoned. Jamal’s playing here is peerless, timeless and, well, magical.

Jamal is playing as beautifully as ever here. It’s Magic is timeless and worth many repeated listens.
Posted by Douglas Payne at 11:13 PM

Thanks Doug for letting me know about these 2 CD's which I will order. I discovered Ahmad Jamal in the 80' when I purchased Ahmad Jamal At The Pershing and still play. Can you answer a question for me? How come Jamal's first name is misspelled on the back cover of Miles Ahead With Davis?.
Your the Greatest.

Great post. Perfect writing, as always. Allow me to recommend you a superb DVD, "Live in Baalbeck," filmed with both Cammack and Muhammad. Their telephatic interaction is beyond words and a blessing to our ears and eyes.
Doug, I would love to hear your comments about Jamal's albums from the 70s, specially my two favorite ones: "Jamalca" (the first AJ vinyl I ever got when I listened to his version of "Ghetto Child" playing on a record store) and "Ahmad Jamal 73" (fantastic performances on Fender Rhodes of such tunes as "The World Is A Ghetto," "Peace at Last," "Children of the Night" and "Superstition.") Can't wait to see these albums reissued on CD, but I guess it will never happen unless Jamal becomes victim of a tragic death... Oh boy, oh boy...
Your fan, Arnaldo