Eric Alexander “Revival of the Fittest” 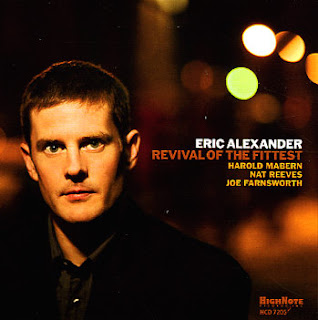 Tenor saxophonist Eric Alexander’s Revival of the Fittest is truly one of the finest jazz discs in quite some time.

Paired in a familiar format with the great, under-sung pianist Harold Mabern and long-time drum partner Joe Farnsworth, Alexander has come up with another fine album, one that sings more toward repeated pleasures than saleable formats.

There have now been some baker’s dozen albums recorded under Eric Alexander’s name since 1992 with pianist Harold Mabern and drummer Joe Farnsworth: Straight Up, Up, Over & Out and Mode For Mabes on Delmark; Heavy Hitters and Extra Innings on the Japanese M&I label; Live At The Keynote on the Japanese Videoarts label; The First Milestone, The Second Milestone, Summit Meeting and Nightlife In Tokyo on Milestone; and Dead Center, It’s All In The Game and this latest classic, Revival of the Fittest on the HighNote label (of course, there are several Cecil Payne and Jim Rotundi albums in here too, not to mention the wonderful Harold Mabern disc Kiss of Fire).

All are exceedingly interesting, exciting jazz excursions and highly recommended in the otherwise impoverished improvisatory arts. So is Revival of the Fittest. In fact, this particular disc ranks especially high among this terrifically compatible group’s very best efforts. Fittingly, Alexander has been provided with many other recording opportunities here and abroad –outside of this triumvirate – that keep his name in the forefront of jazz’s greatest leaders. It’s probable that Revival was only one of quite a few Eric Alexander or One For All recordings that came out in the past year.

But Revival of the Fittest is jazz at its very best – especially in this day and age. Eric Alexander proves his mettle by conceiving yet another wonderfully programmed and performed set, which is staged over some 56 minutes – about the length of a normal live jazz set – and not fatted out with filler designed to eat up all of a CD’s 75-some minutes playing time, something which too many recording artists feel inclined to do nowadays.

A number of originals (Alexander’s “Yasashiku (Gently)” and the two excellent Mabern tunes from years before) vies for attention with such unpredictable covers as Natalie Cole’s “My Grown-Up Christmas List” and the refreshingly lone standard, “You Must Believe In Spring.”

George Coleman’s tremendous and tremendously undervalued “Revival” (from his 1977 album Big George, also with fellow Memphis-born Harold Mabern) starts the program off in a particularly winning fashion. This too-little known original is fantastic and a terrific forum for Alexander to show off what he does so well. Eric Alexander is a great soloist who crafts interesting song-like patterns out of his improvisations. He makes this great post-bop tune his own by paring down the original horn section and commanding it with a forceful conviction that comes from a passion for melodically-centered intrigue. Joe Farnsworth gets an opportunity to show why he is probably one of the greatest timekeepers currently plying his trade for our collective enjoyment. Listen to how he commands a much more raucous version of “You Must Believe In Spring” than has ever been heard before.

The Ivan Lins bossa “The Island” (aka “Começar de Novo (Starting All Over)”), was apparently inspired by the late tenor great Stanley Turrentine’s wonderful cover of the tune on 1995’s T Time. It’s a gorgeous performance that elicits beauty from Alexander, Mabern, Farnsworth and the heretofore unmentioned bassist Nat Reeves – as does the ballad “Love Wise,” beautifully chosen (as so many tunes on the Alexander-Mabern albums are) by Harold Mabern, from a 1959 Nat King Cole record (To Whom It May Concern, conducted by Nelson Riddle, whose beautiful work for many including Frank Sinatra seems to have found favor with the pianist).

Another of the disc’s highlights is surely Harold Mabern’s signature-worthy “Too Late To Fall Back Baby,” which first appeared on the composer’s little-known 1978 album Pisces Calling (an album that also featured drummer Walt Bolden, on whose very nice eponymous 1977 album Mabern appeared throughout). Mabern himself contributes some of his signature groove work here – earthy, soulful and intoxicating like so much of his very best playing – and Alexander is inspired to offer, perhaps, his most stimulatingly musical solo on the entire disc.

Mabern also contributes his lovely “Blues for Phineas” to the program. The Phineas in question is fellow Memphis piano legend Phineas Newborn, who Mabern continues to idolize and pay tribute to – even though Mabern has probably surpassed Newborn in musical significance and influence over the years. The tune first appeared on Mabern’s third solo album, Workin’ and Wailin’ (Prestige, 1969). Alexander, again supplanting George Coleman, provides one of the nicest, most melancholy and melodious tenor tones heard in jazz since at least Hank Mobley (as a point of reference, pianist Harold Mabern also performed on Mobley’s wonderful 1965 album Dippin’).

Gorgeously captured by master technician Rudy Van Gelder on April 14, 2009, Revival of the Fittest displays the seriously artistic and wonderfully engaging musicianship that tenor great – yes, great – Eric Alexander has perfected over the last few years. This is excellent music and one of the best discs released in jazz in many a year.
Posted by Douglas Payne at 9:53 PM

Great piece, Doug. Eric was on The Jazz Session this week, if you and your readers would like to check it out:

Many thanks for the link to your terrific interview with Eric Alexander on The Jazz Session. I really appreciate your discussion with Eric about Harold Mabern and the enlightening conversation you provoked about Eric's music. He's a great speaker for the art. And, surely, his music speaks for itself. Thank you for bringing that to the fore.

It will be great to watch Memphis - The Musical,i have bought tickets from http://ticketfront.com/event/Memphis_The_Musical-tickets looking forward to it.