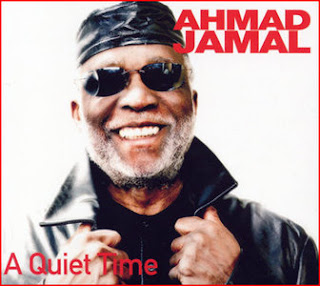 Legendary pianist Ahmad Jamal continues his spate of spellbinding discs with this, the fifth of his Dreyfus Jazz recordings. It is a terrifically enchanting 66-minute quartet performance featuring longtime associate James Cammack on bass, Manolo Badrena on percussion and, surprisingly, Kenny Washington on drums.

Washington, an unusually sensitive and supportive drummer, has been around for years and years and has played with everyone, from legends to upstarts. But this is the first time he’s ever been heard in the company of Ahmad Jamal.

It’s hard, at first, to accept the absence of drummer Idris Muhammad here. The drummer, who has been frequently heard in Jamal’s company since 1994’s Big Byrd, must have been unavailable on the three days in July 2009 when this disc was recorded, because he still appears with the pianist in concert performances. But Kenny Washington fulfills the chair with tremendous aplomb, never trying to replace or replicate what Idris Muhammad brings to Jamal’s groove, but almost suggesting Jamal’s earlier stick men, particularly, and most pleasingly, the hugely underrated Vernell Fourneier.

Ahmad Jamal, though, is truly remarkable throughout. Playing with the perception of an elder sage and the wit and fervor of a man a fraction of his age, the pianist has never sounded better. As a friend recently remarked to me, he continues to get better as he gets older.

While there may have been a few duds in his discography over the past two decades, his playing continues to grow most remarkably in strength and fortitude. This man, who turns 80 on July 2, has a human resilience that is enviable.

His artistry has evolved over the last six decades – 60 years! – so remarkably, in fact, that it’s hard to put into words. His melodic conceptions have become ever more fully formed. His playing veers farther from pet licks and predictable quotes into a language that is solely and soulfully all his own. He has also developed substantially over the years as a composer, yet, surprisingly, others don’t pick up on his now capacious catalog of tunes for further exploration.

Of the 11 tracks presented here, a whopping nine are Ahmad Jamal originals. All seem to be brand new compositions with the exception of “Tranquility,” which served as the title track to a 1968 Ahmad Jamal album on ABC-Paramount. The highlights here are plentiful and include “Paris After Dark,” “Flight to Russia,” “Poetry,” “My Inspiration,” “After JALC,” “A Quiet Time,” “Tranquility” and the utterly lovely “The Blooming Flower.” Jamal also spins two very personal takes on Randy Weston’s “Hi Fly” and the old chestnut “I Hear A Rhapsody,” patently making the tunes his own as he has done so often elsewhere before.

The only complaint that could possibly be lodged against this otherwise wonderful recording involves the odd and thoroughly ill-placed percussive accents, sometimes suggesting birds, flushing toilets and psycho effects out of Dirty Harry, that litter the disc unnecessarily. The guilty culprit is the great Manolo Badrena, who has provided percussive inflection to Jamal’s music as far back as Rossiter Road (1986) and as recently as It’s Magic (2007). Never have his treatments sounded as out of place and ill fitted as they do here on more than several occasions – particularly on many of the song’s finales (in all fairness, the pianist’s otherwise lovely 1987 album Crystal suffers from the same problem, but Willie White was the culprit there).

It’s not enough to put anybody off an otherwise beautiful album. A Quiet Time isn’t the snooze-fest the title may suggest. It is an excellent and engaging document that beautifully elucidates what real piano jazz is all about. Outstanding.
Posted by Douglas Payne at 10:59 PM