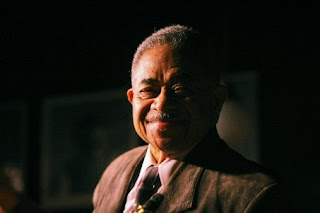 Frank Wess (b. January 4, 1922 in Kansas City) is one of the most recorded reed players in all of jazz. From his earliest recordings with Billy Eckstine in the mid forties and his reign as multi-reedman in Count Basie’s orchestra from 1953 to 1966 to his stint with Clark Terry’s big band from the late sixties to the mid seventies and all of the sessions in between and since (Duke Ellington, Quincy Jones, Frank Sinatra, etc.), there is no shortage of Frank Wess that can be heard out there.

Sadly, Frank Wess – who just celebrated his 88th birthday – has recorded only sporadically as a solo artist and, as a result, is not known as the great soloist that he deserves to be, nor is he regarded as highly as some of his other fellow reedmen are.

In the fifties, Wess, who had become known as a tenor sax player, began to specialize more on the flute and he developed a distinctive, muscular tone that had really never been heard before or since on the instrument, which has the unfortunate reputation for the especially effete or too pretty. Indeed, very few of jazz’s few flute players are celebrated for their special talents – and multi-reedists like Charles Lloyd, who is an especially commanding flautist, never play this wind instrument as often as they should.

Wess led several dates featuring some of jazz’s greatest names on Commodore and Savoy in the fifties, a few dates on Prestige in the early sixties (including the great Southern Comfort, arranged by Oliver Nelson) and didn’t resurface as a leader until two dates he did for the small Enterprise label in 1973.

Enterprise, which was distributed by the Memphis-based Stax label – whose catalog is currently owned by Concord Records in the US and Universal Music in Europe – seemed to exist from about 1969 to 1973 and released some rather obscure albums that hardly anyone remembers nowadays. Wess had two albums issued for the label, both of which seemed to proudly hail from Memphis, for no easily discernable reason.

Popular flautist Herbie Mann’s success probably had a great to do with the release of these two albums. Indeed, the conception of the two Enterprise albums mirrors several facets of Mann’s work of the time, particularly Mann’s undeniably great Mississippi Gambler (Atlantic, 1972), which was coincidentally also recorded in Memphis.

Lest it be forgotten, Mann and Wess were also both part of the New York studio scene in the fifties and recorded together on albums for A.K. Salim (1957), Billy Taylor (1959) and Count Basie (1960). And CTI was also having much success with flautist Hubert Laws at the time. So albums led by a flute player of Frank Wess’s caliber seemed like a good idea at the time. It’s doubtful anyone noticed.

Wess again disappeared as a leader, only to resurface on several albums in the eighties, beginning with 1981’s Battle Royale, and the nineties (a few, appropriately enough, for the Concord label) all the way up to a forthcoming CD Wess guests on by guitarist Paul Meyers, recorded in 2008.

Still, there’s some good music to be heard on these two Enterprise albums, which some – pardon the pun – enterprising label like Wounded Bird would be justified in combing onto one very nice CD. 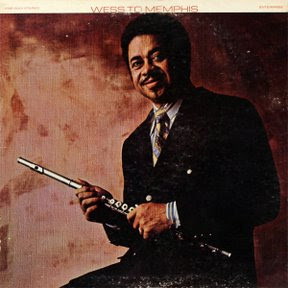 Wess To Memphis (Enterprise – 1973): Mixing some cop show funk with a stew of surprisingly outdated but outstandingly conceived pop hits, the first of Frank Wess’s two Enterprise albums is a more compelling jazz flute statement than much of what Herbie Mann cranked out during the period. Wess is clearly a much more inspired and inspiring player. He fits into this down and dirty groove particularly well; rather like it is second nature and not just a commercial pretense. Aside from Wess, there are no musician credits here other than alto sax legend (and one of the two co-producers) Eli Fountain, who is present on “Ooh Child” and “Fool on the Hill.” Fountain, who was heard to good effect with Houston Person around this time too, adds a particularly soulful touch to the proceedings. There are also no arranger credits. But whoever is at the helm makes tired old pop crap like “Ooh Child,” “Signed, Sealed and Delivered” and “Fool on the Hill” sound far more compelling than a quick glance over the song titles could possibly suggest. The only other soloists to be heard here are an unnamed and particularly swinging vibist on “Under Hog,” “Catchy” and “Wessward Ho” and a good, principally behind-the-scenes guitarist of the wah-wah variety. Highlights include Don Davis’s “Under Hog,” Ray Bryant’s ultra-funky “Cubano Chant,” a bewitching electric-funk version of “Willow Weep For Me” and Davis’s groovy “Catchy.” The album’s key moment, though, is the sinewy groove “Wessward Ho,” credited to Don Davis, Eli Fountain and Rudy Robinson – one of the 70’s finest and least-known jazz-funk nuggets. While Wess To Memphis contains much that is nice, “Wessward Ho” alone is worth the price of the album. Available from the great Smooth at My Jazz World. 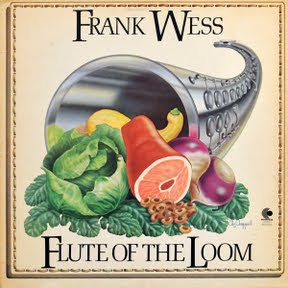 Flute Of The Loom (Enterprise – 1973): The second of Frank Wess’s two Enterprise albums is a less comfortable mix than the previous album of orchestrated jazz (not present earlier) with some all-out funk. This one is also said to have originated in Memphis, and much of it may very well have been recorded at the same time as the first album. Here, Wess contributes more of his own compositions and Chico O’Farrill, Jimmy Roach and Rudy Robinson are listed as providing the varying arrangements. The album is more overtly orchestral than before and the program isn’t as seemingly familiar as the previous Wess album. But the orchestral embellishments which pervade the record, while never particularly obtrusive, are not really necessary or that pleasing either. While Wess displays his typical prowess throughout, not too much of interest results. Curiously, despite the album’s not-too-flattering pun, Wess reverts to sax on three numbers, his own “Arundelle,” the variously titled “Flowers”/”Fading Flowers” and the standard, “When I Fall In Love.” Again, none of the participating musicians are named but a guitarist is nicely featured on Wess’s “Trezia” and “Arundelle” and vibes are heard to solo on “Wade in the Water.” The highlights here are more minimal than before and include “Get on Board (The Train Is Coming),” the funky “Wade in the Water” (which would fit perfectly on Wess To Memphis) and “I Know What’s On Your Mind,” with expert string and horn work that Gary McFarland would have provided had he lived that long and thumping great Chuck Rainey-like bass work. It just goes to show that great playing, which Frank Wess delivers in spades here, does not necessarily add up to a great album, which is something Flute of the Loom is not. Available from the great Smooth at My Jazz World.
Posted by Douglas Payne at 2:02 AM

Get all the best spirits and wines at Duty Free Depot!