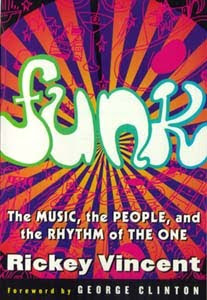 Rickey Vincent’s 1996 book Funk had long been on my radar, as a good book on Funk was absolutely necessary. But maybe I just figured that either I no longer cared about Funk or, worse, Funk no longer mattered.

Perhaps I was looking for more of a record guide (which is never a satisfying endeavor – and one has since appeared) or perhaps I just wasn’t prepared to dig into the definitions or the origins of the Funk. I just wanted to get to it, whatever it was. Bad thinking all the way around.

Recently, while browsing a great little book shop in the Tremont neighborhood of Cleveland, Ohio, Visible Voice Books, I accidentally stumbled across a used copy of the book for only six dollars, complete with someone’s insert defining Funk terms.

Funk – The Music, The People, And The Rhythm Of The One is, simply, a superb text and the single-most essential history of this music that’s really never, ever been give its proper due outside of its own practioners and fans (who became increasingly white when Funk had a resurgence in the mid nineties).

The book opens with a fascinating foreword by P-Funk overlord George Clinton, praising Rickey Vincent for putting Funk in perspective and showing there were many other sources of the Funk worthy of their due.

Indeed, Vincent takes a long time getting to the P-Funk dynasty (starting on page 203) and he makes it clear there’s lots to cover before you can even mention Clinton’s crew. But then Vincent also spends the majority of his time on P-Funk (about 50 pages), providing great insight and knowledge of the band’s many various incarnations, conceding that he’s only scratched the surface of the bizarre, tangled world of P-Funk. Let’s just say, you learn what you need to know.

While setting out to define Funk, Vincent often makes some marvelously well-thought out statements that really make sense. For example:

It takes musicians in complete command of their instruments, completely in touch with each other, hip and well-versed to musical traditions. Every instrument contributes to this sound. Rhythm instruments often pulse with percussive strength. The bass line, the guitar line, the horn lines in funk often deliver such complete melodic phrases that each could be the primary melody of simpler soul or R&B tune. (Soul and R&B grooves are generally composed of one primary melody, which is simply accented by the other instruments, not “countered,” as in funk.)

This sets up Vincent’s argument for disputing the myth of Funk being just disco, a vastly simplified form of funk usually created by producers rather than musicians. Indeed, chapter three’s “Myths about Funk” dispels this and four other prevailing myths about the Funk that are well worth reading by probably everyone who will, sadly, never come to this book in the first place because of the misconceptions.

Vincent also suggests several times why Funk would be rejected or ignored by the very audience it was made for. An example comes from this statement the writer makes about jazz, something that certainly rings true, still today:

While dance music was often considered “selling out” by chauvinistic jazz players, many black jazzmen interested in making money and exploring black consciousness through their music were drawn toward The Funk by the late 1960s. The gravitational force of the funk grooves spawned new forms of jazz-fusion music, a vast danceable jazz-funk movement, and has propagated into the 1990s as a coherent subculture of jazz chops, funk grooves, and Hip Hop raps.

Vincent lays out the history, defines the word (as best as is possible, I think) and provides the social, political and artistic contexts that brought about the rise – and the fall – of the Funk. He not only covers the majors in some depth (James Brown, Sly and the Family Stone) he covers pretty much all of the players from rock, soul and jazz who were part of the Funk.

I couldn’t come up with one single name that Vincent left out.

The politics of the book are clear as Vincent declares “Funk music is worth studying because it has a place in popular culture as one more in a long line of black musical styles – ragtime, swing, blues, and rock – that are often borrowed but not acknowledged.” But he never comes across as angry, holier-than-thou or racist in any way that some jazz writers have been known to be. As a result, the book never lapses into a personal treatise. Vincent’s too much of an entertaining writer for that.

Rickey Vincent’s Funk is a book that holds up almost flawlessly some fifteen years later and includes a discography at the end – with some of Vincent’s brief commentary (i.e., Funkadelic’s Maggot Brain, “the ultimate Funkadelic;” Ohio Players’ Skintight, “fantastic fusion of slick and nasty, standard and strange jams;” Chic’s C’Est Chic: “slick and tight. Too slick;” and, one of my favorites, Brick’s Good High: “catchy, creative, and quirky cuts support all time monster jam ‘Dazz’”).

He covers a heck of a lot of records here, some which may drive collectors crazy trying to obtain (though quite a few of these have since appeared on CD). But, they are all tied in some way to the chapters that precede the listing. This is remarkable in itself that all of this was assembled by one man. Only caught a few typos – but that’s editorial.

Rickey Vincent has provided a well-needed service to the music community and to a vital part of black history which would probably never know the seriousness of The One had it not been for Vincent’s magnificent endeavor.

An enjoyable read and an absolutely essential historical text.
Posted by Douglas Payne at 12:36 PM

Hello !.
You may , perhaps very interested to know how one can collect a huge starting capital .
There is no initial capital needed You may begin earning with as small sum of money as 20-100 dollars.

AimTrust is what you haven`t ever dreamt of such a chance to become rich
The company represents an offshore structure with advanced asset management technologies in production and delivery of pipes for oil and gas.

Its head office is in Panama with structures around the world.
Do you want to become an affluent person?
That`s your choice That`s what you wish in the long run!

I feel good, I started to get income with the help of this company,
and I invite you to do the same. It`s all about how to choose a proper partner who uses your savings in a right way - that`s the AimTrust!.
I earn US$2,000 per day, and my first investment was 500 dollars only!
It`s easy to start , just click this link http://lexenacad.1accesshost.com/kojyzo.html
and go! Let`s take our chance together to become rich

Find out how 1,000's of individuals like YOU are working for a LIVING from home and are fulfilling their dreams right NOW.
SUBSCRIBE NOW

Start following our signals right now and gain up to 270% daily.