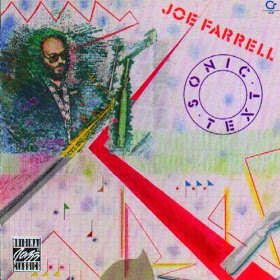 This superb album finds multi-talented reedman Joe Farrell (1937-86) paired with trumpeter Freddie Hubbard (1938-2008) and an outstanding rhythm section featuring George Cables on piano, Tony Dumas on bass and Peter Erskine on drums. The mostly straight-ahead set was recorded in 1979 and ranks among Farrell’s very best and probably best-known work – probably because it’s one of the few of Farrell’s albums that made the transition to CD and stayed in print long enough to get noticed.

Farrell spent much of the 1960s as a “section” man, working in the bands of Maynard Ferguson, Charles Mingus, Slide Hampton and the Thad Jones/Mel Lewis Jazz Orchestra, elevating to feature spots later in the decade with Jaki Byard, Chick Corea, Elvin Jones, James Moody and Andrew Hill.

After sessions on CTI with George Benson (Tell It Like It Is) and Antonio Carlos Jobim (Tide, Stone Flower), producer Creed Taylor gave Farrell his first solo recording opportunity, Joe Farrell Quartet (later reissued as Song of the Wind), a remarkable album that featured the reed man with pianist Chick Corea, guitarist John McLaughlin, bassist Dave Holland and drummer Jack DeJohnette, all of whom were part of Miles Davis’ band at the time.

Farrell recorded six more albums for CTI through 1976, all featuring outstanding groups and some of his best music, followed by two somewhat commercial albums for Warner Bros. (recently reissued on CD by the Wounded Bird label) and two more straight-ahead ventures on the small Xanadu label in 1979.

Sonic Text, originally issued on the Contemporary label in 1980, is a beautifully programmed set of mostly modal originals, highlighted by Freddie Hubbard’s “The Jazz Crunch,” a typical Hubbard-like jam tune that combines the best of Hubbard’s own “Happiness is Now” with “Straight Life,” and George Cables’ excellent signature piece “Sweet Rita Suite (Part 1): Her Spirit.”

Farrell is on tenor sax for the exhilarating post-bop of the title cut, the lovely “When You’re Awake” (with Hubbard on flugelhorn), the exciting “The Jazz Crunch” and the engagingly exploratory “Malibu” (at nearly 12 minutes in length, it is the album’s centerpiece) and soprano sax on the sprightly mid-tempo “If I Knew Where You’re At” (with Cables on electric piano and Dumas on electric bass). Farrell’s always invigorating flute work is heard only on Cables’ “Sweet Rita,” in which Farrell casts a net that suggests some of the work he was doing with Chick Corea at the time.

The musicians here work particularly well together. Farrell is in especially fine fettle, leading a cast of heavyweights with democratic authority and a unifying team spirit that gives this studio grouping the feeling of a solid working unit.

Another element of the group’s success is the dynamic Hubbard, who was coming off a period of fusion playing to prove he still had the jazz chops to make a session like this sound interesting. Freddie Hubbard, who like Farrell had also relocated to California by the late 1970s, is a significant part of the album’s success. Hubbard was part of the CTI stable at the same time Farrell was and the two toured together as part of the CTI All Stars (CTI Summer Jazz at the Hollywood Bowl, for example). Hubbard and Farrell are also heard on Don Sebesky’s 1973 CTI album Giant Box, but not together and Farrell was in the studio orchestra that backed Hubbard on the trumpeter’s The Love Connection, recorded earlier in the year that Sonic Text was made.

Cables, of course, can do no wrong, whether as a leader or, as he is here, a sideman. He is pitch perfect throughout Sonic Text. Like Herbie Hancock, Cedar Walton or John Hicks, he is a sideman who thinks like a leader, guiding with the perfect combination of rhythm and melody, and contributing just enough to frame a soloist in the most individual of ways. Farrell had already played with George Cables on two tracks from the pianist’s album Circle (Contemporary), recorded nine months earlier, and the two would later reunite for two 1982 recordings on the RealTime label, Darn That Dream (which was issued on CD) and Someday (parts of which were included on the Drive Archive CD titled Darn That Dream, which only included parts of the original album with that title).

Like nearly all of the CTI albums Joe Farrell made prior to Sonic Text, one yearns to hear more of this group doing more music together. Sadly, that was not to be (Farrell died of bone cancer on January 10, 1986, at the age of 48). The rhythm section (Cables, Dumas and Erskine) – minus Farrell – would reunite with Hubbard (and Bobby Hutcherson and Ernie Watts) three weeks later for the pianist’s terrific Cables’ Vision (Contemporary). But no more was heard from this ideal grouping other than the six scintillating and timeless tracks which appear on Sonic Text.
Posted by Douglas Payne at 1:07 PM

Anonymous said...
This comment has been removed by a blog administrator.
6:00 AM

I saw a program on Ebay for a Japanese tour with the Sonic Text band as Freddie Hubbard all Stars. Any idea if a recording or bootleg exists??

Have been looking for a live set from this band for a long time. Don't think it exists