Jimmy Smith “Sit On It!” 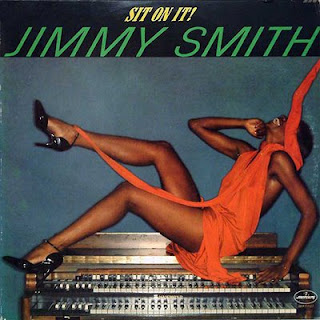 After releasing two little-known albums on his own Mojo label, organist Jimmy Smith resurfaced in 1977 on the mighty Mercury record label. At the time the label had most of its success in rock (Bachman Turner Overdrive, Thin Lizzy, Rush), funk (Ohio Players, Bohannon) and country (Tom T. Hall, Statler Bros., Johnny Rodriguez).

But jazz, such as it was at the time, made a very brief comeback on the label during 1976-78 with the additions of guitarist Gabor Szabo, drummer/bandleader Chico Hamilton, reed man Bennie Maupin, organ/keyboardist Charles Earland and Hammond B-3 legend Jimmy Smith.

Signing to Mercury put Jimmy Smith back in the majors and the organist produced three albums for the label during 1977 and 1978, two of which were pretty much in the same groove he’d been plying ever since his heady Blue Note days some quarter of a century before.

The exception was the appropriately exceptional Sit On It!, Smith’s 1977 Mercury debut, a funky exercise in West Coast jazz fusion appropriate to its time. The album’s silly title, a popular phrase at the time meant to indicate an otherwise rude aphorism, could very possibly have been meant as Smith’s f-you to the industry and jazz listeners at the time.

But quite a bit of this album stands out in the crowd, even though it’s likely that few Jimmy Smith fans regard this record very highly, and most of it stands out among some of the best – and most memorable – work “the boss” of the Hammond B-3 organ produced during the seventies.

The production was overseen by Eugene McDaniels (b. 1935), an R&B singer/songwriter who had a pop career in the early sixties (“Tower of Strength,” “A Hundred Pounds of Clay”), emerged in the late 60s with the powerful anthem “Compared To What” (performed with Les McCann and Eddie Harris), starred as a singer in several films (1962’s It’s Trad, Dad, 1974’s Uptown Saturday Night), did studio work as a vocalist (Bobby Hutcherson, Les McCann, Billy Harper) and, most importantly, wrote, arranged and produced for a number of successful soul acts during the seventies including The Supremes, Esther Phillips (“Disposable Society” from the 1974 Kudu album Performance), Gladys Knight and the Pips, Phyllis Hyman, Merry Clayton and, most notably, Robert Flack (“Feel Like Makin’ Love” – which got popular CTI covers by Bob James and Hubert Laws).

Although McDaniel’s jazz credibility was certainly in evidence, he’d never really overseen any other jazz recordings – before or since! – and Sit On It! probably qualifies as one of Jimmy Smith’s least jazz-like records. Chances are, McDaniels wasn’t chosen for his jazz credibility and, more significantly, it was obvious that Mercury didn’t care to produce the sort of Jimmy Smith “jazz” date that Blue Note or even Verve had issued years before.

McDaniels is aided substantially here by newcomer Alan Silvestri (b. 1950), who co-wrote and arranged all of Sit On It! years before he became the well-known and respected composer for such films as Romancing The Stone, Back To The Future, Predator, Father of the Bride, The Bodyguard, Forrest Gump, Night At The Museum, Beowulf and, recently, G.I. Joe. It is Silvestri who is probably most responsible for the album’s melodic appeal and funky backbone. At the time, he’d also been doing some of the same kind of funky work heard on the TV show CHiPs. And there is little doubt that it was Silvestri who knew enough to let “The Boss” do his thing.

Smith sings/belches out some nearly personified witticisms on the funky “Give Up The Booty” (also featured on the great 1995 Verve CD compilation Move To Groove – The Best of 1970s Jazz-Funk). But the real magic here is what Smith concocts on the synthesizer. Like Sun Ra, he’s a wondrous child discovering all the delights that can be delved into on an unknown musical landscape.

“Can’t Hide Love” brings in the era’s ubiquitous disco beat – and the unfortunate background vocalists (which are easy to tune out). But Smith returns to organ here and it’s a pleasure to hear what he can do with the day’s groove. He really is the master of the Hammond B-3. Like some of his late sixties Verve dates that mix his organomics with his (ahhhh) blues-styled vocalisms, it is best to leave “Cherrystones” to people, unlike me, who enjoy these sorts of things.

Side two is where the action is. “My Place In Space” and “Slippery Hips” are both funky disco pieces that benefit especially well by Herbie Hancock’s (nearly imperceptible) electric piano comping and Abraham Laboriel’s signature bass time keeping.

On both pieces, Jimmy Smith concocts one intoxicating line after another. Both make Sit On It!, which will probably never see the light of day on CD, worth every penny. “Born To Groove/From You To Me To You” comes close too, except that it alternates a great funk vibe, for which Smith responds quite well, with an unnecessarily silly vocal refrain handled by one “Afreeka Trees” (Janice Mitchell, who like Mr. McDaniels, was also seen and heard in Uptown Saturday Night). It still makes for worthwhile listening.

It’s nice to know jazz greats like trombonist George Bohannon, tenor saxist Ernie Watts and former Blue Note all-star Fred Jackson (on alto sax) can be heard on “Give Up The Booty.” But they really don’t make any sort of impact here. This is back in the day when all the supporting musicians gave it up for the sake of the soloist. It’s a shame – but at least everyone got paid.

There may not be much to propose Jimmy Smith’s Sit On It! as a great jazz album (McDaniels and Silvestri disappeared after this and Smith got to (briefly) produce his own music again). But there’s plenty to recommend here for those who want to hear the organist get down and get funky and get in his pleasurable Hammond B-3 bag.

You can download Sit On It! from Smooth's great My Jazz World blog.
Posted by Douglas Payne at 11:35 PM

Happened on this by chance browsing through the blog.
It was the funky feel that first suggested something good was goin' on.
Give it a few listens and the groove takes over.
Something really different that is worth delving into, unless you're a died-in-the-wool
jazz enthusiast.
Slippery Hips is a wonder with Smith and Laboriel in fine form. Booty too.
Great that JS pulled this different move off.As for Gene McDaniels in charge of production,
surprise surprise!
I sat on this all right!