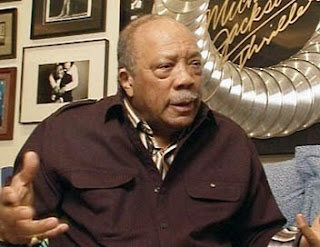 Peter Preuss, one of my good web friends and a contributor to my Lalo Schifrin discography, recently alerted me to a fascinating television documentary film focusing on the “golden age” of film composers and their music.

The documentary features interview segments with such "Golden Age" composers as Lalo Schifrin, Quincy Jones (pictured), John Barry, Michel Legrand and Peter Thomas. The participants discuss composing music for films in general and some of their more well-known themes in particular.

Peter says that the documentary focuses on the following Lalo Schifrin titles:

Given the brevity of the film and the number of composers covered, these specific clips must be extremely brief as the (translated) hopblog page indicates. But the large number of fans for this heretofore unheralded music will certainly appreciate the attention the filmmakers give to the genre’s composers and their memorable music.

While prevailing wisdom generally acknowledges the “golden age” of film music as the period directly before the filmmakers' consideration of the “golden age,” featuring such composers as Bernard Herrmann, Bronislau Kaper, Alfred Newman, Alex North, David Raksin, Miklos Rozsa and Franz Waxman, such attention devoted to the “silver age” where jazz played a great part of the melody and tempo of the music is indeed warranted and welcome, no matter what you call it.

Thanks to Peter Preuss for making me aware of this documentary. Let’s hope those of us in the United States who are huge fans of this music are able to see it some time soon.

The IMDb listing is here.
Posted by Douglas Payne at 11:35 AM