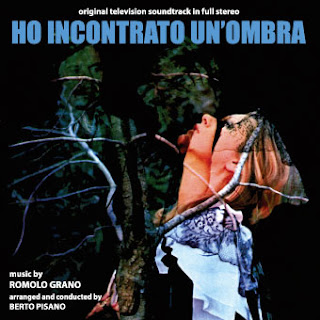 Digitmovies comes to the rescue of yet another fine and highly obscure Italian film score with this first-ever CD release of Ho Incontrato Un’Ombra, which translates as “I met a shadow” and is also known in English-speaking climes as A Blue Shadow. The 1974 RAI TV mini-series, directed by Daniele D'Anza and starring Giancarlo Zanetti, Beba Loncar, Laura Belli, Carlo Cattaneo and Renzo Rossi, is a romantic ghost story that had Italians “glued” to their television sets at the time.

Italian film music specialist, archivist and producer Claudio Fuiano credits the success of the drama to the film’s original soundtrack, which was written by Italian TV music composer Romolo Grano and beautifully arranged and conducted by Berto Pisano.

Pisano, himself a composer of some little renown for such internationally-known cult films as Kill (1970), La morte ha sorriso all’assassino (aka Death Smiled at Murder, 1973), Nude per l’assassino (aka Strip Nude for Your Killer, 1975), Malabimba (1979), Patrick Still Lives (1980) and Burial Ground (1981), sets a very nice mood here: romantic, yet haunting and lyrical, yet mysterious.

The surprisingly brief soundtrack to Ho Incontrato Un’Ombra, a mere 30 minutes, was issued as a promotional LP in Italy by the RCA-owned Pegaso label. So hardly anyone – even in Italy – has heard the entirety of this music, which was edited all sorts of different ways for the TV film, until now. 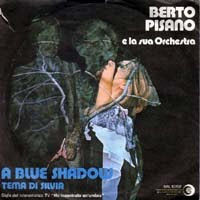 Pisano’s arrangement of the theme was issued as a 45-rpm record by the Italian Ricordi label, backed with “Tema di Silvia.” When “A Blue Shadow” turned into an Italian radio hit, a Berto Pisano album called A Blue Shadow was issued by Ricordi in 1974 featuring the two themes from the 45-rpm record and the film’s “Tema di Katerine” as well as several other Pisano performances and another Grano/Pisano TV movie theme, L’Edera. RCA even capitalized on the song’s hit potential by issuing their own 45 of the theme as performed by Romolo Grano’s own orchestra (this version is included on the CD). 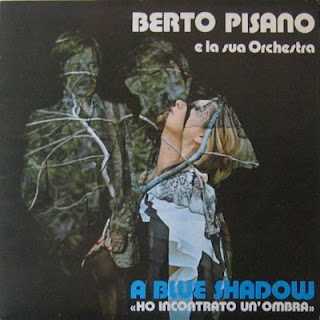 Oscar Valdambrini’s plaintive and mournful trumpet elevates and elucidates the film’s lovely main theme, which gets additional variations on the soundtrack for solo guitar and harpsichord – not as many variations as so many other Italian soundtracks get of a main theme. But Pisano, who got his start as a jazz bassist, provides an intoxicating jazz groove to the proceedings that carries the score’s best themes. These include "The Anderson Tapes”-like “Tema di Katerine,” the Groove Holmes-esque “Night Shadow” and the funky “Working in the City” (undeniably a template for Pisano’s Nude per l’assassino theme), all featuring the great Valdambrini and some of Pisano’s most clever and alluring touches.

Such filmic compositions as “Waiting for Four,” “Tema di Silvia,” “Casa Abbandonata” and “Third Fear” all have an appealing Wait Until Dark (Henry Mancini) quality to them, offering a sort of tense romanticism or romantic tension that suits the story just perfectly. Interestingly, Pisano uses a Moog synthesizer to good effect on both “Tema di Katerine” and “Third Fear” to properly suggest the ghostly intervention that drives the story. The legendary Edda Dell’Orso lends her ethereal voice briefly to the most dramatic parts of “A Blue Shadow,” “Tema di Katerine” and “Tema di Silvia,” making these three themes pretty much the highlights of the overall soundtrack.

Ho Incontrato Un’Ombra surely ranks among some of the best soundtrack music produced in Italy during the 1970s and Digitmovies has done a superb job restoring this score – from the surviving master tapes – for CD release.

It is also another reminder of just how good one of the lesser lights of Italian film music, Berto Pisano, could be. Sure, Pisano could be derivative in the extreme. But even if his influences were obvious, it didn’t make it any less exciting to hear how well he could expand upon a riff or even improve upon a familiar theme.

Producer Claudio Fuiano has already bravely championed Pisano’s music by supervising all of the Berto Pisano soundtracks that have been issued on CD, including La morte ha sorriso all’assassino (1973) and La svergognata (1974) for Digitmovies.

Here’s hoping that the excellent restoration of Ho Incontrato Un’Ombra will prompt even more of Pisano’s music to see the light of day on CD. My vote includes the mid-70s material issued on Ricordi (A Blue Shadow, Ideas and the fantastic 45 of “Flowers,” from the Italian TV film La Traccia Verde b/w “Grey Moustache”) and, of course, the never issued soundtrack to Nude per l’assassino.
Posted by Douglas Payne at 11:29 PM