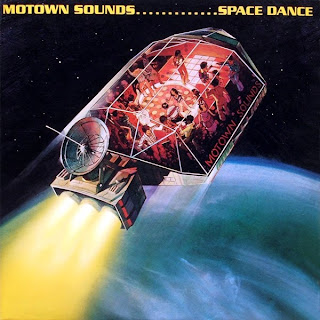 This 1978 album is one of the few cult disco “cash-in” albums the mighty Motown issued in the late 1970s. The revered Magic Disco Machine’s Disc-o-Tech (1975) is another and probably one of the first. Space Dance, the only album ever issued by the ridiculously named “Motown Sounds” is another.

By this time, Motown wasn’t the powerhouse it once was. Now overshadowed by any number of soulful acts from Philadelphia International’s “The Sound of Philadelphia” or the New York or Miami disco scenes, Motown was pretty superfluous by 1978. Though they were hardly without their hits (Marvin Gaye, The Commodores, Thelma Houston) and their recording acts all bowed in different ways to the overriding pressure of disco, Motown was no longer the force to be reckoned with as when the then-Detroit based label considered itself “Hitsville U.S.A.” all those years ago.

This particular studio aggregate was assembled for a rather effective dance-worthy collection, written, arranged and produced by Michael L. Smith, who wrote songs like “Little Girl” for The Isley Brothers and worked with Isaac Hayes before starting a group with his brothers called The Smith Connection in 1973. The prodigiously talented, baby-faced Michael Smith eventually started doing session work for Motown Records, gaining a hit for The Jackson 5 (“All I Do Is Think of You”) and working on former J5 member Jermaine Jackson’s somewhat successful 1976 debut solo album. This led to more studio work including albums for Thelma Houston, Switch and projects like this one. In 1981, Michael L. Smith formed the group Lovesmith, which recorded for Motown Records, and he ended up launching a solo career as “Michael Lovesmith,” where he recorded three albums for Motown between 1983 and 1985. He would go on to write hits for Barry White, Aretha Franklin, Gladys Knight and Bobby Brown as well as providing backgrounds for artists as diverse as John Denver and Luther Vandross.

The musicians alone are enough to invite an appetite for Space Dance. But the music is worth it too. This is evident in the album’s very best track, the ultrabad, supercool “Bad Mouthin’” – a fine piece of disco funk magic and one badass sample quite a few producers have copped. Wechter provides the hypnotically rhythmic vibe while Smith highlights with a magisterial string and horn arrangement. The horns nearly suggest “TSOP” but the strings individualize this six-minute extravaganza into an altogether different realm. This instrumental is surely one of disco’s finest moments.

The album opener, “Groove Time,” comes in a distant second as a good little groover that lives up to its self-promoting name. The background vocalists chart the meaty Heatwave-meets-TSOP bootie shaker acceptably while Smith’s orchestral work, suggesting a cross between the Love Unlimited Orchestra and Salsoul Orchestra, is simply magnificent to investigate, behold and get down to. The solos here are clearly the work of the great but too briefly heard Lee Ritenour on guitar (worth the price of admission), Julius Wechter on vibes and Bill Green, who takes a scintillating solo on sax.

“Space Dance” is the kind of novelty clearly meant to compete with Meco’s “Star Wars” hit, with lyrics highlighting the era’s space-related double entendres. It’s worth noting that the string and horn arrangement on this song – its best asset – is courtesy of William Goldstein, the musical brains behind Motown’s Magic Disco Machine and composer of many TV and film scores including Wes Craven’s Shocker (which explains why “Space Dance” sometimes suggests a better-than-average TV theme of the period).

Bill Green gets his own feature on the middling yet melodic “Easy To Love” that boasts a nice break worth hearing – and makes a case for Green to be heard in a wider context as a significant improviser. Things get a bit too generic on “You Don’t Like To Party (Like I Do),” where Smith crafts something like Studio 54 background music with another Wechter solo. And “Rich Love, Poor Love” is a decent enough near-instrumental disco suggesting any number of Curtis Mayfield hit points (namely “Move On Up”) and providing enough musical talent plying the right beats per minute.

While its not available on CD, Space Dance is the sort of record that is best appreciated on vinyl. Pick the needle up and drop it on your favorite groove. Scratch the parts that should be repeated. Pick it up and start the dance again. Find the vinyl. This one’s a winner.
Posted by Douglas Payne at 11:38 PM

professor Eddy said...
This comment has been removed by the author.
2:14 PM

To be honest, this album sounds very much like Motown trying to jump on the disco bandwagon. A bad attempt to copy the Philly sound. But I like this post, it contains a lot of interesting information! And I totally agree: Motwon fell artistically apart in the seventies, but the Gordy company was (commercially) very succesful in the (early) eighties with Rick James, Lionel Richie and Diana Ross. But the magic had totally disappeared. They weren't leading anymore in any way.