The Doctor Exx Band “Superman And Other Disco Hits” 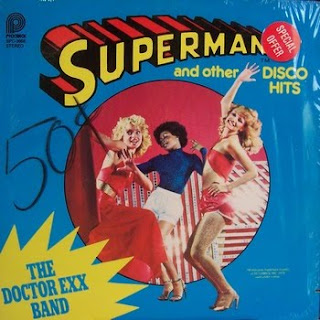 Sometimes the funniest things surprise you. Take this album for instance. Issued in 1979 at the height of discoploitation on the ultra low-budget Pickwick label with some of the worst, cheesiest cover art imaginable, this one was a sure bet to find its way into many garbage bins – before anybody ever heard it. I dug my copy out of the sadly neglected disco section of a used record store recently – and it was indeed quite a find.

I’m almost embarrassed to say that anything with a title like Superman And Other Disco Hits is a good record. But it is.

Nothing whatsoever is known about the unreal Doctor Exx Band other than the fact that the ridiculously-named aggregate probably consisted of various studio musicians contracted (for probably very little money) to perform some disco hits of the day. Pickwick was famous for that sort of thing. Probably none of the studio musicians who made this recording even know they’re on the record!

The only musical credit on the album comes from the record’s back side, indicating that it was “Recorded under direction of D.L. Miller.” One of the record industry’s most notorious “behind the curtain” men, Miller (1923-85) – also known as David Miller , Dick Miller and Leo Muller – was the man who practically invented bargain-basement records, often imitating or exploiting far more successful fare, and foisted millions of mostly pointless 101 Strings records on the world. An illuminating bit on D.L. Miller can be read at the always reliable Space Age Pop Music resource.

Given the engineers on board – Dave Hunt (The Flying Lizards, Michael Nyman, Diamanda Galas, Gavin Bryars) and Kenny Denton (Anthony Newley, The Strawbs) – it’s a fair bet the album was recorded in London, where musicians weren’t locked into unions as they are in the U.S. (which means any work is good work for a struggling musician), between late 1978 and 1979.

Taking as its theme the then-recent batch of hit-making themes written by John Williams for screen “blockbusters” (John Williams was attached to just about every one of the screen’s first blockbuster films), highlighted by the new and slightly derivative “Superman” theme - which was issued on both 45-rpm and 12-inch singles - and the inevitably Meco-esque “Star Wars” and the exceedingly well-handled “Close Encounters,” this album’s real interest and great fun lies in everything else.

The album’s centerpiece is probably the funked out arrangement of “2001” (they didn’t even bother with the tongue twisting title of the Richard Strauss original, “Also Sprach Zarathustra”). The funky bassist sets the tone and delves into the funk straight from the get go. It’s pretty basic disco funk 101. But it’s wonderful nonetheless. An unknown Fender Rhodes delivers the lead line and a top-flight solo while a guitarist is drafted into to replicate the wha-wha solo John Tropea delivered on Deodato’s 1973 original hit version of the now pop classic.

The so-called “Mountain Funk” is nothing less than a disco-fied version of Edvard Grieg’s “In the Hall of the Mountain King” from the Peer Gynt suite. The lead is taken by a Moog player, highlighted by a terrific rhythm, some nice strings and particularly imaginative keyboard work. The guitarist and the drummer on this track are particularly intoxicating. The stupidly titled “Lois Gets On Down,” a reference back to Superman, actually recycles another Peer Gynt piece, “Anitra’s Dance.” Again, the rhythm, with nicely appointed string and horn charts, is just terrific. And there’s another great sax solo here.

The hyperkinetic “Panic on Planet ‘K’” – which again boasts some clever string and horn arrangements as well as a nice synthesizer solo – and the very familiar sounding “Metropolitan Heat” (probably another classical or movie theme adaptation) get equally nice workouts on this all-instrumental set (no useless background vocals either!), while “Metropolitan Heat” in particular has a number of musical performances that are worth noting, notably the Don Menza-like sax solo. It’s a shame none of the great musical contributors are noted here.

The surprise here is that any Pickwick album is worth hearing. But this one is a real treat. Superman And Other Disco Hits is a surprisingly satisfying find if you like good instrumental disco music and you can find this particularly obscure album anywhere.
Posted by Douglas Payne at 12:12 AM

Do you have mp3s or a download link? Thanks.

I can't believe you have this album. My friend had it and we used to make up horrible dances to it all the time. It was a real classic.

"Metropolitan Heat" is "The Great Gate at Kiev" from Moussorgsky's "Pictures at an Exhibition".

Follow our signals NOW and gain up to 270% per day.