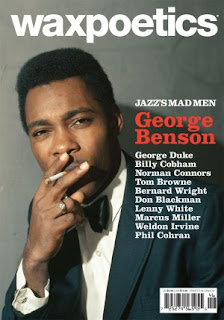 The great Wax Poetics has come out with one of its best ever issues with its marvelous 46th.

This issue’s theme is “Jazz’s Mad Men” – presumably tied to guys who came out of the ‘60s when TV’s Mad Men takes place – and has any number of features of interest that nearly all of today’s jazz press avoids completely including features or interviews with the cover’s Georges (Benson and Duke) as well as Billy Cobham, Norman Connors, Tom Browne, Bernard Wright, Don Blackman, Lenny White, Marcus Miller, Weldon Irvine and Phil Cohran. There are even more great articles inside, as there always are with this magazine, on Mainstream Records, Nostalgia 77, Korean funk (with the staggering DJ Soulscape) and remixed Verve for gamers too.

Aside from an unusually increased number of typos and inaccuracies (Creed Taylor signed John Coltrane to Impulse, not Verve as suggested in Seth Cosimini’s fab article “The Big Heat”) and a lack of credit for some of guitarist Andrew Scott’s facts included in the otherwise tremendous profile of guitarist George Benson, this is a superbly informative and thoroughly entertaining issue that opens with editor in chief Andre Torres’ always beautifully-worded foreword.

I would like to quote a part of Andre’s profound introduction here, as it mirrors what a lot of music lovers like myself have thought for some time. Here, he discusses that “renegade period of hip hop” of yore he favors so much turning into something else completely where “many older heads lament the rise of the ‘shiny-suit era’ and accuse Puff of killing ‘real’ hip-hop,” suggesting that folks didn’t want the music to become jazz.

Well, Torres explains that jazz is “(a) great music that once captivated a generation of listeners in their youth, only to become an antiquated form of art music taught in universities, sanctioned by and made for an elite group – a music that lost touch with the people.”

Torres continues, “In his interview for this issue, Phil Cohran pinpoints just that moment when it happened. What was recreational dance music for even the entire family to enjoy became a spectacle when cats like Bird, Miles, and Dizzy were onstage soloing for fifteen minutes. Which is great – these cats were geniuses – but not everyone can get down like that. But they’ve set a standard that generations of jazz musicians have been forced to live up to, boring countless listeners to death in the process. Yet whenever jazz musicians try to bring the groove back, the institution tells them that it’s not real jazz. And so the music stays stuck in an artistic limbo, plying for the attention of those in the ivory tower who tell them what they can and can’t do.”

Any number of Twitter rants or blog articles could be written in response to this accusation. But Torres’ point is justified. Sadly, too little of jazz merit has been waxed in the last three decades or so. Anyone willing to contest that can only point out personal favorites, almost nothing for the masses or for the ages.

This issue of Wax Poetics tries to show some of those who tried to make a difference in jazz – for better or for worse – no matter what one or two avatars of influence (or fans) think.
Posted by Douglas Payne at 11:07 PM

This is an issue where almost EVERY record mentioned is part of my collection, allowing me a deeper insight into what the articles were talking about. For those seeking the good stuff, this issue is a godsend, for those in the know, a mighty fine read :-)