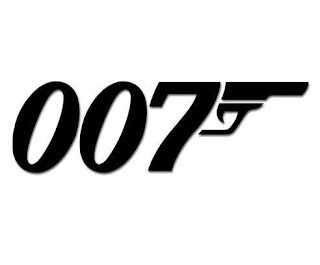 I spend a lot of time watching and listening to James Bond, always returning to certain favorites. Despite a series overflowing with interesting music – some of the best of its kind - these are a few of the songs that have always rocked my world.

I have neither a special favorite among all these I’ve identified here, a sort of top ten, if you will, nor did I include everything worth noting. First of all, I don’t have every Bond soundtrack. These are just a few of the titles which I like to hear over and over again, though I confess I generally avoid the film’s main themes as I tend to dislike songs with vocals and the pop-oriented pretensions these songs are usually forced to take on.

That said, a few of the main themes not among those on this list are worthy of making me sit through the often tedious but cool-looking main-titles sequences. These include Nancy Sinatra’s “You Only Live Twice,” Lulu’s “The Man With The Golden Gun,” Duran Duran’s “A View To A Kill” (mostly because it’s my favorite Maurice Binder opening), Tina Turner’s “Goldeneye” and Garbage’s exceptionally good “The World Is Not Enough.”

Just about all of the composers who have contributed scores to the Bond film franchise (the official Bond film franchise that is) have done a good, if not great, job adding to the legacy. The late, great John Barry established a certain tradition for others to uphold and a pinnacle to achieve. But George Martin, Marvin Hamlisch, Bill Conti, Eric Serra and, most notably, David Arnold have given some great music to the series. 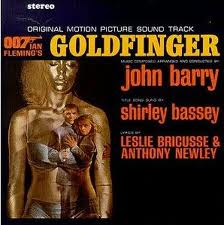 Goldfinger - John Barry (1964): Perhaps the James Bond soundtrack, this one includes one of my very favorite Bond themes, the brilliant and all-too brief Kenton-like “Into Miami.” Aside from the exceedingly memorable main theme, Barry contributes any number of imaginative, inventive and exciting cues to this score including “Alpine Drive” (which Barry revived later as the instrumental version of the “Goldfinger” theme), “Auric’s Factory” and “Bond Back In Action” from the original soundtrack LP and “Golden Girl” and “The Laser Beam” from the 2003 expanded CD release.

The only thing missing here that I would have liked to have heard more of (aside from an extended take of “Into Miami”) is the Mexican cantina band’s performance at the El Scorpio Café at the very beginning of the film, where Bond says “at least they won’t be using heroin-flavored bananas to finance revolutions.” Barry’s devilishly delicious soundtrack to Goldfinger was one of the most interesting and innovative scores of its day, nearly single-handedly ushering in the Silver Age of film scoring and raising the bar for every James Bond score that followed. 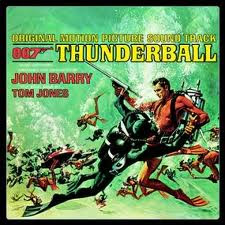 Thunderball - John Barry (1965): Thunderball may very well be the most elegant and eloquent of all the James Bond scores before or since. Energized from his success with Goldfinger, John Barry gave this score his thunder-all.

Thunderball evinces John Barry’s evolving compositional signature, his natural ability for crafting dramatically compelling long-form statements and, most notably, an individualistic orchestral palette that not only underscores effectively, but perfectly punctuates the action on the screen in ways that few other film composers have ever successfully managed.

Almost everything here is magnificent, and presented in typical suite form: “The Spa,” “Switching the Body,” “The Bomb,” “Café Martinique” (the first half of which is a slow-dance variation of “Mr. Kiss Kiss Bang Bang”), the gorgeously-scored instrumental “Thunderball,” “Death of Fiona” (another “Mr. Kiss Kiss Bang Bang” variation, aided ably by King Errisson’s over-the-top percussion) and “Mr. Kiss Kiss Bang Bang” (the film’s original title and first main theme). From the extended 2003 CD: “Bond Meets Domino/Shark Tank/Lights Out For Paula/For King and Country.” 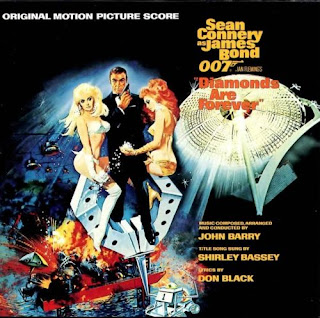 Diamonds Are Forever - John Barry (1971): The score that ended John Barry’s run as the singular composer for the James Bond franchise and, probably his last great Bond score in the whole series. Barry’s terrific main theme, which he clearly favored himself and had voiced again by Goldsinger Shirley Bassey (who would later sing his Moonraker theme), is a highlight. 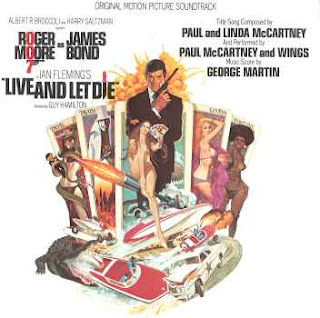 Live And Let Die - George Martin (1973): My very first James Bond film. At 10, I was freaked out by the multiple reptiles throughout, American highways filled with nothing but 1973 Chevy Bel Air/Impala/Caprices (all cars with the exact same body style!) and Cadillac pimpmobiles, and the creepy-assed coffins (one that sucked you up and one filled with snakes). But the film has a number of great – near comic – performances and utterly memorable lines (“Names is for tombstones, baby!”) that make it a winner in my book. And there’s some great music too.

The music ranks up there among my very favorite Bond scores, a stylish one that’s not quite the Blaxploitation thing they were aiming for – if that’s the case, why hire George Martin? – and surely funkier than the lovely lounge-core outing that Diamonds Are Forever proved to be. George Martin, better known as producer of The Beatles (who Connery said required earmuffs in Goldfinger) and the first non-John Barry composer to score a Bond film, scored a real winner here.

The highlights: one of the series’ best-ever themes, by Paul McCartney and Wings, “Whisper Who Dares,” “San Monique,” “Fillet of Soul – New Orleans/Live And Let Die (sung by B.J. Arnau)/Fillet of Soul – Harlem,” “Bond Drops In” and “Trespassers Will Be Eaten.” Martin also provides an appropriately provocative “Soul Makossa” take on the “James Bond Theme” theme too.

My favorite theme from the film, though, never made it on the original film soundtrack album. The cue plays when Bond follows a lead to the voodoo shop in Harlem. On the expanded CD of the soundtrack, issued in 2003, the song appears as the third of four cues in the suite titled “Bond To New York” (starting at 1:18 – heard in a brief reprise, starting about a minute into the suite called “New Orleans”). The 2003 CD includes a number of excellent cues from the soundtrack left off the original LP, making it absolutely worth acquiring. 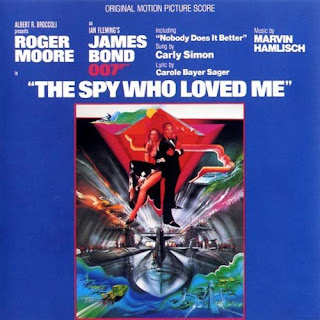 The Spy Who Loved Me - Marvin Hamlisch (1977): “Bond 77,” an excellent disco-fied arrangement of the James Bond theme, “Ride to Atlantis,” the exotic jazz of “Mojave Club” and the Deodato-like “Eastern Lights,” with a great guitar solo that I would have guessed was the work of John Tropea (as the score was recorded in London, it’s probably someone else). 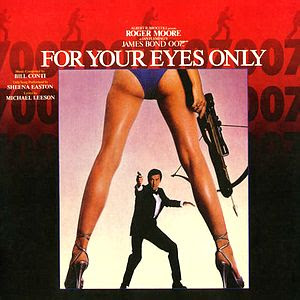 For Your Eyes Only - Bill Conti (1981): Unquestionably my favorite Bond film and undoubtedly my favorite Bond score. For reasons best left unsaid, I ended up seeing this film eight times in the theatre back in the day. The whole experience gave me great comfort at a very lonely time in my life. I still recall that time when I watch this film again and again. But I always enjoy returning to For Your Eyes Only and it is one of my greatest guilty pleasures of all time.

Nearly every track on this soundtrack ranks among my favorites in the Bond Series (Conti’s The Thomas Crown Affair is another favorite) and always takes me pleasantly back to the film, no matter how incorrectly most critics of this score claim the whole thing is disco. It isn’t. The hit theme is quite good too.

My favorites: “A Drive in the Country,” “Take Me Home” (with a beautiful flugelhorn solo by Eddie Blair), “Melina’s Revenge,” “Gonzales Takes A Drive” (both parts, oddly titled, covering Bond’s approach to Gonzales’ villa and his departure/escape), “St. Cyril’s Monastery,” the great chase theme “Runaway,” the instrumental version of “For Your Eyes Only”(featuring a gorgeous flugelhorn solo by Derek Watkins) and “Cortina.”

In 2000, Ryko issued a CD of the soundtrack with seven bonus tracks not previously issued on the LP including the great “Ski…Shoot…Jump.” In 2003, the exact same version of the soundtrack was issued again, along with most of the other Bond soundtracks. 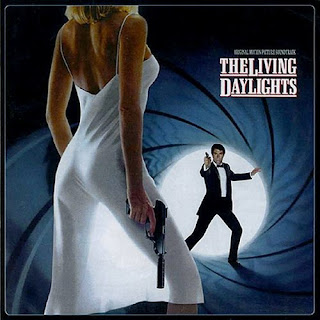 The Living Daylights - John Barry (1987): This is probably one of my least favorite Bond films. The other Timothy Dalton Bond is worse, though. But it showed John Barry, in the very last of his 12 Bond scores, showing an oddly renewed interest in Bond 4.0, with some of his most contemporary effects (in any of his scores) and his stately melodic craft blooming for this newly-recharged series in the full regalia of many years before.

Highlights are few but include “Ice Chase” (a sort of techno update of the Bond theme) and “Hercules Takes Off” (an interesting instrumental version of a-ha’s main theme). Unlike others, I can do without then-trend setters a-ha and the especially regrettable Chrissie Hynde (The Pretenders), who’s mugging here on two songs far beyond acceptability; both reasons that make this whole thing nearly unlistenable.

Curious that the film includes a number of classical pieces (always a bad sign, like A View To A Kill) – and Barry himself at the helm of one such performance, as he was for Deadfall (1968) – but the soundtrack includes none of these, all of which, sadly, far out rank anything in passion or significance on the soundtrack recording. 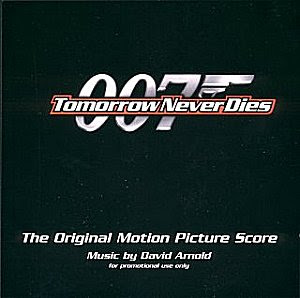 Tomorrow Never Dies - David Arnold (1997): “Hamburg Break In,” “Hamburg Break Out,” “Back Seat Driver” (much of the best of which isn’t even included in the film) and “the Party,” a down-tempo electronica lounge tune that accompanies Bond as he enters the Carver Media Group building in Hamburg for its global satellite launch party (a tune that doesn’t appear on my copy of the soundtrack - the second version issued, pictured above - for some reason). 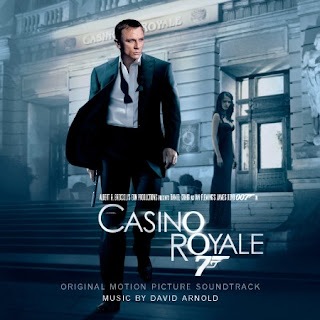 Casino Royale - David Arnold (2006): Probably David Arnold’s best and most original and fully-developed score for the entire James Bond series thus far, Casino Royale includes the terrifically energized and exciting “African Rundown” (notably the brief part, about five minutes in, where the chase leads Bond to the embassy, scored by Arnold with some particularly nice acoustic bass accoutrements) and any number of terrific themes that do much to propel the film (one of the best in the entire series) along, including "Blunt Instrument," “Solange” and the lengthy “Miami International.”

Oddly, the Casino Royale soundtrack represents one of the most complete Bond soundtracks ever released and it doesn’t even include Chris Cornell’s hit theme song, “You Know My Name,” which ranks among one of the best of the Bond themes – as does the opening-credits sequence, fortunately lacking in sexy girls (which got the titles designer fired from future Bond assignments!). 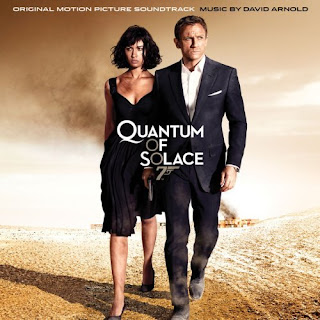 Quantum of Solace - David Arnold (2008): Like the film, this score improves the more you take it in. Highlights: “The Inside Man,” “Bond in Haiti,” “Somebody Wants to Kill You” and “Night at the Opera.” Arnold also appropriately revisits some of his Casino Royale themes in the brief “Talamone,” “What’s Keeping You Awake” and “Forgive Yourself” (all scenes with Giancarlo Giannini’s Mathis, who also appeared in the earlier film). The stupid main theme by Jack White and Alicia Keys has absolutely nothing whatsoever to do with the film or the rest of the score. Makes you wonder why. Then again…

Posted by Douglas Payne at 9:38 PM