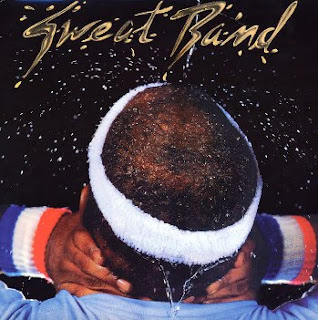 Recently reissued on CD for the first time since 1994 by reissue greats Get On Down, this little-known and barely-remembered album is a 1980 Bootsy Collins/P-Funk joint that deserves far better than it ever got.

Despite Collins’ cartoon-y antics and somewhat goofy lyrics, the Rubber Band was often more “musical” than the rest of P-Funk, probably due to the high musicianship Collins himself brought to the endeavor. Very little that could be considered jazz or jazzy came out of it all but the music was tight and much more disciplined than the other P-Funk units, something Mr. Collins no doubt gleaned from his time with James Brown.

The Horny Horns were featured heavily throughout, with Fred Wesley covering the charts and sidekick/emcee Maceo Parker getting a high dose of solo spots. The best stuff out of the Rubber Band showed how well it all worked. Sample “Stretchin’ Out,” “Psychoticbumpschool” and “Another Point of View” from Stretchin’ Out In Bootsy’s Rubber Band; “Ahh…The Name Is Bootsy Baby,” “The Pinocchio Theory,” and “Rubber Duckie” from Ahh…The Name Is Bootsy Baby; “What’s The Name Of This Town,” “Bootzilla” and “Roto-Rooter” from Bootsy? Player of The Year; and “Bootsy Get Live” and “Jam Fan” from This Boot Is Made For Fonk-n.

By 1980, Bootsy spread his wings a bit and launched the Sweat Band, a more instrumental version of the Rubber Band, on George Clinton’s newly-devised CBS subsidiary, Uncle Jam Records. The album opens with the bracing electro-instrumental, “Hyper Space,” nearly disclaiming any similarity to anything in the P-Funk cannon and nothing at all like the Rubber Band. Driven by synth-man and co-writer Joel “Razor Sharp” Johnson and peppered nicely by guitarist Mike Hampton, it almost suggests a European action film theme of the time – a great dance piece, which could work well to highlight action on the silver screen – or just as effectively on the mirror-balled dance floor. This is the kind of thing everyone was hoping Prince would come up with at the time, prefiguring his Madhouse records by more than a few years.

Next follows the dance hit “Freak To Freak,” a good groove that suggests what the next phase of Bootsy’s Rubber Band could have been but never was - groovy guitar, funky bass, electric drums and programmed handclaps. “Freak To Freak”also appears on 6 Degrees of P-Funk: The Best of George Clinton and his Funky Family, a CD compilation of Clinton’s Columbia projects made during the 1980s.

“Love Munch” is a poppy piece of jazz fusion that sits easily alongside anything Spyro Gyra was doing at the time, were it not for Maceo Parker’s gripping and hiccupping sax taking it somewhere stratospheric that’s well worth following. With Bootsy’s aggressive “Space Bass” and all-over-the-map percussion, “Jamaica” is the closest Bootsy and Maceo ever came to successfully melding the J.B’s sound with the P-Funk groove.

The chant “Jamaica – take me to your jungle” paves the way for Bootsy’s Rubber Band’s next stop, a decade later, on the funky career overview, “Jungle Bass” (4th & B’way, 1990). “Body Shop” and “We Do It All Day Long” (heard in brief on what was originally the LP’s first side – now track 4 – as an oddly placed “reprise” before the full version is heard at the end of the LP’s side two, now track 7 on the CD) sound like above average P-Funk grooves left off of other P-Funk albums because they are straight party tunes and not sci-fi concepts or some off-the-wall comical piece. Both are Bootsy conceptions co-written with P-Funk guitarist and vocalist Gary Shider, with the Brides of Funkenstein and Parlet chanting throughout in a typical David Bowie-meets-Fred Flinstone sort of wackiness. Bootsy’s Space Bass drives both pieces along with enormous propulsion, highlighted by some tasty keyboard work that is, sadly, not by Bernie Worrell, who is listed as a contributor here.

Sweat Band ranks high among P-Funk’s 1980 output, which also included Parliament’s regrettable Trombipulation and Bootsy’s inconsequential Ultra Wave, easily making this one of the essential P-Funk albums to own, despite the presence of one of the worst and least P-Funk looking album covers in the entire P-Funk discography (other than the 1983 P-Funk All Stars album Urban Dancefloor Guerrillas).

I get the sweatbands. But, really. The music deserved better than freaky sweatbands - which are more dated than the music. Regardless, the album's rather surprising lack of success ensured that no follow-up has yet been waxed.
Posted by Douglas Payne at 10:00 PM

VASTLY, HIGHLY UNDERRATED Albumn. Who Gives a DAMN About An Album Cover ? And Trompbipulation Was A Good Albumn. Gwr Someone Who Likes FUNK To Review FUNK.