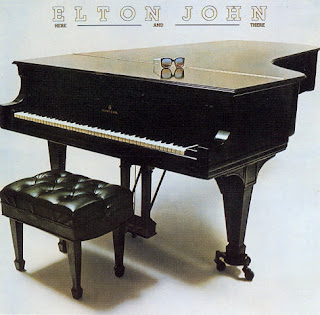 Bet you’d never guess that the first musician I ever obsessed over – really obsessed over - was Elton John. My earliest memories of Elton include “Crocodile Rock,” “Tiny Dancer,” “Goodbye Yellow Brick Road” and “Saturday Night’s Alright for Fighting,” all of which were blasted endlessly over the AM radio channel I listened to back in the day (13-Q, for the record, which I think is now an oldies/easy-listening station still operating in Pittsburgh, Pennsylvania).

My first Elton John album was 1974’s Caribou - a gift from Santa - with “The Bitch is Back” and the still brilliant ballad “Don’t Let the Sun Go Down on Me.” It set me off on a myriad of Elton John classics - through about 1982, I think - that I thought the world of. Most of them still sound pretty good to me today.

Elton John always featured his marvelous piano on his songs, with a flair for songwriting that quite obviously outranked and outlived many of his rock ‘n’ roll peers. Best of all, Bernie Taupin gave the singer/songwriter some of the most beautiful lyrics I’d ever heard. I even started writing (lame) songs and poetry at the time, inspired by Taupin’s often oblique and wonderful prose.

In 1976, at the height of Elton John’s fame and glamour, the hugely popular artist, riding high on hit after hit (I seem to recall the stupid “Don’t Go Breaking My Heart” was his big number at the time), issued a live album called Here And There. The title derives from one side of the record capturing a London show while the flip side caught a New York City show.

One of the best songs on the album was a song that Elton John didn’t even compose, Lesley Duncan’s provocatively beautiful “Love Song.” The song was first recorded by Elton John on his great 1970 album Tumbleweed Connection. It was one of the few covers Elton John ever manned at this point in his career.

Lesley Duncan (1943-2010) had issued quite a number of records (mostly singles) throughout the 1960s and got a lot of airplay on BBC radio, but, sadly, never a great amount of worldwide popularity. Her own version of “Love Song” was issued in 1970 by Columbia records (after she performed the song as part of David Bowie’s group in the late sixties), obviously catching Elton John’s attention.

His Tumbleweed Connection version gives the song a simple (and odd, for Elton John) acoustic guitar backing which is fine and not unlike the composer’s original conception. But in 1974, Elton John invited Lesley Duncan – who went on to sing background vocals on Pink Floyd’s epic Dark Side of the Moon and the Alan Parsons Project’s Eve - to sing background vocals during his 1974 performance at the Royal Festival Hall.

Duncan sings behind Elton on John’s tremendously timeless “Skyline Pigeon” (truly one of my all-time favorite Elton John songs), “Take Me to the Pilot,” several others and her own beautiful “Love Song.” This performance of the song was even issued as a single at the time, which is where it first caught my attention. Unfortunately, it really never got the popular attention it deserved.

This performance is absolutely magnificent – and immeasurably superior to the Tumbleweed Connection version as it is backed by Elton John’s magical Keith Jarrett-like piano and the original composer’s own extraordinarily beautiful background vocals. Elton John’s voice had also matured quite a bit since the 1970 recording to present something here that is far more sincere and remarkably moving.

“Love Song” - which Barry White loved so much he did a stunning cover of his own in 1983 - is a great piece of pop heaven. And this version is one of the best there is. Listen for yourself.
Posted by Douglas Payne at 1:50 AM