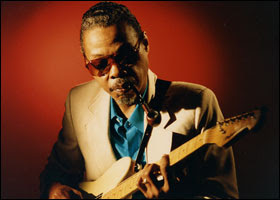 The legendary guitarist Cornell Dupree died on Sunday, May 8, 2011. He was 68 years old. Dupree had earlier been diagnosed with emphysema and was to have had a lung transplant. A benefit concert was held at BB King’s New York City club on March 11 to help raise funds for Dupree’s medical expenses.

Born on December 19, 1942, in Fort Worth, Texas, Dupree was discovered by King Curtis, who brought the young guitarist to New York City, where his meteoric rise began. The guitarist can be heard on King Curtis’s 1963 hit “Soul Serenade.” While still part of the Curtis band, Dupree played alongside Jimi Hendrix and initiated a career as a studio musician, becoming part of Atlantic Records’ house band. This earned Dupree a ten-year tenure with Aretha Franklin, who was one of the label’s superstars at the time. Dupree can be heard on Aretha Franklin’s biggest and best records, notably "Rock Steady."

Dupree contributed to many pop, rock, soul, R&B and jazz sessions during these years, crafting a signature sound along the way that was based on the deep Texas blues he heard growing up. Dupree loved the sounds of T-Bone Walker and Lightning Hopkins, but the syncopated twang in his sound came from an eclectiv assortment of artists from the Lone Star state. “I was inspired by Johnny ‘Guitar’ Watson and Wayne Bennett, who I was fortunate enough to hear with Bobby ‘Blue’ Bland,” recalled Dupree. “There are country and western artists I enjoyed, too, like Hank Williams and Ernest Tubb.”

Around this time, Dupree earned the nickname “Uncle Funky” – which is probably derived from Hank Crawford’s bluesy tribute to the guitarist on the saxophonist’s 1972 Kudu album Help Me Make It Through The Night.

Cornell Dupree launched his solo career in 1974, appropriately on Atlantic Records, with the album Teasin’ (reissued on CD in 2008 by Wounded Bird). But the guitarist was only sporadically captured on record as a soloist, featuring on such albums as Saturday Night Fever (1977), Shadow Dancing (1978), the terrific Coast to Coast (1988), Can’t Get Through (1991), Child’s Play (1993), Bop ‘n’ Blues (1995) and several vinyl sets of guitar riffs designed for sampling. Oddly, much of this music is often repackaged under different titles, making it appear that Dupree’s solo discography is much larger than it really is.

As part of Saturday Night Live’s original house band, Cornell Dupree then became one of the founding members of Stuff in 1975. Fellow members of Stuff included keyboardist Richard Tee (1943-93), guitarist Eric Gale (1938-94), bassist Gordon Edwards and drummers Steve Gadd and Christopher Parker. The group’s first album, Stuff was released in 1976 and became something of a hit, leading the group to play festivals and tour Japan, where the Stuff sound was extremely popular. Stuff waxed three studio albums and several live albums until it more or less disbanded in the early 1980s.

Later in the decade, Cornell Dupree reunited with Richard Tee and Steve Gadd for the drummer’s group The Gadd Gang, recording two studio albums that gave an ‘80s spin to a lot of ‘60s tunes. When the acid jazz craze hit in the early 1990s, Dupree revved up the funk his music hadn’t really had for years and launched into a more committed solo recording career.

By the turn of the century the guitarist formed Cornell Dupree and his Bayou Buddies featuring kindred spirits from the New Orleans scene including bassist George Porter, Jr., drummer Jeffrey “Jellybean” Alexander, keyboardist Marc Adams and saxophonist Brian “Breeze” Cayolle. Then starting in 2006, he formed Cornell Dupree and the Soul Survivors, a ‘supergroup’ highlighting the renowned artistry of pianist Les McCann, baritone saxophonist and fellow Gadd Gang member Ronnie Cuber, bass great Jerry Jemott (who featured with Dupree on many of those Atlantic sides of yore) and drummer Buddy Williams.

There are thousands more. Indeed Dupree himself estimated he participated in over 2,500 recordings. The soulful touch and the loving groove that Cornell Dupree brought to so much music will be sorely missed.

And this doosey needs no words:
Posted by Douglas Payne at 5:56 PM

Really saddened to hear this news. I was aware that he had been very sick for a while, but hoped he would pull through and be able to play again. Cornell was indeed a singular voice. It's every guitarist's dream to develop a sound that is instantly recognised as their own unique voice - Cornell had that in spades. Sadly, I never got to witness his genious in person but there are hundreds and hundreds of beautiful memories from his consistently high session output. There's also a growing library of clips on youtube.
My own favourite Dupree moment has to be his mournful playing on 'I Love You More Than You'll Ever Know' by Donny Hathaway. Heartbreaking but stangely uplifting at the same time.
Cornell Dupree - gone, missed, but certainly not forgotten. RIP