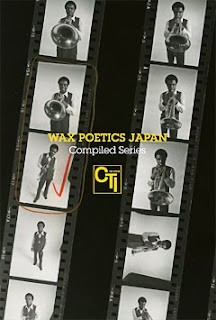 There has been no better or more consistent effort to keep the CTI Records legacy alive and well than what the good folks at Japan’s King Records have done and have been doing since CTI’s inception in 1970. King Records issued all of the original CTI records in Japan right through to about 1984, issuing quite a few that have never been released in the US, and has steadily released dozens and dozens of CTI-themed compilations since 1973 right up through today.

Now, King Records celebrates the four-decade CTI Records legacy by having the editors of Wax Poetics Japan compile three sets of CTI compilations focusing on some of the more significant aspects of the label that also aptly reflect the magazine’s raison d’être.

For those who don’t know, Wax Poetics is one of the finest music magazines currently published. The magazine’s content usually centers on great music makers (musicians, producers, arrangers, writers) from the sixties and seventies – particularly in the soul, jazz, r&b, reggae and world-music genres – loads of rare and ultra-rare vinyl, discographical histories, album cover galleries, coverage on period instruments and recording techniques, and scores of today’s DJs, hip hop artists and producers who reflect on their musical influences. While Wax Poetics also publishes books, produces CDs and makes lots of digital content available, you never get the feeling that you’re swallowing some record company’s press releases or having the “next new thing” being shoved down your throat. It’s a magazine made by music fans for music fans, not shysters who want to convince you that Dylan’s newest album is his very best or that Justin Beiber will restore your faith in something.

In what looks like the first of the “Wax Poetics Japan Compiled Series,” the Japanese editors of the magazine have conceived three sets focusing on CTI music, including Dance Classics of CTI Records, Soulful Vocals of CTI Records and Sample & Breaks of CTI Records. Each set is extremely handsomely mounted, with great cover photos (by Chuck Stewart in two of the three cases), thick 28-page booklets printed on matted stock with full-color reproductions of the album covers for each song featured (plus English and Japanese lyrics for the vocals set) and fairly well-chosen programs of 12 songs each that mostly maximize the limits of CD technology. 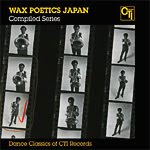 Dance Classics of CTI Records: Star Borne - Johnny Hammond (from GAMBLER'S LIFE); Super Strut - Deodato (from DEODATO 2); Boy, I Really Tied One On - Esther Phillips (from CAPRICORN PRINCESS); Baretta's Theme - Ron Carter (from ANYTHING GOES); You Keep Me Hanging On - David Matthews (from SHOOGIE WANNA BOOGIE); Sugar Free - Hank Crawford (from I HEAR A SYMPHONY); Turn This Mutha Out - Idris Muhammad (from TURN THIS MUTHA OUT); Stanley's Tune - Airto (from VIRGIN LAND); Macumba - Lalo Schifrin (from TOWERING TOCCATA); Corazon - Hank Crawford (from WILDFLOWER); Hard To Face The Music - Idris Muhammad (from HOUSE OF THE RISING SUN); Nights In White Satin - Deodato (from DEODATO 2).

Dance here means disco and there are surprisingly few real classics on tap. Still, it is a surprisingly well-programmed set that holds up remarkably well when heard over its 72-minute playing time. The majority of this music comes from the later period of CTI’s legacy, when disco forced changes on jazz that have yet to be forgiven by jazz audiences but loved by DJs and rare-groove seekers. CTI produced a lot of decent music during this period, but the producers seem reluctant to give over completely to it, adding some cop-show funk (“Sugar Free”), some up-tempo funk (“Super Strut,” “Stanley’s Tune”) and some truly wacky disco-nnects that aren’t very danceable (“Boy, I Really Tied One On,” which was issued as a 12-inch dance single back in the day, and “You Keep Me Hanging On,” which exploited the semi-successful 70s trend of turning old Motown hits into new disco). “Star Borne” is certainly essential, even if it sounds like nothing else in the CTI catalog, and it’s good to hear “Sugar Free,” “Turn This Mutha Out” and “Corazon” here. 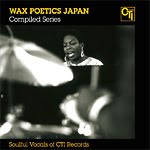 Despite the prominence of Esther Phillips (on CTI’s soul subsidiary, Kudu) and Patti Austin, CTI has more vocal music in its legacy than is often credited. Certainly Esther Phillips is the label’s best-known and most-recorded vocalist but for all the music she waxed for the label, only two of her songs are featured here and only one of which could be considered a classic (“Home Is Where the Hatred Is”). Patti Austin, who shows up three times here under her own name, is one of CTI’s great stylists – a beautifully distinctive vocalist (who also features – without credit – on this set’s “I Hear A Symphony,” “California Dreaming” and “Shoogie Wanna Boogie”) and a remarkably good songwriter (“Say You Love Me,” which here oddly features the strings intro from the original album’s next track “In My Life,” and “Little Baby”), but recorded her best-known music for Quincy Jones after she left CTI. Nothing from Austin’s brilliant 1980 album Body Language album is here either! Soulful Vocals also includes two songs from Nina Simone’s lone CTI album, 1978’s Baltimore, the great title track and the insipid cover of Hall & Oates’ “Rich Girl” (which she detested). The set also includes the little known Phil Upchurch/Tennyson Stephens single “You Got Style” (vocals by Stephens) and several needless soul-disco numbers covered on David Matthew productions. Soulful Vocals is probably the weakest collection of the lot and over its endless 55-minute playing time, really doesn’t hold up as a decent compilation worthy of repeated listens. 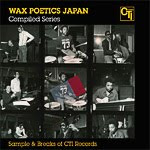 For better or worse, none of the sets here try to banner their originality or lack thereof with the oft-sampled CTI “hit” (“Red Clay,” “Sugar,” “Also Sprach Zarathustra”). But this oddly-titled set wallows in one CTI’s best and most notable realms, jazz funk, and picks out some of its tastier nuggets. Some are well-known and expected (“September 13,” “Rock Steady”) and some are really nice surprises (“I Had A Dream,” “Sister Sanctified,” “Ziggidy Zag”). It should be said that the predominant “jazz-funk” element is tempered on this set, especially during the first half, by plenty of rock elements (heavy backbeat, fuzzy guitars) that give an edge to the music to dissuade any “jazz” critic or nay-sayer. This is good, tough creative music: plugged in and turned on. Wax Poetics Japan makes some decidedly odd choices here, though, including Freddie Hubbard’s nice, little known and hardly funky take on “People Make the World Go Round” rather than opting for the better known and funkier take by Milt Jackson, which also features Hubbard. Instead, Milt Jackson is represented with a rather un-funky take of a Dizzy Gillespie dusty groove called “Olinga” (Dizzy’s version was considerably more spacey and groovier). And this series’ continued insistence on including anything by the excessively iconoclastic (and, to me, irritating) Esther Phillips yields one of her downbeat wasters, “That’s All Right With Me,” rather than something kicking like “Disposable Society” or “Hurtin’ House.” Finally, the inclusion of Hank Crawford’s “Wildflower” ends the mostly enjoyable program on a low note that “Sugar Free” (on the Dance Classics set above) or any number of the saxist’s funky pieces wouldn’t have. Still, the 70-minute Sample & Breaks of CTI Records is the one to get if you can only afford one of the excessively expensive Wax Poetics Japan Compiled Series of CTI Records sets.
Posted by Douglas Payne at 12:32 AM

Watch this or quit betting on sports...

Follow our trades NOW and profit up to 270% daily.