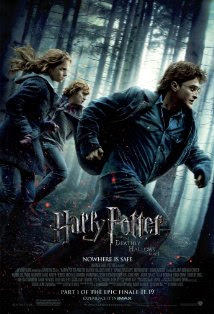 Am I the only one who thinks the latest Harry Potter film is not only the worst film of the entire series, but just a poor excuse for a film?

I have yet to read a decent analysis of this film that isn’t written by some Potterophile or someone who hasn’t been bedazzled for one reason or another by all that’s come before in this sequence of stories and/or films (“the kids/grand-kids like it so I must!”) or someone who thinks the film must be good because so many people will go (and have gone) to see it or someone who laments the end of this endless series of films (honestly these guys can’t play kids forever – and I really hope no one is planning on re-filming these books).

I’ve been told that even author J.K. Rowling thinks this newest film is the best in the entire series. That’s truly as unbelievable as the existence of witches and wizards. Sounds like a bit of PR puffery to me. There’s no way Deathly Hallows Part 1 holds a candle to the film magic created in such previous – and worthy – Harry Potter films as Sorcerer’s Stone (Part 1 – 2001), Prisoner of Azkaban (Part 3 – 2004) or Order of the Phoenix (Part 5 – 2007).

If you have read the book – which I did not and do not feel obliged to do – a film shouldn’t be a sequence of a book’s highlights without any credible shred of linear logic in basic storytelling. It seems like Deathly Hallows Part 1 was nothing but an excuse to see Harry Potter lose more friends, etc. to death, see some nicely filmed vistas (accounting for about two minutes of film time) and parade a bunch of the series’ previous actors on screen – with the notable and inexcusable exception of Maggie Smith in her first absence in a Potter film.

I had no clue who the Hogwarts teacher killed near the beginning of the film was and did not care about her death the way the filmmakers intended (although Alan Rickman’s extraordinarily brief performance in this scene was masterful). They milked it up for all it was worth. But what was the point? Sames goes for the half-hearted McCarthy-esque tale about "the Mudblood scare" which is given provinence, but is scandalously only hinted at. Does Harry solve this crisis too? Who knows (other than readers of the book - or those of us saps who will be forced to see the second part of this trash).

No one properly mourned for Dumbledore or even attended a funeral, though his crypt – in a particularly odd transition that was confusing - was unceremoniously destroyed. But everyone seemed sad and sullen throughout the entire two and a half hours, which dragged on incessantly in a depressing manner. I’m all about down and outs. But couldn’t somebody be happy about something as is often the point in these films? Good Lord, people, cheer up.

And why did kids WHO ARE STILL IN SCHOOL not go back to Hogwarts?

No, I wasn’t overtaken with the power of everyone’s performance here. These people have little chance to act. They’re reacting. There is not one shred of human emotion in this film and this series has plenty of moving moments. Daniel Radcliffe pouting, crying or stripping to his skivvies does not equal acting. Same goes for the other two – although Emma Watson is given a bit more here to do than usual and proves that she is probably a sensational actress worthy of some kind of brilliant post-Potter career.

There’s very little logic to anything that happens in this film, although the Three Brothers story here is marvelously animated and told. Even a fantasy should have some tenuous grip on reality to make it plausible. If you have to explain why anything in this film happens, then it just proves the film didn’t do a decent enough job hitting you over the head with it (like just about any other film would). And, sure, I like subtlety as much as the next moviegoer (haha, little joke), I would like a story that makes sense, not a string of artfully devised CGI set pieces that underwhelm the senses.

I think J.K. Rowling is one of the most over-rated "authors" of recent times - she has basically written the same book seven times. As for the films adults pretending to be kids and kids pretending to be adults is nauseating

I have just installed iStripper, so I can have the sexiest virtual strippers on my desktop.