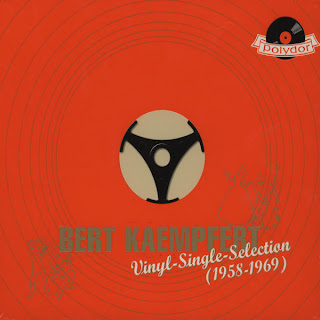 Here’s a curio that’s as surprising as it is sensible. The editors at Bert Kaempfert Music - who have been responsible for a lot of Kaempfert's original albums getting reissued on CD - have teamed up with Universal Music (owners of most of the great orchestra leader’s music) to produce this crazy and collectable 20-disc box of seven-inch, 45-rpm records celebrating the biggest and best-selling records of the great German orchestral band leader, Bert Kaempfert (1923-1980).

Each and every one of these little gems – plus a number of others – was previously featured on the German CD Kaempfert compilation The Polydor Singles Collection 1958/1972 (Polydor, 2000). But here the songs are in their original 45-rpm glory, cased in a thick booklet-like sleeve those old 10-inch classical sets used to be packaged in and comes complete with a booklet featuring the applicable 45 picture sleeves.

It’s a treasure trove for “vinyl collectors and lovers of orchestral music,” though as lovely as some of this music truly is (I’m a huge Kaempfert fan), I would rather listen to this stuff on CD, rather than getting up every two or three minutes to flip or change the record. Still, it makes a nice coffee-table curio.

While it’s hard to imagine the audience they had in mind for this, there is no denying there is some absolutely gorgeous music included on this bizarre little collection:

4. WONDERLAND BY NIGHT (WUNDERLAND BEI NACHT) / DREAMING THE BLUES (1959) from the album Wonderland By Night.

8. DANKE SCHOEN / THE BASS WALKS (1963), The international hit “Danke Schoen” appears on the album Living It Up!.

10. RED ROSES FOR A BLUE LADY / LONELY NIGHTINGALE (1964) from the album Blue Midnight.

11. THREE O’CLOCK IN THE MORNING / NOTHING’S NEW (1964). “Three O’Clock in The Morning” is from the album Blue Midnight. “Nothing’s New” is from the German album Love Letters.

12. MOON OVER NAPLES (SPANISH EYES)/ THE MOON IS MAKING EYES (1965) from the German album Love Letters. “Moon Over Naples (Spanish Eyes)” also appears on the American album The Magic Music of Far Away Places.

Hi, the "Night Dreams" title was omitted from the "The World We Knew" album both in the US and in Germany. It is however included on the Taragon CD-reissue as only a few US pressings of the song title included this.

I am a huge Kaempfert fan myself and believe I have the largest collection.

Thank you for this clarification, Nils. Wish I had that Taragon version of "The World We Knew" right about now!

One more clarification Douglas. I have communicated with Bert Kaempfert Music and has been informed that all the singles are in Stereo. Kind regards. Nils Folke Persson.