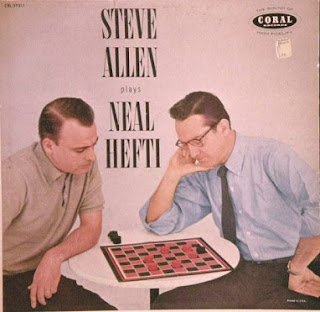 This 1958 album is one of jazz’s greatest secrets. Neal Hefti arranged and conducted a first-class jazz orchestra to accompany pianist Steve Allen, playing at his Basie-like best, and came up with a gem of orchestral jazz that swings like mad and has enough polite personality to appeal to even the most stringent jazz critic.

Hefti had already composed a number of more orchestral albums for Steve Allen, including the hit Music for Tonight (1955), Tonight at Midnight (1956), the superb Romantic Rendezvous (1957), the all-Allen program Venetian Serenade (1957) and Steve Allen Plays Hi Fi Music for Influentials (1958).

These lovely mood-music recordings, produced by Bob Thiele, feature Allen’s piano fronting Hefti’s startlingly gorgeous string arrangements and were designed to compete with fellow TV star Jackie Gleason’s successful Capitol albums. But don’t let that description deter you from tracking this music down. These records are in a class by themselves. Surely they are higher-than-average background music. But they are also a primer in just what made Neal Hefti’s later Hollywood scores so powerfully magnetic.

Steve Allen (1921-2000) has sadly – and more regrettably – never been taken seriously in any of the many, many endeavors he chose throughout his lifetime. This is particularly true as a pianist or even as a musical leader. While he released many records through the years, hardly any is considered a classic. He is also said to have written over 10,000 songs during his lifetime but only “This Could Be the Start of Something Big” and “The Gravy Waltz,” which won a 1963 Grammy Award, were hits.

Allen is now considered more of a pianistic “tinkler,” someone whose musical achievements aren’t taken very seriously. But he was much better than that – and he was far more musically inclined than he is now given credit for.

He may not have been capable of the long solo (and just how often did Ellington or Basie ever take a long solo?) but it may not have been his thing. He was a great stylist who knew how to set a mood and play his part in a big band. In fact, he was a terrific big-band pianist, who knew just when to make a statement and when to let the band do the talking.

Steve Allen Plays Neal Hefti is nothing like any of the pleasant orchestral albums the two did together. Apparently, it was suggested that Steve Allen make a jazz album. At the time, there was no doubt who he wanted to help him make it.

“Neal scored a number of my albums,” says Allen in the LP’s liner notes. “I’ve put lyrics to many of his melodies. There is a sense of musical rapport between us…When it was suggested that Neal and I do a jazz album, the concept was automatic. His writing strength in the big band jazz area, and my affinity for this sort of music, both as a listener and a player, made it a natural.”

Also included is the Neal Hefti-Steve Allen novelty song, “Banana Split,” first heard on a 1954 Jackie Cain/Roy Kral 45 (Coral 61178) and more famously on a 1957 McGuire Sisters 45 (Coral 61924) that featured both Allen’s piano and Hefti’s orchestra. Hefti’s groovy “The Wayno” (named, perhaps, for wife Francis Wayne, in that style that gave Allen his “Steverino” nickname) is new to this collection and a fun little respite.

Soloists include Billy Butterfield (“Li’l Darlin’,” “Oh! What A Night For Love,” “Chug-A-Lug,” “Coral Reef”), Jimmy Nottingham (“Lollypop”) and Ernie Royal on trumpet (“Plymouth Rock”); Gene Quill on alto sax (“Banana Split,” “Chug-A-Lug”), and Seldon Powell (“Sure Thing,” “Lollypop”) and Boomie Richman on tenor sax (“Plymouth Rock”). Allen solos – somewhat in the background – on “Why Not!?,” “Li’l Darlin’,” prominently on “Cherry Point,” “Banana Split,” “Sure Thing,” “Lollypop,” “Oh! What A Night for Love” and “Plymouth Rock” but his shining moment comes on the tremendously invigorating “The Kid From Red Bank,” which the pianist dedicates appropriately to “the ever-young Mr. Basie.”

What are most notable here is Neal Hefti’s gorgeous and discerning charts. Hefti writes with what Leonard Feather defines in his tome The Book of Jazz, as “the classic pattern for jazz orchestral arranging, pitting reeds against brass for ‘call and response’ effects, fusing them for block-voiced ensembles, and always placing a firm accent on a sense of swing, in which the use of syncopation plays a dominant part.”

And swing Steve Allen Plays Neal Hefti does. This is a great record (with terrifically appropriate cover too!), made better by the inventive joy Neal Hefti brings to it. Curiously, many of the same songs – with many of the same musicians – were recorded for Hefti’s Pardon My Doo Wah (Epic, 1958), but vocalists are added to this one. Steve Allen Plays Neal Hefti is a classic and as it has yet to see the light of day on CD, deserves to be far better known than it is.
Posted by Douglas Payne at 11:07 PM

do you know where i can get a copy of Steve Allen His Piano and Orchestra - 1956 - Tonight At Midnight ? I know it was never released on CD or MP3. I would appreciate if you could please help me

Found your blog post while seeking this album on CD (no luck) or Spotify (ditto). Thanks for the informative notes, and for keeping this music alive!