“Strip Nude for Your Killer” by Berto Pisano 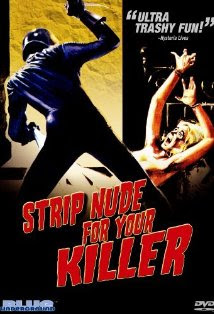 The erudite European film music expert John Bender posted a call-to-arms on the Film Score Monthly board today for some brave film music specialist to issue Berto Pisano’s score for the delightfully obscure and trashy 1975 Italian giallo film Nude per l’assassino (aka Strip Nude For Your Killer). It’s a terrifically well-warranted request for the first-ever release of a (probably brief) score that boasts one of composer Berto Pisano’s finest main themes.

The film, directed by exploitation master Andrea Bianchi (b. 1925), was the first of four of the director’s Pisano-scored film extravaganzas (the notorious “Malabimba” and “Burial Ground” being two others). Undoubtedly, it was the best of the collaborators’ film projects and the best of Pisano’s Bianchi scores.

Coming at the tail end of the great giallo cycle that reigned between Dario Argento’s 1970 film The Bird With The Crystal Plumage and ended with Argento’s own 1975 classic Profondo Rosso (aka Deep Red), Nude per l’assassino has the specific advantage of featuring not one but two of the genre’s undisputed scream queens, the extremely beautiful (and extremely talented) Edwige Fenech and the always game and buxom Femi Benussi.

While the film wallows in some of the genre’s worst excesses (the script’s embarrassing sexism and some crazy, hammy acting, particularly by actor Nino Castelnuovo who plays the detestable Carlo), it also features some remarkably memorable set pieces, a black-leather bound killer and a surprisingly considerable human understanding of loneliness, women in the workplace, lesbianism and obesity.

Nude per l’assassino also features Berto Pisano’s terrifically exciting main theme. Modeled on Norman Whitfield and Barrett Strong’s “Papa Was a Rolling Stone” and enhanced with a pulsating jazz trumpet and Pisano's extremely effective disco string work, the song has only ever featured on the 1997 Gatto Nero CD bootleg Murder for Pleasure: Giallo and Thriller Themes.

But, as John Bender suggests, it’s about time for this theme – and the remainder of the Nude per l’assassino soundtrack, which contains at least one additional strong theme (predictably, a bossa) – to see the light of day on CD. Digitmovies? Beat Records? Anybody?
Posted by Douglas Payne at 8:14 PM

Doug, just stumbled across your posting on Pisano's STRIP NUDE FOR YOUR KILLER and of course I was flattered that you referenced my call on the subject. Thank you! Please consider joining our humble little Yahoo mailing list The European Film Score Society. I know it would be great having you on board (link in URL bar below).
As a friend I must suggest you pick up two new Carlo Savina scores RAGAZZA TUTTA NUDA ASSASSINATA NEL PARCO and NEL BUIO DEL TERRORE. Both are quite lovely. Or I could make you a CDR with "cream-of-the-score" suites. - JohnB

Followed the link to the old FSM post where you wrote "Isn't this the sort of request that should be directed to Digitmovies? I honestly don't see FSM going *this* cult Italian." - Absolutely! I rarely post at the FSM board as the gang there, while large and active, suffer from rather limited musical palates. They usually invite me to feel like a Nazi who accidentally wandered into a synagogue. But - I do still occasionally drop in on them just to let 'em know I'm still alive! / I want to ask: Are there any current scores and/or composers that you find to be very good? I can barely find anything! Loved Giacchino's end title opus for CLOVERFIELD, and certain cues from Desplat have had merit. The fellow who worked on the OCEANS 11 trilogy seemed to be up to something interesting (maybe). - John