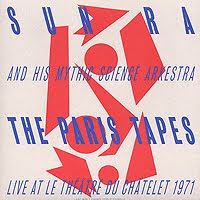 Surprisingly, this remarkable and magnificently captured performance has never been issued on LP or CD before. Sun Ra and his larger than usual Arkestra are caught live here – dancers and all – sometime during 1971 at the Théâter du Châtelet in Paris, France for what is surely one of the Arkestra's finest concert happenings – particularly during this period.

While Ra's Arkestra was recorded live several times during 1971, the personnel and the instrumentation presented here are closest to a October 14, 1971, performance that was captured in Helsinki, Finland and issued on a CD/DVD I have not heard called Helsinki 1971 – The Complete Concert & Interview (Transparency, 2009). So it's a reasonable guess that The Paris Tapes were probably made around the same time, even though the Helsinki disc dubs the Arkestra as "Sun Ra and His Intergalactic Solar Research Arkestra" while the Paris disc credits "Sun Ra and His Mythic Science Arkestra." (Notes writer Chris Trent indicates that the Paris concert came six weeks after the Helsinki concert, but that's probably not right.)

What is here is simply stunning. Ra's El Saturn Records must have had some intention of issuing this exceptional performance, or parts of it, at one time or another because the sound is stunningly well realized. The presumption is that someone in the Arkestra's camp recorded the concert. It surely doesn't sound like a bootleg. Someone recorded this music quite beautifully, stored it especially well and somehow, some four decades later, we can now hear what must have amazed that Parisian audience in 1971.

Here, London's Art Yard label collaborates beautifully with Amsterdam's Kindred Spirits to issue The Paris Tapes, a spectacular addition to the already massive Sun Ra discography. The Kindred Spirits LP features two Arkestra standards from the concert, "Space Is the Place" and "Watusi" and the rather too repetitive and dull Latin-based "Somebody Else's Idea" (an extremely obscure Ra number featuring June Tyson's lead vocal). The Art Yard CD presents the full two-hour and twenty-minute concert over two discs, jam-packed with some of the Arkestra's most compellingly captured and lively music.

Live in Paris is the Arkestra at its most percussive. From the very first notes of the generically titled "Introduction," we're on another aural plane of Ra's multi-visional musical multiverse. As Dusty Groove aptly notes, the effect is more spiritual than avant garde. Perhaps liner notes writer Knoel Scott's one-track script, which proposes among other things, that "Introduction" is the musical soundtrack to racial savaging, is one way to experience Ra's unique musical achievement here. I don't hear it that way at all and I don't believe it was formed or fashioned with that in mind. The pervasive percussion and spacey sounds probably had more to do with Ra's sci-fi positivity: lift yourself up and you can go to outer space.

A strong rock sensibility is present here as well that isn't as obvious elsewhere in Ra's music. It's as if Sun Ra – like Miles Davis – took in Jimi Hendrix, the Grateful Dead and Santana and worked their thing into his own (The Paris Tapes even suggest that Miles Davis was listening closely to what Sun Ra was doing too). Part of that comes out of Ra's helming of the organ and Farfisa keyboard (to wit, the exciting two-part "Love in Outer Space" and the second of the two untitled pieces). But he's played those instruments elsewhere and the effect was not quite like this. Perhaps it's the combination of Ra's electric eclectics and the powerful surge of percussion that make The Paris Tapes feel like the Arkestra's "rock" album.

The entire concert is invigorating from start to finish, but there are several highlights that make The Paris Tapes an essential Arkestra listening experience. The tremendously performed "Third Planet," which the Arkestra also performed at the 1971 Cairo concert captured on Horizon (a Saturn LP also issued on CD by Art Yard), is one of Ra's best and, amazingly, very little known. As a composition, it harks back to the classics of Jazz in Silhouette and Supersonic Jazz. As a performance, it is a reminder of the section work this group was always capable of and, more importantly, the terrifically proficient soloing each and every one of these guys could do – particularly within the stratosphere.

"Watusi," a Ra favorite first heard on the 1970 Fondation Maeght Nights set as well as on the Helsinki and Cairo concert recordings, is an amazing percussion workout that – surprisingly – never gets tired or stale over its mind boggling 23-minute performance. This makes you wonder whether a DVD of this concert, like the Helsinki performance, wasn't somehow available. No doubt this would have been spectacular to watch. It makes for quite a listen as well.

Finally, there is the unusually and unapologetic African variation of "Angels and Demons at Play," where a lone flute floats magnificently for much of the time above layers of dense percussion that tells the story of the song's title better than nearly all of the variations ever waxed of this song. Things get livelier when Sonny comes out to play, blazing his electrified Farfisa organ for a brief respite. It's hard to say who the Farfisa represents. But maybe that's the point. It's a truly wondrous performance; one of the best on record.

The Paris Tapes: Live at le Théâter du Châtelet 1971 is an unexpected pleasure and a valuable addition to the many live Arkestra recordings out there. This is a side of the Sun that isn't very well known and stands among the Arkestra's best captured performances.

(Art Yard has very kindly provided an Adobe Acrobat PDF of the booklet from The Paris Tapes: Live at le Théâter du Châtelet 1971 CD containing Knoel Scott and Chris Trent's illuminating liner notes, the set's track list and musician credits as well as many of Jörg Becker's black and white pictures (presumably) from this performance.)

Posted by Douglas Payne at 1:33 PM

paris tapes is definitely one of the better Ra releases of the past few years. the live at the Horseshoe set is really good I wish the sound was as good as this one. I play music like this on my radio show
http://zeropointradio.blogspot.com/

Thank you for an excellent review. Next on the Ra list!