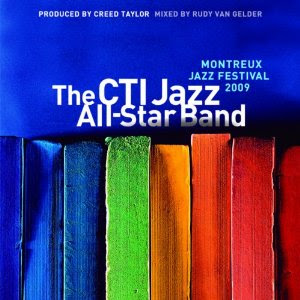 Hardly anyone knew about the jazz event of 2009, when legendary producer Creed Taylor reconvened the CTI All-Stars for several live dates, hinting at another rebirth of the CTI Records legacy. The CTI website never announced the formation of the group and, then, shortly thereafter the site disappeared completely from the Internet.

Then there was the less-than-stellar formation of the group. Sure, former All-Stars like Freddie Hubbard, Stanley Turrentine and Hank Crawford were no longer able to take part. But only original All-Stars Hubert Laws (a CTI recording artist from 1970-75) and Airto Moreira (on many CTI recordings, but a CTI leader between 1972 and 1974) came back for the CTI All-Stars reunion. There was no George Benson. No Bob James. No Ron Carter, who reportedly wanted to be involved. And no Billy Cobham, Jack DeJohnette, Idris Muhammad or Steve Gadd.

Laws and Moreira were joined by trumpeter Randy Brecker, who sat in on many CTI sessions between 1973 and 1990 and was part of the “CTI SuperBand” which toured Japan in 1990 and captured on the “Chroma” album Music on the Edge; electric bassist Mark Egan, who appeared on David Matthews’ 1977 CTI album Dune and was also part of the “CTI SuperBand” in 1990; and the remarkably adaptable drum great Jeff “Tain” Watts, who appeared on two of bassist Charles Fambrough’s exceptional CTI albums from the early nineties (The Proper Angle, The Charmer).

Benson’s guitar chair was filled by Russell Malone. James’ keyboards chair was filled by the game Niels Lan Doky. Airto Moreira’s wife, Flora Purim – a notable soloist in her own right, who also appeared on all of her husband’s CTI albums – was along for the ride and New York-based saxophonist Todd Bashore, who recently toured with Max Weinberg’s Big Band, was contracted to arrange it all.

Then there was the fact that the super-group was only booked for a handful of European festivals in July 2009. Word was that if the shows were a success, the group would travel to Japan for more performances and then take the United States by storm. That never happened. Randy Brecker departed early in order to participate in a Polish tribute and, by all accounts, some of the musicians just weren’t at their very best. Or, perhaps, the amalgamation wasn’t as solid as the original group of All-Stars, who often played on each other’s records anyway, was.

Now, on the occasion of the 40th anniversary of CTI Records, the Japanese King Records label has issued a CD by The CTI Jazz All-Star Band – “Jazz” having been added to the group’s actual performance moniker, presumably, to differentiate this CTI from a British electronic music concern that arose in the 80s – capturing most of the group’s first-night performance at the Montreux Jazz Festival on July 7, 2009 (the date is oddly not provided on the disc). It is the first official CTI CD release since pianist Jürgen Friedrich’s Summerflood, issued in Germany in 1998 and by mail-order in 2003, even though it comes under Japan’s King Records banner and there appears no plan for a domestic release.

The 65-minute disc seemingly celebrates the musical heritage of the label and possibly suggests that CTI might still have something of a future. But what is captured here, sadly, proves otherwise. The performance is energetic enough but hardly inspired, invigorating or memorable in any sense of the word. It’s clear there wasn’t much rehearsal and these folks obviously don’t play together often, if at all. There is no sense of camaraderie or much inspired abandon, but rather a tick-tock sense of waiting to get it all over with and collecting a paycheck.

Inexplicably, the concert’s opener, Freddie Hubbard’s “Red Clay,” a staple of previous year’s All Star concerts, is not even here! According to producer and CTI expert Arnaldo DeSouteiro, who was at the concert, saxophonist Bill Evans took charge and brought the performance to life, but Randy Brecker’s solo was lifeless and unfocused (as he is elsewhere here too) and Airto seemed “sad or bored. Or both.” Still, that doesn’t seem like a good reason to take the song off the CD program unless the recording was particularly horrible. DeSouteiro confirms that the sound that night was less than satisfactory and praises Rudy Van Gelder for his brilliant work in getting the CD to sound as good as it does.

The CD also does not include the band’s take on Wes Montgomery’s “Road Song,” another classic of the CTI catalog; although the corresponding DVD and Blu-Ray releases feature a bonus take of the tune from a Spanish festival performance filmed for Spanish TV the following week.

So just what is here? The disc opens with Weldon Irvine’s groover “Mr. Clean,” first heard on Freddie Hubbard’s 1971 CTI album Straight Life, even though it came somewhere in the middle of the show. Either Todd Bashore’s arrangement or the rhythm section’s perfunctory clocking in of time keep this clunky little piece of funk on low burn. Mark Egan takes a boring first solo on electric bass that forces Todd Bashore on alto sax to liven things up a bit. But Bashore sounds completely disconnected from the basic tune (for which Malone briefly alternates a boring James Brown thing with a more interesting “Pick up the Pieces” vibe). Randy Brecker then solos, also as if he’s playing on a completely different song and not especially well either.

The great “Sugar,” Stanley Turrentine’s signature hit from his 1970 CTI album of the same name, is up next. One of the staples of all of the CTI All-Stars concerts of the early 70s – and the one piece that defined Turrentine until the end of his career – “Sugar” was certainly to be expected and the All-Stars start to deliver here. Bill Evans is most commanding, leading off with grand authority and turning in a solo that would have made the tune’s composer proud. Guitarist Russell Malone also chimes in with a worthy solo that commendably differs from anything George Benson would have provided but, honestly, doesn’t have the musical magic that Benson often brought to the tune. Niels Lan Doky’s fine keyboard solo fortunately relieves Randy Brecker from wasting his time bringing the classic jazz jam piece down (keyboardist Bob James performed Fender Rhodes solos on the piece in years past).

Up next is probably the concert’s single best moment and, for this listener, its greatest pleasure. Airto Moreira’s damned clever and convincing “Misturada,” whose first appearance on a 1967 Odeon album by Quarteto Novo, predates the composer’s CTI heritage, is a finely crafted piece that finally gets everybody playing and interacting at their best. Hubert Laws solos wonderfully on piccolo, followed by Randy Brecker, who snaps into gear here, on trumpet. Drummer Jeff “Tain” Watts then works it out with Airto on percussion and vocals before the intoxicating melody resumes. Flora Purim sings along with melody line, but way, way back in the mix. Apparently she wasn’t feeling too well that night and was unable to perform her “San Francisco River” for the crowd and therefore acted as the show’s emcee. As an aside, Airto and Flora also covered “Misturada” on a 1985 Reference Recording called Three Way Mirror with bassist Mark Egan that featured reed player and former CTI All-Star and recording artist Joe Farrell (1937-86) in one of his final recorded performances.

Airto then caresses Hubert Laws along on a clearly well-appreciated performance of “Amazing Grace,” which the flautist first recorded for his 1973 CTI album Morning Star, recently issued on CD for the first time in the US by Sony’s Masterworks Jazz. This leads into “Bimbe Blue,” a Hubert Laws composition originally heard on the flautist’s very first solo album, The Laws of Jazz (Atlantic, 1964). It’s a fine piece, well worth reviving, yielding terrific solos from Laws on flute and Bill Evans on soprano sax. But, as Arnaldo DeSouteiro aptly asks, “couldn’t the greatest jazz flautist ever have selected ‘Fire and Rain,’ ‘Windows,’ ‘Farandole,’ ‘Feel Like Making Love,’ ‘The Chicago Theme’ or any other hit from his CTI days?” It’s a fair question, but “Bimbe Blue” is especially well handled here.

The oddly titled “Afrika & Brasil” provides a surprisingly lengthy solo spot for Airto, featuring a well-placed quote from his classic “Tombo in 7/4.” DeSouteiro indicates Airto drove the crowd wild with this animated performance. I think this workout prefaced “Misturada” at the concert and its out-of-place appearance here begins the downhill slide of the CD’s curious programming, separated with unconnected breaks that disallow any sort of programmatic connection.

Singer Jamie Cullum, who headlined the ticket in tandem with the CTI All-Star Band, is then brought out to sing only one song, “Use Me,” the great 1972 Bill Withers hit that was also a 1973 Kudu (CTI) single by Esther Phillips (from the album Alone Again, Naturally, issued on CD in 2008 by Reel Music). Todd Bashore’s arrangement is refreshingly unique, second-lining the gospel chart Pee Wee Ellis originally provided to Esther Phillip’s recording to give it a nice and notable New Orleans swagger. The beautiful and gifted Cullum delivers the song convincingly, highlighted with terrific interjections from Hubert Laws, but it oddly comes to a halt just as everybody’s working up a nice head of steam.

This leads to the group’s encore, a performance of Benny Golson’s classic “Blues March,” which is not only one of the oddest and most incongruent choices for the CTI All-Stars (as it has no precedent with either Creed Taylor or CTI other than the presence of Hubert Laws – who is not even featured here – on a 1977 Montreux performance/recording of the tune) but is delivered with especially uncharacteristic bombast. Perhaps it is the sudden appearance of guitarist John McLaughlin (who appeared memorably on the 1970 CTI classic Joe Farrell Quartet) playing an outrageously rock-ish guitar solo and George Duke (who never had anything to do with CTI) jamming on electric piano that render the performance into ridiculousness and as far afield of the CTI legacy and the CTI All-Stars as is possible. Certainly, it’s a strange ending to a disappointingly uneven collection.

To properly understand any dissatisfaction with Montreux Jazz Festival 2009, one need only compare it to one of the very first CTI All-Star dates, spectacularly captured on the 1971 CTI album California Concert: The Hollywood Palladium and magnificently restored on CD recently by Sony Masterworks Jazz. The performers, the tunes (only “Sugar” is common to both sets), the collective synergy and the creative energy united to make the 1971 performance one of the best and most historic all-star performance recordings in all of jazz.

While no one would have expected the 2009 CTI All-Stars to merit that sort of achievement, there was every reason to believe that CTI Records could still make a significant statement at this late date. Perhaps it is simply a reflection of the current state of jazz’s amazingly bleak ambivalence. Very few are making notable jazz statements and those that are aren’t making them for CTI Records. Montreux Jazz Festival 2009 evinces a very sad state of affairs.

To read more about the concert, please check out my good friend Arnaldo DeSouteiro's report from the event, here and here.
Posted by Douglas Payne at 5:43 PM

so glad and excited that I found your blog. I write production stories for EQ, and your blog is a great resource.