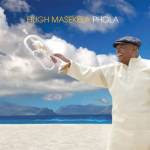 An icon in jazz and a hero in his homeland, South African trumpeter Hugh Masekela turns 70 years old today, (April 4, 1939), celebrating in his beloved homeland with special concerts at the Cape Town Jazz Festival and in his native Johannesburg. The anti-apartheid musical freedom fighter is heard in classic form on Phola, his 35th recording as a leader and second for the Four Quarters label. Masekela is set for selected US dates in Washington, D.C., Hartford, CT., San Francisco, Houston and New Orleans.

Produced by the talented multi-instrumentalist Erik Paliani, Phola features Masekela's fluid, warm-toned flugelhorn work and distinctive vocals on a collection of relaxed, engaging vehicles that blend aspects of jazz, R&B, Afro-beat and township music. From buoyant instrumentals like "Mwanayu Wakula" and the grooving "Moz" (a number ever bit as catchy as his 1968 breakthrough hit "Grazing in the Grass"), to stirring vocal numbers like "Ghana," "Bring It Back Home" and the autobiographical "Sonnyboy," Masekela delivers with old school charm and youthful enthusiasm on Phola (a South African term meaning to get well, to heal, to relax and chill).

After learning the rudiments of trumpet playing, Masekela joined the Huddleston Jazz Band, South Africa's very first youth orchestra. He went on to play in other dance bands led by the likes of Zakes Nkosi, Ntemi Piliso, Elijah Nkwanyana and Kippie Moeketsi, then by 1956 he joined Alfred Herbert's African Jazz Revue. At the end of 1959, he formed the Jazz Epistles with pianist Dollar Brand (later known as Abdullah Ibrahim) and began the first African jazz group to record an LP. By 1960, Masekela escaped the Apartheid state of South Africa and relocated in London, where he studied at the prestigious Guildhall School of Music. Two years later he released his first album as a leader, Trumpet Africaine, on the Mercury Records label.

In 1964, Masekela married South African singer Miriam Makeba and the following year he recorded his breakthrough album The Americanization of Ooga Booga. By 1966, the trumpeter relocated to Los Angeles and recorded The Emancipation of Hugh Masekela, the title of which may have been a sly reference to his divorce that year from Makeba. The massive success of his 1968 radioplay hit "Grazing in the Grass," which sold over four million copies worldwide, made Masekela an international star. By 1970, Masekela and his business partner/producer Stewart Levine formed Chisa Records, a Motown subsidiary which featured the recordings of Masekela as well as The Crusaders, Letta Mbulu and Monk Montgomery. There were about seven releases in the Chisa series, including Masekela's own Reconstruction in 1970 and Hugh Masekela and the Union of South Africa in 1971, before the label folded. Masekela and Levine moved their operation to Blue Thumb Records (1972-74), where the trumpeter began to dig deeper into his African jazz heritage, as heard on 1972's Home Is Where The Music Is, featuring African reedman Dudu Pukwana, 1973's Masekela Introducing Hedzoleh Sounds and 1974's Afro-beat flavored I Am Not Afraid.

Masekela continued to generate hits through the '70s and in the early '80s released some strong albums for Britain's Jive Records label, including 1984's Techno-Bush. He later conceived with playwright and songwriter Mbongeni Ngema the musical Sarafina, which found great success on Broadway in 1988. After being recruited for Paul Simon's Graceland tour, which included a number of prominent African musicians including Ladysmith Black Mambazo and Miriam Makeba, Masekela returned home to South Africa following the release of Nelson Mandela in 1990. He released a string of engaging Afrobeat and township style recordings through the decade, including 1992's Beatin' Around de Bush, 1994's Reconstruction, 1998's Black to the Future and 1999's Note of Life. He scored successes in subsequent years with 2002's Time on Columbia, 2005's Revival on Heads Up and 2007's Live at the Market Theatre, his debut for Four Quarters.
Posted by Douglas Payne at 12:08 AM