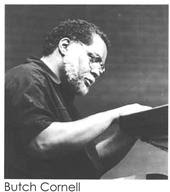 Thanks to my dear friend, producer, musician, educator and jazz historian Arnaldo DeSouteiro for the sad news that keyboardist and composer Butch Cornell passed away in his hometown of Chattanooga, Tennessee, on December 7, 2008. He died of kidney failure.

Born in Chattanooga on November 21, 1941, David C. "Butch Cornell" Randolph Jr., never really got the credit he deserved or was his due as a sweet, soulful player and composer of instantly catchy, soulful anthems. He moved to New York City in the late 1960s and his soulful stylings promptly got him employment with Willis Jackson and Boogaloo "Joe" Jones.

Cornell can be heard on a sadly slim few recordings, including Willis "Gator" Jackson's Smoking With Willis (Cadet, 1965) and several of Boogaloo "Joe" Jone's most notable albums: No Way! (Prestige, 1970 - two songs only, including Cornell's own funked-out "Sunshine Alley" - highlighting an early knock-out feature by Grover Washington, Jr.), What It Is (Prestige, 1971) and Snake Rhythm Rock (Prestige, 1972).

Cornell's most well-known recording is undoubtedly Sugar (CTI, 1970), tenor saxophonist Stanley Turrentine's seminal album, which launched not only his signature hit, but as one of the "great" CTI albums, helped launch the 1970's best jazz label into the stratosphere where it belonged. Cornell's defining "Sunshine Alley" was part of the album's success. But, here, it was taken at a much slower, more deliberate pace than Cornell laid it down three months before with Boogaloo (no doubt, one of Creed Taylor's wise suggestions).

Cornell was part of Turrentine's group at the time, curiously replacing the tenor player's soon-to-be ex-wife, Shirley Scott. Cornell remained with Turrentine for quite a few years thereafter, but somehow never found his way on to many more of Turrentine's records of the period (there are, however, some outtakes that have appeared since then). Creed Taylor, as is well known, was in favor of assembling studio groups in favor of capturing working groups. Perhaps that is why Cornell fell through music's cracks. Who knows why it never happened for Butch Cornell. He deserved better.

Only just found your blog. Cornell may have left town after recording "Sugar" and other laterial for CTI. I have an album ("Midnight special" - Circle CLP4) by an Atlanta tenor player - Eddie Boyd - that features Butch on organ, Jerry Byrd on guitar and Sam Florence (another Atlanta musician) on drums.

The LP has no copyright date (so it must have been '72 or earlier) but the notes by Boyd mention Butch as having recorded with Turrentine, Benson & Grover Washington. So that places the LP in a fairly narrow timeframe.

I'm pretty sure this must have been recorded in Atlanta. Boyd's main gig was Paschal's LA Carousel Lounge and Circle was owned by G H Buck.