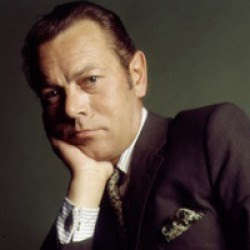 Bert Kaempfert (1923-1980) was one of music's greatest tunesmiths. Largely forgotten today, he has actually contributed a great deal to the popular musical canon. He was responsible for the likes of "Danke Shoen," "L-O-V-E," "Strangers in the Night," "Spanish Eyes" (originally called "Moon Over Naples") and probably another dozen songs that anyone who has ever heard music could hum. None of these tunes really rank highly in my high estimation of the man, but all go far to prove that he really did have a way with a tune.

This guy is the epitome of lounge music or bachelor pad music or easy listening or whatever you want to call it. But something separates his music from the hordes or other lounge acts of the time. His tunes are probably what attracted and captured many listeners as far back as the late 1950s.

Kaempfert used simple little tricks, like basic bass lines on electric bass (unheard of back in the day), and some of the most sensuous arrangements for horns and strings ever heard - equally delivered with utter simplicity. He favored brass. Many of his songs put a trumpet or a trombone in the lead and he often featured some of the best practioneers of the horns in the front of his orchestra. Still, everything sounded so remarkably simple. And utterly catchy.

Bert Kaempfert is someone you either love or hate. For example, my mother-in-law, Irene, loves his music, particularly the tracks noted below. That's because I recorded most of these songs for her to listen to. She loves Kaempfert's "happy beat" and I can't think of a better way to describe it than that. My father-in-law, on the other hand, hates this stuff - especially when Irene forces him to listen to it. Don't know why. It's wonderful stuff. Even the cheese is pleasing. The tracks noted below are definitely keepers. 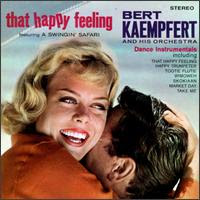 That Happy Feeling (aka A Swingin' Safari - Decca, 1961-62): Bert goes to Africa! How bad could it be? Really, pretty good. It's a lot of fun. I'm not sure Miriam Makeba, et. al. would approve. But it's hard to deny how infectious this music is. The title song pretty much, pardon the pun, apes "The Lion Sleeps Tonight," but its infectious groove is impossible to get over. It was also used as the theme to the TV show The Match Game from 1962-67. Also here is "Zambesi," "Tootie Flutie," "Black Beauty" and "Skokiaan." Plus, "That Happy Feeling," "Market Day" and "Happy Trumpeter." All in all, this album is a real winner. See below for "Afrikaan Beat," which first appeared on this album.

Afrikaan Beat (Decca, 1962): Contains the wonderful title hit, which first appeared on That Happy Feeling album above and was wisely and successfully used in the 2002 Jack Nicholson film About Schmidt (great horns and great strings!). That film's composer, Rolfe Kent, is the contemporary equal of Bert Kaempfert in many ways, contributing great scores and luscious songs to many films such as this one, Sideways ("Wine Safari"), Thank You For Smoking and Matador among many others -including the cable TV show Dexter - although, criminally, many of the soundtracks to these films and shows are never devoted exclusively or even mostly to Kent's fine music. 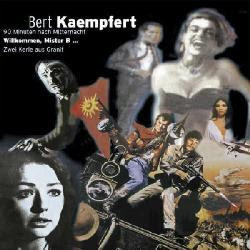 90 Minuten Nach Mitternacht (Terror After Midnight) (Polydor, 1962): Bert Kaempfert's soundtrack to a 1962 German psycho thriller is a rather jazzy affair offering several highlights including the particularly charming "Let's Bowling" and the ever delightful "Mexican Road" (great horns, great strings and great electric bass!). Both of these songs would be much more popular if they'd shown up somewhere else. They rank among BK's best work.

Living It Up! (Decca, 1963): The party album. This collection of jaunty, mostly up-tempo tunes - up-tempo for this kind of thing anyway - heaps with all kinds of fun. Features "Gentleman Jim," "Dutch Treat," "Two On A Tune," "Living It Up" and "Easy Going." And listen to how Bert Kaempferts up "In The Mood" for evidence of a delightful musical signature.

That Latin Feeling (Decca, 1964): An utterly tremendous album from start to finish. This one aims for something between the Tijuana Brass and Bossa Nova, both popular sounds of the time, and succeeds surprisingly well. Features the gorgeous "The Bandit (O' Cangaceiro)," one of Bert's finest-ever arrangements, "Chicken Talk" and, of course, the wondrous "Bert's Bossa Nova," which found new life in Nicola Conte's "Bossa Per Due." Also scores: "Sweet And Gentle" (great strings!) and "Mambo Mania" (great horns!). Even "Poinciana" has a hauntingly hypnotic vibe. One of Bert's best.

Blue Midnight (Decca, 1964): Features two hits by Al "He's The King" Hirt ("Java" and "Cotton Candy"), who did his own Kaempfert tribute four years later, Hirt Plays Bert (RCA), which also features a version of this LP's "Red Roses For A Blue Lady." High points: "Free As A Bird" and "Treat For Trumpet" - both spotlighting trumpeter Fred Moch. 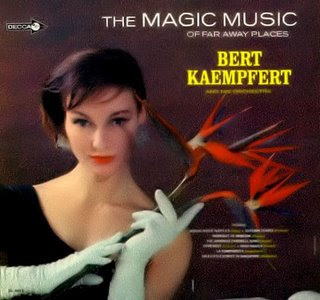 The Magic Music Of Far Away Places (Decca, 1965): This album nearly screams silly from the exotica title and its attempt to capture every musical mood on the planet at the time. But it's really an enchanting listen - if you can go from the sounds of Singapore ("On A Little Street in Singapore") to "Hava Nagila" and all bizarre cultural sound posts in between. Features the charming "Mambossa" (originally recorded during the That Latin Feeling sessions and included on the German Polydor two-fer CD of that title). The 1997 Taragon CD also features five bonus tracks including the delightful and previously unreleased Kaempfert compositions, "Latin Strings" and "Happy Whistler's," both from 1964. 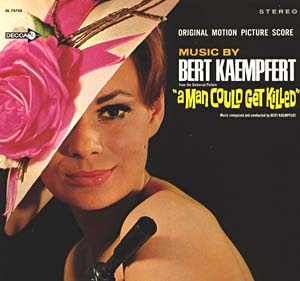 A Man Could Get Killed (Decca, 1966): Kaempfert's soundtrack to this James Garner spy spoof launched "Strangers in the Night," which, of course, was made famous by Frank Sinatra. There are several variations of "Strangers" here, if that is too your liking, but the best choice here is the jazzy "Beddoes Shadows" (Garner's character's name is Beddoes) and the partial cue, "Key Note." The American release of this album has a great cover. 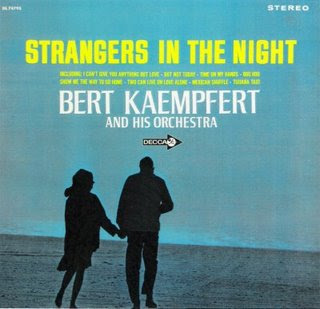 Strangers In The Night (Decca, 1966): Released to capitalize on the popularity of the title song - though the album's cover makes you think this is just another lounge act covering another lounge hit rather than the composer covering his own huge hit - this album's best tracks are its Tijuana Brass covers, "Tijuana Taxi" and, more notably, "Mexican Shuffle" (the Sol Lake song from Alpert's 1964 album South of the Border). Also notable here is Kaempfert's "Milica." The same recording of the tune was also featured on Kaempfert's 1967 Decca album Hold Me as "Sweet Maria."

…Love That Bert Kaempfert (Decca, 1968): The decline begins. Rock is selling. Bert isn't. Solution? Rock Bert Up. Sort of. Check out how Bert tries to turn Ellington's "Caravan" into "These Boots Are Made For Walking." This is really where the cheese starts spewing out of your folks' (or grand-folks') hi-fi. It's big band for old-timers who want to be hip. Kaempfert's "The First Waltz" stands out, though, only because nothing else does.

My Way Of Life (Decca, 1968): A little lame. But the stunningly simple and utterly gorgeous "Malaysian Melody" is here. "Soul Time," which is here too, is cute and totally listenable. "Memories of Mexico" has a few fun little moments - even if it could be called "Memories of the way Bert Kaempfert used to music-up Mexican themes." 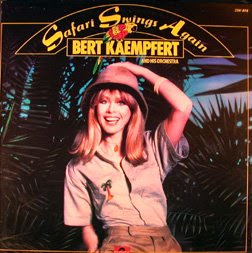 Safari Swings Again (Polydor, 1976): Meant as a sequel to 1962's A Swingin' Safari (aka That Happy Feeling), there is something oddly charming about this anachronistic and wonderful album. Coming only 14 years after the original, a whole lifetime in music had passed by then. The Beatles and Jimi Hendrix, both of whom owe something to Kaempfert, had all come and gone. But you'd never know it listening to this record. It almost proves the timelessness of much of Bert Kaempfert's music, despite the fact that this would have seemed hopelessly out of date in the age of Saturday Night Fever. Almost every track here is a winner but "Happy Safari," "Soft Shoe Safari," "Limbo Lady" "Walking with Fips" and "Seven Up" stand out. "Fips," which was Kaempfert's nick name, is the best; a recollection of the good old days. Note the interesting touch of Basie throughout.

Tropical Sunrise (Polydor, 1977): One of those albums that does exactly what the title claims it does, but probably about 20 years after anybody would care. Still, this is beautiful music that deserves better. Notable: "Dreams (Sueños)" (a sort of Bossa Bond), "Your Move (Tu Movimiento)" and "Tropical Sunrise," all written by Bert Kaempfert with Herbert Rehbein. Also worth it is Bert's beautifully arranged version of the well-known "Island In The Sun" - absolutely worth repeating. 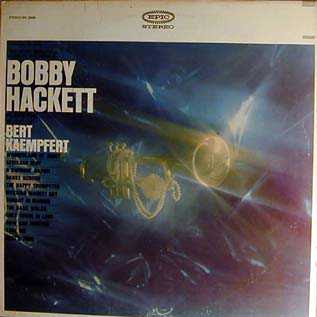 There were many Bert Kaempfert tribute albums recorded back in Kaempfert's day, but one of the better ones is probably Bobby Hackett Plays Bert Kaempfert (Epic, 1963 - reissued in 2002 on a Collectables two-fer CD with Bobby Hackett Plays Henry Mancini) where the trumpeter waxes rather elegantly over such chestnuts as "A Swinging Safari" "Mexican Market Day," "The Happy Trumpeter" and, notably on "Afrikaan Beat." The album was arranged by Dick Hyman, so you know it swings and Hackett really brings Kaempfert's melodies to life.
Posted by Douglas Payne at 1:30 AM

I grew up on the Blue Midnight album, my parents' record of choice for company. The sound had an atmospheric late night, lights low, highball glasses tinkling, curling blue smoke vibe. The trumpet, used heavily as the lead instrument, and that plectrumed electric bass with the ethereal female background singers, is a sound at once exotic and very much of its time and ilk. The tunes were all good, including Red Roses for a Blue Lady and It's Three O'clock in the Morning--the reasons my parents bought the disk--and they occupy a kind of weird mystery zone jazzy but not quite jazz. Very European. From a time when pop music was made for adults. Ah yeah, nostalgia.

Thanks for this great article on Bert Kaempfert. Listening to Tropical Sunrise (on vinyl!) at the moment - I stumbled upon this blog while listening to the LP and trying to find info about this album.