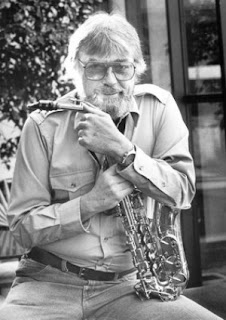 Clifford Everett Shank Jr., or "Bud Shank" as everyone knew him, died of pulmonary failure at his home on April 2nd in Tucson, Arizona. He was 82. Born May 27, 1926, in Dayton, Ohio, Bud Shank became an important fixture in West Coast jazz by the late 1940s. While specializing on alto sax, inspired, no doubt, by Charlie Parker, Shank had also mastered any number of other reed instruments by this time - particularly the clarinet (which he learned first, at age 10), tenor sax, oboe and flute.

He was one of the very first to define the "West Coast Cool" sound of the 1950s, but he also ventured much further into the music than he's often given credit for. He was a fixture in Stan Kenton's best bands of the 1950s. He later became one of the first American jazz musicians to record Bossa Nova music (with Laurindo Almeida), long before the popular music wave swept over the world. He also recorded with Ravi Shankar in 1962, years before the rest of the world (and The Beatles) discovered the charms of Shankar's music.

Aside from these many great and often historic jazz dates, Shank played on countless film and TV sessions while in Los Angeles during the 1960s and 70s. Shank - who was often billed as "C.E. Shank" on these otherwise anonymous recordings - performed on many soundtracks such as The Thomas Crown Affair and pop records by The Mamas and The Papas.

He also appeared on many of Lalo Schifrin's most memorable recordings including Mission: Impossible, Mannix, (notably) Bullitt, Kelly's Heroes, Che, Planet of the Apes, Brubaker, Way…Way Out, The Venetian Affair, Braddock, How I Spent My Summer Vacation and probably many others I don’t know about as well as such Schifrin concert pieces as The Sphinx (1965) and Pulsations (1971).

The Los Angeles Times obit is here.
Posted by Douglas Payne at 12:52 AM