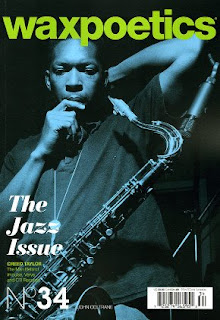 The CTI story is indeed a fascinating one, as I've recounted in great detail on my CTI Records site, and Leonard's profile is a cogent reminder of not only how influential CTI Records was back in the day, but how significant Creed Taylor is to the history of jazz recording.

Leonard's profile allows the participants to pretty much tell the story, thankfully detaching the author from much of the fawning fan praise that often goes into stuff like this (one writer, in particular, who is mysteriously always asked for purple prose PR-like quotes on Creed Taylor is thankfully ignored here). Leonard also disregards some of the hindsight-is-20-20 critical overtures that others seem to make after an empire's fallen.

Leonard has his subjects bravely confront many of the conflicting messages and taboo subjects that are part and parcel of the CTI story. While this was obviously not a roundtable discussion, it is refreshing to hear such participants be objective and open to real discussion. The effect comes off as offering more truth to history than legend.

Nothing especially revealing comes out of the profile for any readers moderately familiar with my site. But there are many very good reflections. Leonard gives you the sense that you are listening to a conversation rather than reading a cobbling of the separate interviews it really was. He's wise, too, to get the info from more than one source.

Indeed, I believe Leonard did a far greater profile here than I would have done for the magazine. He also elicited the following information that provided insight to my understanding and deep, life-long appreciation of the CTI Records legacy:

Bob James: One of the things I can remember is that Creed and Rudy [van Gelder] would not let the records be longer than eighteen minutes on a side. If you went any longer, you have to squeeze the groove. You'd lose bass, and you'd lose quality. Rudy would make the groove wide, which translates into better bass. I really think that's one of the reasons Ron [Carter] became such a big star. Those CTI records just made him sound so good.

John Snyder [Copying the CTI formula]: It was Creed. Those other guys just didn't have everything right. It's the guy. It's him. You can't replicate that. The art of making a record is not just putting up a mic in front of a group of guys who make music together. It's not capturing something. It's creating something. Records are illusion. They are like movies. When you go [see] Batman, you know it's not really happening. But you buy into it. You say this is a rational universe. That's what Creed did. He made it look like the rabbit was really coming out of the hat. That's not something anybody is born doing. I don't know of anybody who did it better than Creed - whether you like it or not.

That says it all about the enduring magic of CTI Records. It was something that Creed Taylor created, something that made the musicians millionaires, if not entirely artistically satisfied, and something that truly resonated with more jazz buyers than most any other jazz music in history (CTI-bashers never take that into account).

As a listener, I've gone on to buy much more of the music that CTI artists made after they left CTI. While there are certainly some classics and stand-outs in that huge swath of records and CDs in the intervening four-some decades, sadly too little of it bested the work these artists did while they were housed - however briefly - at CTI Records.

I would like to have read more here about Taylor's days at Verve and how they influenced some of his thinking toward the formation of CTI and more of the story behind his relationship with A&M Records in the late 1960s. It would also have been good and more fair to discuss the awkward pre-Red Clay early days of CTI, when Taylor had envisioned a very different entity than the CTI that everyone came to know.

I do take exception to Leonard's claim that "one of the last great records [Taylor] made was Chet Baker's 1974 album She Was Too Good to Me" (said, perhaps, because of the questionable condition of the trumpet player at the time). It really isn't a great album. There are just some questionably "great" stories behind it. Which begs the question, why no discussion of so many other "great" albums at CTI? There are some good stories for some good records here. But no analysis of the "great" albums that made the label as important as the profile rightly claims it to be.

There were any number of "great" CTI records made after the Chet Baker album, most notably Jim Hall's 1975 album Concierto, and others that may be a bit more arguable, such as Dave Matthew's 1977 album Dune, Studio Trieste (1982) and still a slew of "good" ones from Grover Washington, Jr., George Benson, Lalo Schifrin, Bob James and others.

All in all, Devin Leonard's piece is a very good read that will be of great interest to aficionados of CTI Records, Creed Taylor and, most notably, jazz in the 1970s.
Posted by Douglas Payne at 5:46 PM