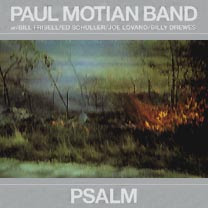 Hard to believe this album was recorded nearly 30 years ago, in December 1981. It seems a lifetime ago, and indeed it probably has been a lifetime since then. Imagine the changes to jazz and to music itself. Just goes to show the timelessness of what ECM has tried to capture and, perhaps more notably, the timelessness of what drummer and composer Paul Motian (b. 1931) set out to accomplish.

Imagine too, how each of the musicians in Motian's band have changed since then too; although, it is with great pleasure to report that all five are still among us, continuing to make music today.

Psalm is the first recorded evidence of drummer Paul Motian's group with guitarist Bill Frisell (b. 1951) and saxophonist Joe Lovano (b. 1952) - many years before either found success on their own.

Only the drummer's fifth solo album since 1972 - and his fifth on the ECM label (he's recorded prolifically since then for Manfred Eicher's label as well as other discs for the Soul Note, JMT and Winter & Winter labels), the disc also features Ed Schuller (Gunther's son, born 1955) on bass and Billy Drewes (b. 1952) on saxophones.

It's a most remarkable disc and, somehow, it takes on new meaning after all these years. I admit I heard this album about a half a lifetime ago and it didn't move me at all. Now it does. The seeds of the entire downtown movement can be heard right here. Yes, right here. Can it be that Psalm was the first downtown jazz album of the 1980s? I think so, yes.

Motian, as he often does on many of his discs, composed all of the eight pieces heard here. He has always been a slippery composer, avoiding overt melodies in favor of melodic lines or melancholy ideas that allow his band to improvise in, on or around. No exceptions here. However, there are some stronger than usual themes present.

"White Magic" suggests Ornette Coleman in Prime Time mode, with Schuller laying down a particularly strong Charlie Haden-like line. On up-tempo tunes such as this and "Second Hand," Schuller provides much of the group's overall success.

"Mandeville," unquestionably the disc's finest moment, presages Frisell's launch into folk themes a decade and a half later. Here, Schuller actually suggests Marc Johnson (who, like Motian, a former Bill Evans sideman, would go on to work with the drummer years later) and Motian even provides something of a lesson plan here that the great Joey Baron could gravitate towards.

Frisell sounds a little different here than expected. He is, of course, melodic and wonderfully respectful of the melody. But he brings something of an edge to his playing here that is the province of youth and rebellion; something that is as appealing and satisfying as it is challenging (of expectations) and unsettling (if you are looking for straight-line acknowledgement of themes). No doubt, he would deliver this wonderful theme much, much, much more differently today.

Frisell is much more dominant here than I remember - surprising, considering his lack of identity or name recognition at this time - more or less providing the backbone for the quiet "Psalm," the beguiling "Etude," the haunting "Fantasm," the quixotic "Yahllah," the rockish "Second Hand" and the more rambunctious rock of "Boomerang."

It's amazing to hear how distinct Lovano sounds here, too, having become more predominant as time goes on, but sounding confident and very much in his own bag throughout ("Boomerang," "Fantasm").
Posted by Douglas Payne at 12:21 AM