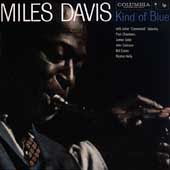 Jazz has turned out many essential records. Trumpeter Miles Davis has contributed more than his share of most of them too. But the one absolutely essential jazz record of all time is Miles Davis's Kind Of Blue.

No matter how old you are. No matter what your experience with jazz is. No matter where your tastes in jazz run. There is no better, no more perfectly conceived, no more artistically gratifying, no more satisfying jazz album imaginable than Kind Of Blue. Period.

It is Miles Davis's best selling album. It is probably one of jazz's best-selling records. And one half of a century later, it remains one of Columbia's (now Sony) best-selling discs, which possibly excuses the shameless reissue program the label instituted for the album many years ago, through many varying formats and technologies.

Today, there are no less than four (probably more!) distinctly different versions of this disc available that you could pick up. But no one needs anything more than the album's original five songs, in whatever format one feels is the best way to hear it.

Recorded at Columbia's 30th Street studios in New York City over two sessions on March 2, 1959, and April 22, 1959, Kind Of Blue features some of jazz's all-time greatest players - Davis on trumpet, Cannonball Adderley on alto sax, John Coltrane on tenor sax, Bill Evans or, on one number, Wynton Kelly on piano, Paul Chambers on bass and Jimmy Cobb (the only currently surviving member of the band) on drums - playing some of the world's best-known - and original! - jazz themes: "So What," "Freddie Freeloader," "Blue In Green," "All Blues" and "Flamenco Sketches."

Whenever someone who knows nothing about jazz asks me where to start in the great world of jazz, I don't think twice. Kind of Blue is always right. No questions asked. No second thoughts. Of course, this is the "cliché classic" that others who claim to like jazz will go to great lengths to avoid recommending.

But this is unwise. I always caution the curious that Kind Of Blue hardly represents the entirety of jazz and most certainly does not represent the complex lineage of Miles himself. Yet Kind Of Blue offers many glorious gifts that can help guide someone in the direction of jazz they want to go.

It's indisputably the finest moment jazz ever reached.