Philip Glass "Notes on a Scandal" 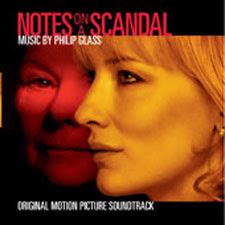 The music of Philip Glass seems especially tailored for the cinema. The drama and the patterns of tension he embeds in his songs are very much like the stories made for film.

The instinctive use of repetition he employs throughout his music, no matter what it is (Glass has a great body of work outside the medium including operas, symphonies, concertos, etudes, suites, song cycles, etc.), even suggests something especially suited for film.

Considering he became one of the 20th Century's most popular composers and one of the few classical composers who achieved popularity and success during his own lifetime (probably thanks to all the advances of his era's technology), Philip Glass remains one of music's greatest storytellers. He is also one of music's most distinctive craftsmen.

Now approaching 70, Glass has long been recognized as a cinematic artist. One of his earliest successes is for Paul Schrader's Mishima, a most unusual film that is greatly enhanced by a most unusual and perfectly suited score by the iconoclastic composer.

The way Glass aurally conveyed the anxiety of the unknown in Erol Morris's The Thin Blue Line (1988) was especially commanding and convincing. Rarely has music so influenced a story and, in this case, a true story.

Along the way, Glass classed up several horror films like Michele Soavi's The Church (1989) and Clive Barker's Candyman (1992 and its 1995 sequel), several documentaries and Martin Scorcese's Kundun.

As he entered the new millennium, the composer had finally earned the distinction of being a first-choice film composer, providing memorable, often exceptional, music to The Hours (2002), The Fog Of War (2003), Secret Window (2004) and the otherwise awful The Illusionist (2006).

Here, Glass provides the hauntingly elegant foundation for Richard Eyre's beautiful, near brilliant character study, Notes on a Scandal (2006). It bears all the diverse qualities that Glass so often brings to his documentary, horror and art films - all genres that aptly describe this film.

The film's soundtrack, issued on Rounder Records (!), adds a note by the film's director that perfectly states exactly what Glass has achieved in this score:

"Notes on a Scandal is an adaptation of a novel that tells its story entirely through a first person narrator. No film can achieve the sort of total subjectivity that a novel is capable of. So we wanted a score that would help to enforce the sense of the story being viewed through the eyes of the main character, Barbara Covett (played by Judi Dench). The score (in my view brilliantly) reflects and reveals her interior life, helping to emphasize her self-delusion and her subjective view of events. In addition the music provides a pulse to a story of two women getting drawn, through loneliness and obsession, into an emotional vortex."

It's hard to put it much better than that. Notes on a Scandal is a beautiful piece of work and certainly one of Philip Glass's finest and most distinctive film scores. The structure here could be called "notes on an obsession" and owes something significant to the formality and grandeur of the music Bernard Herrmann wrote for Hitchcock, namely in Vertigo (1958), Psycho (1960) and Marnie (1964), all films which could be said to have some influence on Eyre's film as well.

The music "speaks" in the film almost as loudly as Barbara's voice, sometimes louder. This may register annoyance among casual viewers of the film. But Eyre's point is apparent to any viewer who is drawn in by the mood of longing and loneliness that is otherwise visually established in the film.

Glass's music and Barbara's voice are quite inseparable as the music provides the passion for Barbara's words and also suggests something much greater that her own thoughts can't even comprehend. Like Herrmann's music, the Glass score becomes a character in the film and, like Herrmann, much of it stands strong on its own away from the film.

The 51-minute score CD offers more than a few discordant moments of "uneasy listening," including the odd tension in the otherwise sprightly "First Day of School," the tilted (jilted?) whimsy of "The History," the approaching storm of low strings in "Good Girl," the rumbling arpeggios of "Someone has Died" and the unsure triumph of "Going Home." Each of the titles vividly describes the scenes Glass so faultlessly enhances.

The Herrmann influence is present throughout, most notably on "Invitation," which serves as the film's main theme (and evolves into the disturbing "A Life Lived Together"), with the stately and brilliantly conceived idea of "the hunt" (ref: Marnie), "Courage," which suggests those scenes where Scottie obsesses over Madeline in Vertigo or where Norman watches Marion in Pyscho, and the way resolution or closure is thwarted by suggesting a new obsession in "I Knew Her" (think of how happy many of Hitchcock's endings are, notably the ones in the three aforementioned films).

Notes on a Scandal is a tremendous film and this soundtrack is an entirely satisfying and appropriately unsettling listening experience.
Posted by Douglas Payne at 6:21 PM

Get professional trading signals delivered to your mobile phone every day.