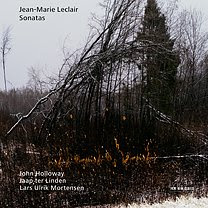 Violinist John Holloway (b. 1948) has a special fondness for what has become known as the baroque period of the 17th and 18th centuries.

While Handel, Vivaldi, Telemann and, of course, Bach, hardly ever did anything not worth hearing, savoring and appreciating over and over again, this period of music - and all of its incredible composers - make for especially thrilling music to discover.

Biber, most notably, is a revelation to this listener. His dramatic and always melodic compositions strike me as something like jazz mixed with the odd-sounding combination of church music and what became 20th century country and western music. There's something very soulful, refreshing - even new - in this music and it takes someone as passionate and caring as Holloway to bring it back to life.

Holloway, whose relationship with Manfred Eicher's ECM Records goes back a full decade to 1999's Unarum Fidium (ECM New Series 1668), has made an exceedingly notable impression with his two Biber-based recordings for the label, 2002's excellent Unam Ceylum (ECM New Series 1791) and 2004's almost-as-wonderful Biber/Muffat - Der Turken Anmarsch (ECM New Series 1837). These are all thrilling discs, made brighter by the ardor and virtuosity Holloway brings to the music.

These three were responsible for 2005's lovely Veracini Sonatas - and it's the same format Holloway used on the two Biber discs. It's amazing how these three instruments can suggest something much greater, much more significant, something more orchestral than you can imagine by three sets of hands. It's even more wondrous when you consider how Holloway's musical endeavors "whisper" music like so much a part of nature.

Remember those ECM ads from the 1970s where the label claimed to be "the most beautiful sound next to silence"? This is exactly what they meant.

Leclair, founder of the French violin school, is highly respected among classicists but he's hardly known at all among listeners today, especially among classic music enthusiasts. As a violinist himself, he brought great authority to his music - indeed, as he progressed, the music became more clever than listenable. He probably was not as successful as his compositions should have allowed him to be. Later in life, he wrote some ballets and operas, none of which were particularly successful. He died - or was murdered, under mysterious circumstances - nearly a recluse, all but forgotten and pretty much lost to the ages.

Rather than offer an overview of Leclair's sonata output - which forces me to recommend the 2001 CD, Leclair/Locatelli - L'Ange et le Diable CD by The Rare Fruits Council - Holloway chooses here to do five of the 12 sonatas from opus 5, which offer what he feels are the more melodic, less musically showy pieces in the composer's canon.

This is immediately apparent, with the warm and loving delivery Holloway and company provides throughout the disc. Leclair probably wasn't the composer Handel or Bach was. But that hardly renders what he achieved as inconsequential. Each of these four-part pieces is lovely, intellectual and almost spiritual.

While nothing here compares to the jagged edginess of Biber or the stately loveliness of anything by Handel, it is wonderful music delivered most lovingly by one of baroque's most passionate spokespersons, John Holloway, and his incredible synergistic trio.
Posted by Douglas Payne at 12:12 AM