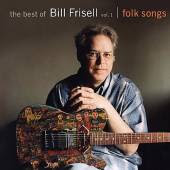 If anyone deserves a compilation, it's Bill Frisell. In fact, he probably deserves more than a few. This prolific guitarist has recorded so much that even the most ardent fan would have trouble keeping up with his output. But compilations are a tricky business and especially confusing to anyone wondering whether they already have such and such or so and so by someone as well recorded as Bill Frisell.

Frisell's latest compilation, The Best Of Bill Frisell Vol. 1 - Folk Songs is the first that attempts to sum up his voluminous Elektra Musician (1988-91), Elektra Nonesuch (1992-94) and Nonesuch (1995-present) recordings - about the time he started performing the music which gives this set its title.

In an effort to determine which of these pieces I already had, I put together a mini-discography to assess what is here (bless anyone who attempts to compile the complete Bill Frisell discography):

This is a marvelous collection. The folk theme is ideal and serves Frisell's direction more than adequately. Lord knows, another few discs of Frisell's like-minded themes could be successfully compiled in addition to those exclusively covering the blues, jazz standards, country and western, pop and R&B hits and the guitarist's stunningly beautiful originals ("Keep Your Eyes Open" from Nashville is just one such example).

The "folk" idea is something that's made so many of Frisell's records in the past two decades as interesting as they have been. Despite the critical disparagement Frisell has suffered from so much of the jazz community for taking this path, the guitarist - one of the most original and wonderful guitarists to ever grace music without borders - has found a direction that makes sense and makes him as wonderful to hear over and over again. 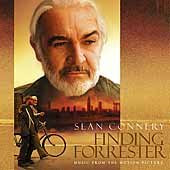 It's also worth considering the 2000 soundtrack to Gus Van Sant's film Finding Forrester. I happened upon this knowing there was no commercially available recording of Frisell and Wayne Horvitz's incredibly wonderful "Weepy Donuts" theme for the end titles of Van Sant's 1999 film Psycho and discovered, unfortunately, that most of the music here has been issued before as well.

This intriguing and cohesive soundtrack was compiled by the great Hal Wilner (who was also responsible for Frisell's appearance on The Million Dollar Hotel soundtrack shortly thereafter) and features several "recollections" of music from Miles Davis and Ornette Coleman as well as Frisell pieces including "Under A Golden Sky" (from Ghost Town), "Coffaro's Theme" (from Bill Frisell Quartet), "Beautiful E." (from Where In The World) and a solo guitar performance of "Over The Rainbow (Photo Book)" that does not appear anywhere else.

I really wish someone would issue Frisell and Horvitz's "Weepy Donuts," a title Psycho-scorer Danny Elfman uses on many of his scores (i.e., Good Will Hunting) and one which finds Frisell and Horvitz beautifully riffing off of Bernard Herrmann's music, on CD. But a full decade on, it's unlikely to happen at this point. There certainly is, however, enough of Frisell's music available to keep anyone interested though.
Posted by Douglas Payne at 2:52 AM

I agree! I'm cannot find this song for purchase anywhere. So aggravating. It's such a transporting and intriguing piece of music.

Professional trading signals sent to your mobile phone every day.