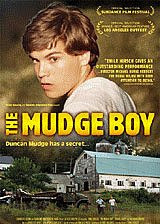 Writer and director Michael Burke developed The Mudge Boy as a Sundance project, where the film had its initial screening in 2003. It's a simple story of a small-town boy, Duncan Mudge (Emile Hirsch), who at 14 has recently lost his mother and must fathom the world on his father's farm in a very rural Vermont backwater.

Duncan has a pet rooster he calls Chicken, which, of course, makes him a laughing-stock outsider in his small town, where being "normal" is more important than, well, anything else.

Duncan's grief over the loss of his mother - who, it is hinted at, was probably pretty troubled herself - forces him to take her role in the house, cooking for his father, pretending to be his mother and occasionally wearing her clothes - something which disturbs his father (Richard Jenkins) beyond comprehension.

Duncan forms an uneasy alliance with an older boy, Perry (Thomas Guiry), who alternates an unpredictable bullying nature (he's regularly beaten by his father) with a certain kindness and attention to Duncan.

This is Duncan's world and, despite the beauty of the landscape and the seeming kindness of the people, it's a harsh, sad and lonely place for all concerned. As Duncan, the extraordinary Emile Hirsch conveys this awareness and the confusion in simple looks that reveal deep hurt, unspeakable pain and aching, unsolvable loneliness. It is a riveting performance and, ultimately, a most moving one.

There is one scene in particular - a notorious scene that is too often wrongly called "the rape" - where Duncan's tears say more than we'll ever know. Hirsch, who I first noticed several months ago in Milk, despite having seen him in The Dangerous Life Of Alter Boys (2002) serveral years ago, is magnificent in such moments.

He can paint a map of emotions on his face, though his character, who probably doesn't even understand the emotions, is the only one who will ever even know these emotions are there. The range of emotions he expresses in a few brief moments of a showdown with the local toughs toward the end of the film is something to behold too.

Richard Jenkins, as Duncan's father, Edgar, is sensational; expressing confusion and anger for things he can't even begin to put words to - and doesn't. It's a beautiful and touching performance. He offers more than a few tremendously poignant scenes here as the disaffected father. The two that stand out for me include the moment when a group of local kids come by the farm to ask if Duncan can hang out with them and, later, when he discovers Duncan wearing his wife's wedding dress. I was also affected by the very brief lamp scene ("your mother would've wanted you to have this"), which ends on a sadly comic note.

Guiry is wonderful, too, in a role that could have gone any number of ways. The way Guiry plays Perry seems just right, especially as he and Duncan "discuss" kissing. It's also a heartbreaking scene. Guiry's anger and madness seem sadly too real.

The film, which deserves a far better title, also boasts a marvelous chamber score by composer Marcelo Zarvos. This is a new name to me, but Zarvos also did more recent scores for What Just Happened (2008) and You Kill Me (2007) and two films I have actually seen, The Good Shepherd (2006) and Hollywoodland (2006).

Zarvos's website - which looks painfully out of date - claims the Brazilian composer mixes world music, classical and jazz together in something he calls "world chamber music."

That is probably an ideal description for the music of The Mudge Boy too. While the film offers rock-sounding source music, Zarvos's music graces the score throughout, so perfectly reflecting the heart of darkness beating beneath the idyllic landscape. While chamber music is hardly new to film, I was reminded, for some reason, of Mark Lawrence's lovely score to Frank Perry's 1962 film David & Lisa.

These are some unrepentantly beautiful pieces disrupted by the occasionally off-key direction or the slightly off-kilter rhythm: a very jazz-like approach to classical music that never sounds like either jazz or classical music. I'd call it musical poetry.

Unfortunately, while Zarvos has gone on to some higher-profile film work that has accorded his music with official soundtrack releases, a soundtrack release of The Mudge Boy has never happened - and, at this point, is unlikely to ever see the light of day - unless the composer himself is allowed to issue the music on his own.

I hope that's the case. This Marcelo Zarvos soundtrack should be heard as much I think The Mudge Boy should be seen.
Posted by Douglas Payne at 1:11 AM

Anonymous said...
This comment has been removed by a blog administrator.
10:23 AM

BlueHost is one of the best hosting provider for any hosting plans you need.