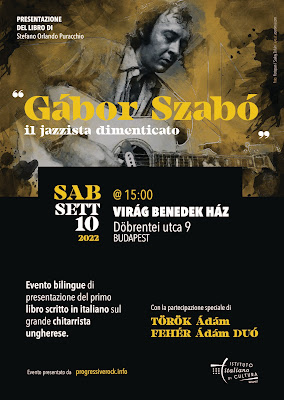 Update: I was very pleased last month to share the news of author and journalist Stefano Orlando Puracchio's September 10 presentation of his new book, Gábor Szabó – il jazzista dimenticato. The event commerates the publication of Stefano's Italian-language book and celebrates the life and musical legacy of the Hungarian guitarist.

I have just learned that keyboardist and composer Károly Németh will now join musicians Ádám Török and Ádám Fehér to perform music by and associated with Gábor. Additionally, the event is now

free and open to the public. The original announcement appears below, edited to include the updated news.

Special musical guests include flautist/vocalist Ádám Török, dean of Hungarian prog-rock and founder of the jazz-rock group Mini, along with guitarist Ádám Fehér and keyboardist and composer Károly Németh, performing a selection of material associated with Gábor Szabó. Török, who played with Gábor in a 1974 jam session, regularly features Szabó-related material in his repertoire. Bassist and collaborator of Italian jazz magazine JAZZIT Andrea Parente is also set to appear.

The event is free and open to the public. If you are in Budapest on September 10 and can visit the Virág Benedek Ház, please drop in. This is sure to be a great celebration of Gábor Szabó’s music and the incredible legacy he left behind. 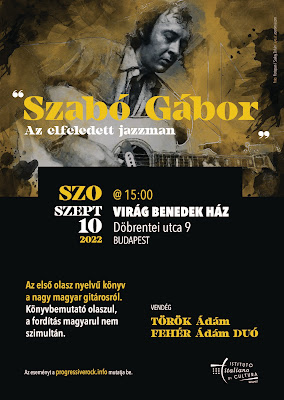 Posted by Douglas Payne at 4:38 PM