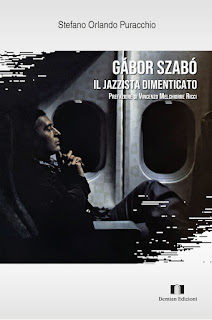 “Many believe that Szabó is not worthy to sit at the table of the 'grown-ups' of jazz. The table that seats Coltrane, Davis, Peterson, Mulligan…no. However, he is present at the same banquet, perhaps sitting at the head of a secondary table.”

Beautifully published by the Italian press Demian Edizioni on February 26, 2022 – the fortieth anniversary of the guitarist’s death – Puracchio’s book not only memorializes the life and musical journey of Gábor Szabó, but reveals just how influential and meaningful the guitarist’s legacy has become over the last four decades.

My grasp of Italian is rudimentary at best, but it is easy to pick up on Stefano’s affection for and attention to the entirety of Gábor’s music. Even more interesting to me is that he doesn’t come at Gábor from the “fan boy” frame of mind – as, perhaps, I did. While his style is anything but academic, Stefano handily places Gábor’s music in several relevant contexts.

Here, Stefano aims to dispel some of the myths (or marketing) that grew – with or without Gábor’s consent – around the guitarist and likely stifled the way people heard his music. While Szabó’s highs and lows necessarily factor into any study of the guitarist, Stefano looks beyond labels like “exoticism” (or “esotism”) and “gypsy” (the one thing Szabó biographer Károly Libisch emphatically says Gábor is not) that marginalize or “other”-ize Gábor Szabó.

”I strongly believe that only [those] who have a strong connection with Hungary (blood, love for the Hungarian culture, etc.),” Stefano told me, “have the right keys to understand deeply Gábor's music. The fact I am an Italian-Hungarian journalist gave me the necessary knowledge to avoid invalidating stereotypes. For instance, all the marketing things created to launch Gabor's solo career.

”In short, no magic, no sorceries at all: in Gábor you will find just very good Jazz linked to the lessons of Béla Bartók, Zoltán Kodály and other Hungarian musicians. Gábor is a ‘musical son’ of Bartók & Kodály. The ‘esotism’ in Gábor is not [a] real mystery’ if you know his real musical imprinting and background. Gábor [was] a very good student and researcher before [he became] a talented guitarist.” 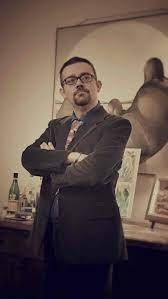 Stefano Orlando Puracchio (born Rome, 1980) is a journalist and writer who divides his time between the Abruzzo region of Italy and Hungary. His first book, “Progressive Rock - a guide” (2014), received considerable attention and praise and was followed by two other volumes on the subject, released in 2015 and 2016. The three publications were consolidated in his “Manual Minimo del Rock Progressivo” in 2018.

Stefano has also written the short-story collection “Io e il signor Oz (e altri racconti)” (Me and Mr. Oz [and other tales]) and the novels “Un Maestro Particolare” (2020) and “Caccia al Diablero” (2021). Parallel to the writing of his latest novel, Puracchio published a book of interviews with the Italian YouTube phenom Domenico Bini (or, “Il Maestro,” as his fans call him), entitled “Il Vulcano, Schana Wana e altri mondi musicali” (2021).

In “Gábor Szabó – il jazzista dimenticato,” Stefano brings a truly fresh perspective to the guitarist’s music. He offers unique insight and often witty commentary, making a compelling argument for Gábor’s “place at the table.” In addition to providing a detailed biography of the guitarist (including what Hungary was like when Gábor was growing up there), Stefano offers particularly insightful analysis of select recordings, notably “Lady Gabor” (1963), “The Look of Love” (1968) and even the curious "Keep Smilin" (1976). 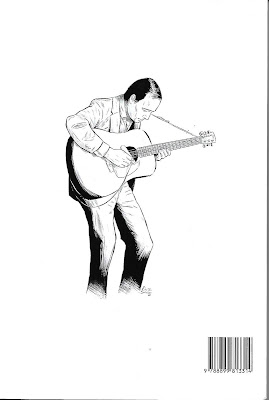 When Stefano brings Frank Zappa into the conversation, you note just how much Stefano himself brings to the table. Citing Lester Bangs’ comment that Zappa’s “Transylvania Boogie” (1970) is “in the style of Gábor Szabó,” it becomes curious that the guitarist records his own Bob James-composed “Transylvania Boogie” in 1975. Even better, Stefano marvelously refers to Small World (1972) and Belsta River (1978) as Szabó’s own Shut Up ‘N Play Yer Guitar.

Another of Stefano’s clever takes is this zinger: “Wind, Sky and Diamonds, released at the end of 1967, could be called: ‘we understand the mistakes of Simpático [the 1966 Impulse album Szabó released with Gary McFarland] and we do not intend to repeat them’.” Not sure I agree with the musical quality of that assessment. But what Stefano gets right is that the singers on the former are easier on the ears than the latter – if, that is, you want to hear singers on these records.

Stefano enhances his lively narrative with shrewd interviews with, among others, guitarist Janne Schaffer, singer Kati Kovács, two members of the Danish rock band Causa Sui (whose most recent disc is called Szabodelico) and brother John Szabó, who has long championed everything Gábor.

Although Gábor Szabó left us an amazing forty years ago – almost as long ago as he lived – Stefano Orlando Puracchio does much to not only help keep the guitarist’s legacy alive but enhance it with a completely new way of hearing this magisterial jazz legend.

“Gábor Szabó – il jazzista dimenticato” is available online or directly by writing to the publisher (at this writing, a 20% discount will be applied on the cover price). For more information, visit Demian Edizioni. A promotional video is also available on YouTube.

Wonderful review and introduction to this new book, Doug! Your "rudimentary" understanding of Italian is lightyears beyond mine, so it is our first peek at the feel and tenor of this work. Thank you for giving us a great taste of and hopes for possible English version in future.

Thanks for the review! Even if Mr. John hopes for a English version of this book, the idea to translate it in other languages is not a suitable option. First of all because this book has been specifically designed for an Italian audience. Second because in Hungarian, people can read Libisch's book. In English, you will find a book very soon! So, for a matter of courtesy among writers I will not translate the book in other languages. :) Stefano